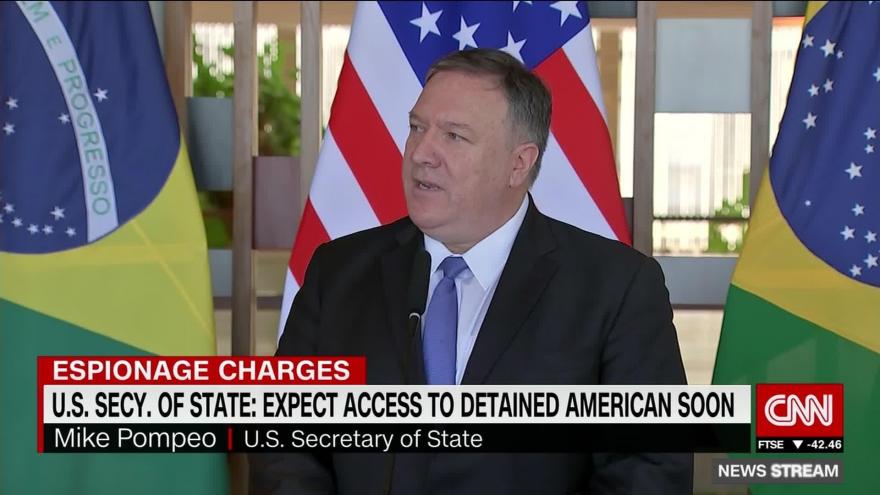 US Secretary of State Mike Pompeo said Wednesday morning he's hopeful that Russia will grant American consular officials access to Paul Whelan -- an American detained in Moscow on accusations of spying -- "within the next hours."

(CNN) -- Russia says it granted consular access Wednesday to an American citizen it accuses of spying, five days after the corporate security director was arrested in a mysterious case in which no one has publicly said what exactly he's accused of doing.

Whelan was arrested Friday in Moscow on suspicion of carrying out an act of espionage, Russia's Federal Security Service (FSB) has said. No further details about the circumstances of his arrest or the allegations against him have been released.

His family rejects notions that he was a spy, asserting that the well-traveled, discharged Marine reservist was in Russia to attend a wedding for a fellow former US service member and a Russian woman.

Earlier Wednesday, US Secretary of State Mike Pompeo said his government has made clear to Russia that the US expects to learn more about the charges.

"And if the detention is not appropriate, we will demand his immediate return," Pompeo said while on an unrelated official trip to Brazil.

When US consular officials visit Americans detained abroad, they typically provide a list of local English-speaking attorneys who can help, check whether the detainee is receiving appropriate medical care, and tell the detainee of other local or US-based resources that may help them.

The proximity in time has led to speculation by former US national security officials that the arrest of Whelan, spy or not, is Russian government retaliation for Butina's prosecution.

Family says he was with wedding party shortly before arrest

Whelan's online footprint and information from his family paint a picture of a former military man and corporate security expert who had at least some familiarity with Russia, traveling and collecting friends there, and having an account on a Russian social media platform similar to Facebook.

Whelan's twin brother has said there's no way he was a spy, and that although Paul has been to Russia previously, he also has traveled elsewhere across the globe for business and pleasure, and may know only enough Russian to get around town.

"His innocence is undoubted and we trust that his rights will be respected," brother David Whelan said.

Whelan's family and BorgWarner says he was on holiday, with the family insisting he was in Russia only to attend a retired fellow Marine's wedding and serve as a guide to wedding guests who'd not visited Russia previously.

Whelan flew to Moscow on December 22, and took a room at Moscow's Metropol hotel. By Friday, he was with the wedding party at the Kremlin, acting as a tour guide, his brother said.

When Paul didn't arrive at the wedding later Friday, the newlyweds filed a missing-person report with Russian authorities, the brother told CNN.

Paul hadn't expressed any concern about his trip, the brother said.

"Paul was mostly worried about the family golden retriever who (had) a vet appointment last week, and about his parents slipping on the ice in the Michigan winter. He was not concerned about his trip to Russia," David Whelan said.

Whelan was born in Canada to British parents, but is a US citizen living in Novi, Michigan. He served 14 years in the US Marine Corps Reserve and completed two tours in Iraq, in 2004 and 2006.

The onetime staff sergeant's service with the Reserve ended in 2008, when he was convicted at a court-martial on "several charges related to larceny," Marine Corps records show. He received a bad-conduct discharge with a rank of private.

He's had a career in corporate security, his brother said, including at BorgWarner since 2017.

Whelan's job entails making sure BorgWarner facilities are physically secure -- that they can't be stolen from or broken into -- his brother says. The company confirms his employment, but notes BorgWarner has no facilities in Russia.

Before working for BorgWarner, Paul Whelan was a senior manager in the global security and investigations group for Kelly Services, according to an interview he gave to Security Magazine in 2013.

Friends and trips in Russia

Few details about Whelan's previous travels to Russia were immediately available. But he's no stranger to the country, having been there several times for work and personal business, his brother said.

During his 2006 Iraq tour with the 3rd Marine Aircraft Wing, he even used his two weeks' leave to visit Russia.

A 2007 online Marine Corps article says he spent the leave "experiencing the post-Soviet era of Moscow and St. Petersburg." An attached photo shows him standing across the Moscow River from the Kremlin.

It also appears that Whelan had been using a Russian social media platform similar to Facebook for the past 13 years.

Photos showing Whelan have been uploaded to the VKontakte (VK) social network from around the world for years, in a profile under his name.

The last status update on the page reads "next stop, Moscow..."

Whelan appears to have posted several comments in Russian last year, including one congratulating the Russian people for "Victory Day," the day of Nazi surrender in 1945, and another one wishing a merry Christmas.

The page shows that someone last logged into the profile under Whelan's name on Friday, the same day Russian officials said he was arrested in Moscow.

When asked about the VKontakte page, Whelan's brother said he couldn't confirm the account, but accepts that he likely had one, because he had made friends in the country.

"I knew over the years he had met Russians," David Whelan told CNN Wednesday. "I don't know whether it was through work or through his Marine activity. But he'd met people while he'd been traveling around, and he connected with them on social media. And he would tell us that when he was traveling he would go visit those people."

Yet the brother said he didn't know "that Russia was specifically a place he'd like to go."

"He liked to travel wherever he could. He was been to India and Iceland, all over the place. He has friends in Russia, so that would be an extra draw, people he's met on social media, but I don't know that Russia was a particular place of return for him," David Whelan said.

Is this retaliation for Butina prosecution?

The timing of Whelan's arrest has raised speculation about whether it had anything to do with Maria Butina's legal troubles in the US.

Until her December plea deal, Butina maintained she was innocent and insisted she was a foreign student interested in bettering relations between the US and Russia. Russian officials have said they view her as a political prisoner who did nothing wrong and had been targeted for political motivations.

CNN asked Samantha Vinograd, who served on President Barack Obama's National Security Council from 2009 to 2011, whether Whelan's arrest is a Russian government response to Butina's legal problems in the US.

"(Russian President Vladimir) Putin certainly likes to take what he calls reciprocal measures, and in this case, ostensibly he would want to have some kind of bargaining chip if he chooses to try to negotiate for Maria Butina's release," Vinograd, a CNN national security analyst, told CNN's Brianna Keilar on Tuesday.

Tony Blinken, a former deputy US national security adviser and a CNN analyst, said Whelan's arrest looked like Russia's attempt at a "tit-for-tat."

"We've gone after various Russians for spying in one way or another on the United States, and what they'll do in response, and other countries have done in response, is just arbitrarily pick up someone who isn't responsible or guilty of anything, just to create pressure and leverage on us," Whelan told CNN on Wednesday.