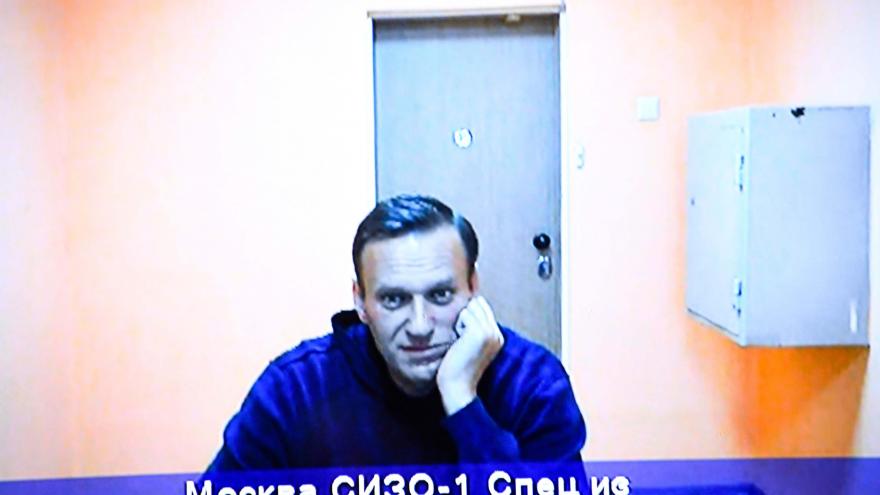 Opposition leader Alexei Navalny appears on a screen set up at a hall of the Moscow Regional Court via a video link during a court hearing of an appeal against his arrest, in Krasnogorsk outside Moscow on January 28, 2021. - ALEXANDER NEMENOV/AFP/Getty Images

(CNN) -- The foundation set up by Russian opposition leader Alexey Navalny has called on US President Joe Biden to impose sanctions on at least eight high profile Russian figures it says are close to Russian President Vladimir Putin.

Navalny's Anti-Corruption Foundation (FBK) said it had submitted a broader list of 35 people in total in a letter addressed to Biden, dated Friday, with eight named on a "priority shortlist." The letter says seven of the 35 individuals are already on US sanctions lists.

The move comes ahead of nationwide protests planned this weekend in support of Navalny, who is being held in detention ahead of a court hearing next week.

In a copy of the letter obtained by CNN, Russian billionaire Roman Abramovich is named on the "priority shortlist," for what FBK describes as being a key enabler and an alleged beneficiary of "Kremlin kleptocracy." Abramovich is the owner of English Premier League soccer club Chelsea. A spokesperson for Abramovich said in an email statement to CNN that "there is no basis for such claims which are entirely without foundation."

FBK executive director Vladimir Ashurkov, who signed the letter, told CNN on Saturday that the foundation was calling on the US to put pressure on Putin to release Navalny.

"The letter is addressed to the President of the United States -- the most powerful country. [The US] has a history of imposing sanctions on people who are involved in corruption. If anyone can do anything, it is the USA," Ashurkov told CNN.

The letter seen by CNN says Navalny for years has called for sanctions against individuals who he says are key to "aiding and abetting" Putin in the "persecution" of those who "seek to express their opinions freely and expose corruption in the [Russian] system," adding that existing sanctions don't target "enough of the right people."

"The West must sanction the decision makers who have made it national policy to rig elections, steal from the budget, and poison. It must also sanction the people who hold their money." The letter continues: "anything less will fail to make the regime change its behavior."

Ashurkov said he and Navalny had worked on the list of 35 Russians before Navalny returned to Russia from Germany earlier this month, initially focusing on the main eight.

In the letter, the list of 35 people is divided into three groups:

"We didn't want to make this list public until we did the full dossier on them. But after his [Navalny's] arrest we knew we had to act," Ashurkov told CNN.

Navalny was detained on January 17, moments after arriving in Moscow following months of treatment in Germany after being poisoned in August 2020 with nerve agent Novichok.

He's currently in custody ahead of a court hearing on February 2 where a court will decide whether his suspended sentence on fraud charges in a 2014 embezzlement case should be converted into a jail term due to what Russian authorities say is the violation of the terms of his suspended sentence.

The letter states that the eight shortlisted individuals are of "particular priority." They were discussed with Navalny shortly before he boarded the plane to travel back to Moscow, Ashurkov said.

Ashurkov said Navalny's team plans to submit the same request to the European Union and to the UK government.

In an interview earlier this week with CNN, former oligarch Mikhail Khodorkovsky, who served more than 10 years in a Russian jail after he fell out with Putin for highlighting official corruption, also said the new US administration must take the global lead to make sure his fate does not also befall Navalny.

Speaking from exile in London, Khodorkovsky said personal sanctions must be imposed by Biden and others in the West on those closest to Putin, rather than broad sectoral sanctions.

Khodorkovsky said targeting Putin's entourage would be extremely painful for the Russian President and would affect the stability of his power.