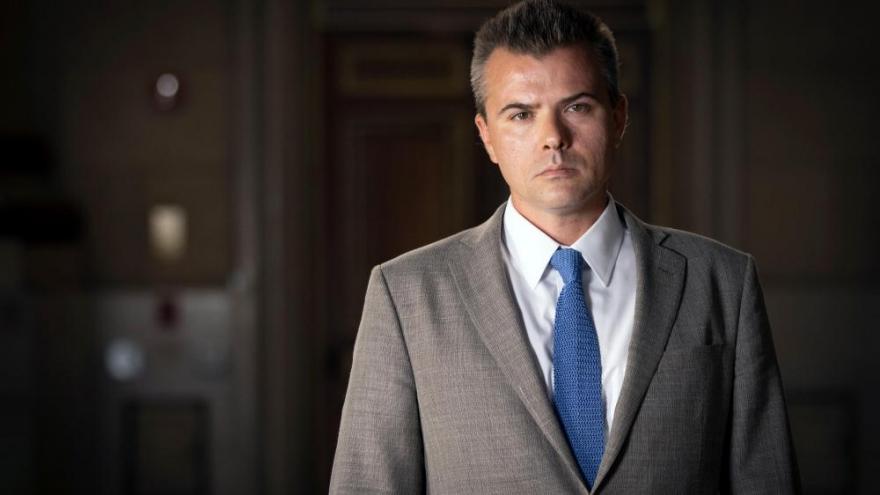 Igor Danchenko, seen here in Washington on October 2, was arrested on November 4 as part of Special Counsel John Durham's investigation into the origins of the FBI's Russia investigation.

(CNN) -- Igor Danchenko, a Russian analyst who was a source for the 2016 dossier of allegations about former President Donald Trump, was arrested and indicted Thursday for allegedly lying to the FBI, as part of Special Counsel John Durham's investigation into the origins of the FBI's Russia investigation.

He was charged with five counts of making false statements to the FBI, according to the indictment that was unsealed Thursday, and faces up to five years in prison for each count.

Danchenko was a key source of information used by former British intelligence operative Christopher Steele in a dossier that alleged Trump was compromised by ties to Russia ahead of the 2016 election. The dossier, which many of the claims in it were never proven, became one of the most controversial parts of the FBI's 2016 investigation into Trump and Russia, known as "Crossfire Hurricane," which led to special counsel Robert Mueller's investigation.

Among the salacious claims Danchenko has said he passed on was that the Russians had a tape of Trump with women that became infamously shorthanded as the pee tape. Trump has denied such an episode ever occurred.

The Trump dossier produced by Steele "as well as information collected for the reports by Danchenko, played a role in the FBI's investigative decisions and in sworn representations that the FBI made to the Foreign Intelligence Surveillance Court throughout the relevant time period," the indictment says.

In one instance, prosecutors accuse Danchenko in FBI interviews of hiding that a US-based PR executive with ties to Democratic politics was a source of his and helped him network for Steele's work.

"PR Executive-l maintained historical and ongoing involvement in Democratic politics, which bore upon PR Executive-l's reliability, motivations, and potential bias as a source of information," the indictment states.

In another, prosecutors suggest Danchenko made up an anonymous phone call he said he believed came from a Russian-American chamber of commerce leader.

The call with the chamber of commerce president was a reason the Steele dossier noted a "well-developed conspiracy of cooperation" between the Trump campaign and Russia.

Danchenko appeared in the Eastern District of Virginia later Thursday and was released by the federal court judge on a $100,000 unsecured bond. Attorneys for Danchenko did not immediately respond to a request for comment.

In September, Durham issued a new set of subpoenas, including to a law firm with close ties to Hillary Clinton's 2016 campaign, an indication that he could be trying to build a broader criminal case, according to people briefed on the matter.

But so far, Durham's two-year probe into the FBI's Russia investigation hasn't brought about the cases Republicans hoped it would.

The most recent grand jury subpoenas for documents came after Durham charged Clinton campaign lawyer Michael Sussmann with lying to the FBI in a September 2016 meeting.

Durham was appointed special counsel by former Attorney General William Barr in October 2020, but kept it secret so as not to interfere in the 2020 election.