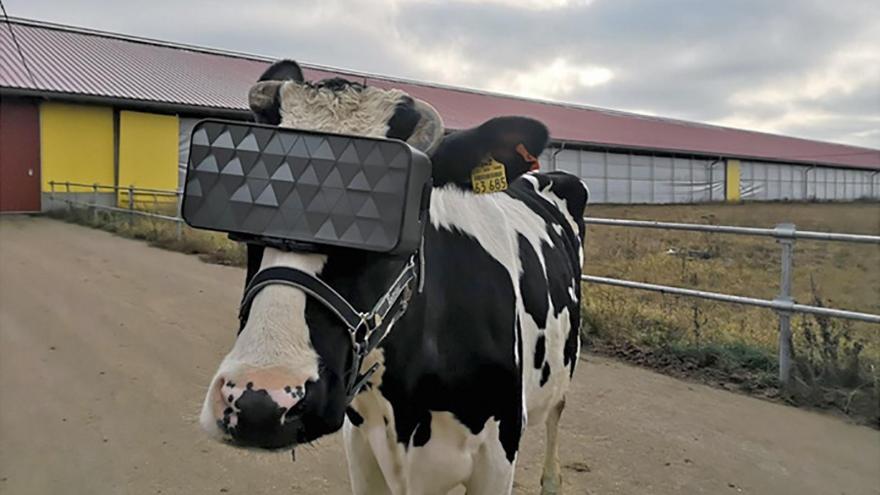 A cow wearing VR goggles is transplanted to a summer field, in an attempt to increase its mood. CREDIT: Ministry of Agriculture and Food of the Moscow Region

The technology is changing industries that many people had never thought it would, such as, *checks notes*, dairy farming?

And here you thought technology couldn't get any weirder.

A farm just outside of Moscow is testing VR glasses for its cows, it says, in an effort to increase the quantity -- and quality -- of the milk produced.

That's according to a news release published Monday from the Ministry of Agriculture of the Moscow region. It came accompanied by photos of a cow trying out its fancy new goggles.

The ministry rationalizes it like this: Studies have shown that cows' environmental conditions can impact the milk produced, specifically improving its quality or increasing its quantity.

So, a team of developers, with the help of veterinarians and consultants for dairy production, made some oversized VR glasses for cows. They adapted the human versions to account for cows' different head shapes and eyesight, the news release says. And then voila! Cow VR glasses.

And what were these cows experiencing with their new VR glasses? A wild, expansive field beneath the summer sun. A cow's (virtual) paradise.

So far, it's unclear if the glasses have helped milk production -- further study will be needed for that. But a first test did reveal a decrease in anxiety and an increase in the emotional mood of the herd, the release said.

To be fair, if we were transported to a vast field in the summertime, our anxiety and emotional mood would be better, too.

Russian dairy farmers aren't the only ones going the extra mile to keep their cows happy and improve product, though. Some Wagyu farmers set mood lighting, among other tricks, to keep their cows calm and producing the best beef possible. Others play them music, which one Missouri farmer says leads to better milk.