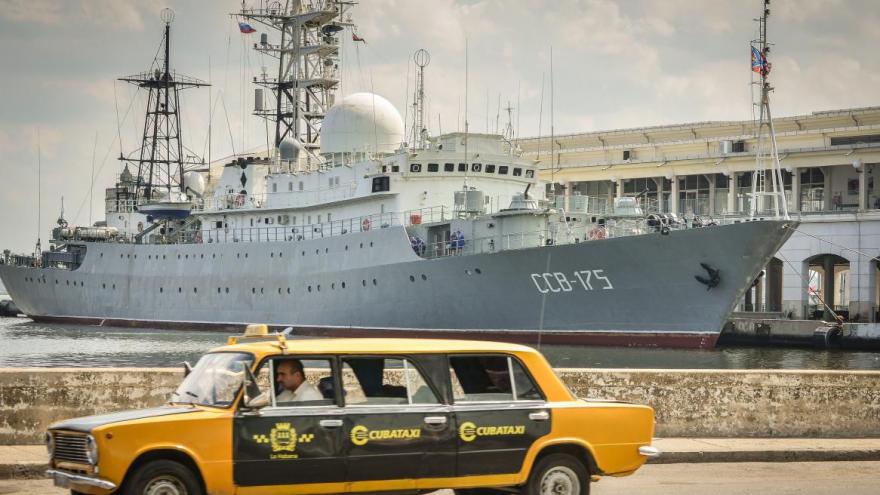 (CNN) -- A Russian spy-ship has returned to international waters off the southeastern coast of the United States and is operating in what two US officials told CNN is an "unsafe manner."

The Viktor Leonov, a Russian surveillance ship, has been sailing off the coast of South Carolina and Florida in the last few days, officials tell CNN, adding that the ship's actions were determined to be unsafe because it is not using running lights in low visibility weather and it is not responding to commercial vessels' attempts to communicate to avoid potential accidents.

The official said the Vishnya-class spy ship was also engaged in "other erratic maneuvers."

A spokesperson for the US Coast Guard confirmed to CNN that the Coast Guard was broadcasting a "Marine Safety Information Bulletin" to alert mariners in the area to the Russian ship's presence and its behavior.

"The United States Coast Guard has received reports indicating that the RFN VIKTOR LEONOV (AGI-175) has been operating in an unsafe manner off the coast of South Carolina and Georgia. This unsafe operation includes not energizing running lights while in reduced visibility conditions, not responding to hails by commercial vessels attempting to coordinate safe passage and other erratic movements," the bulletin said.

"Vessels transiting these waters should maintain a sharp lookout and use extreme caution when navigating in proximity to this vessel. Mariners should make reports of any unsafe situations to the United States Coast Guard," it added.

A defense official told CNN that the US Navy's USS Mahan, an Arleigh Burke-class destroyer, was operating close to the Russian ship.

The Viktor Leonov regularly patrols in international waters along the eastern coast of the US, having done so every year since 2015.

The Russian vessel also routinely operates in the Caribbean, including Cuba and Trinidad and Tobago.

The Russian ship's presence off the US coast comes as the US Navy's Arleigh Burke-class guided-missile destroyer the USS Ross visited Constanta, Romania, Monday for what the Navy called "a scheduled port visit," part of the US effort to bolster its presence in the Black Sea and support regional partners such as NATO ally Romania.

Russia has boosted its military presence in that area since it seized Crimea from Ukraine in 2014 and it regularly shadows American warships while they operate in the Black Sea.

"Crimea has really more or less, according to our civil society folks, has become an armed camp," the US State Department's Assistant Secretary for Democracy, Human Rights, and Labor Rob Destro, told reporters Monday as he discussed "the militarization of Crimea."

Tensions between Moscow and Washington remain high. Just days ago Russian Foreign Minister Sergey Lavrov visited the White House and repeatedly raised Russian concerns about the US potentially dismantling the last remaining nuclear arms treaty between the two powers, a move that could reignite a US-Russia arms race.