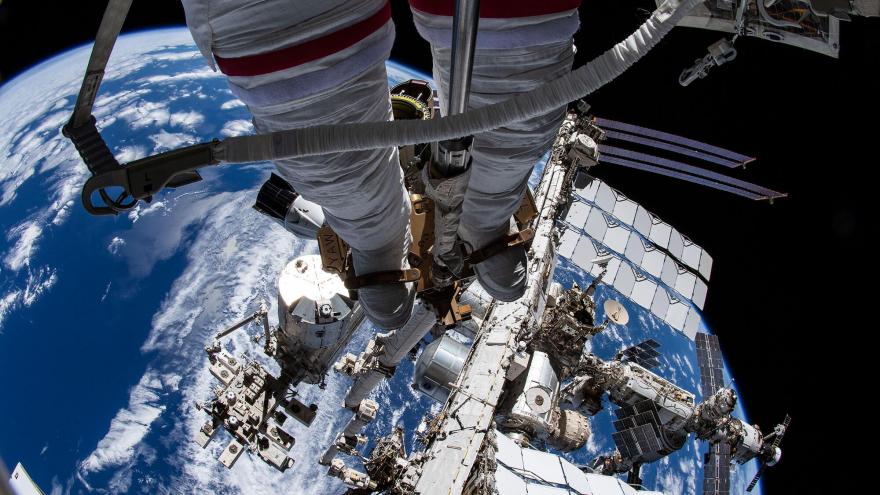 The head of Russia's space agency says new US sanctions have the potential "to destroy our cooperation" on the International Space Station.

(CNN) -- The head of Russia's space agency says new US sanctions have the potential "to destroy our cooperation" on the International Space Station. There are currently four NASA astronauts, two Russian cosmonauts and one European astronaut living and working on board the orbiting outpost.

After President Joe Biden announced new sanctions Thursday that "will degrade their (Russia's) aerospace industry, including their space program," Roscosmos Director General Dmitry Rogozin said on Twitter that the station's orbit and location in space are controlled by Russian engines.

"If you block cooperation with us, who will save the International Space Station (ISS) from an uncontrolled deorbit and fall into the United States or...Europe?" Rogozin said. "There is also the possibility of a 500-ton structure falling on India and China. Do you want to threaten them with such a prospect? The ISS does not fly over Russia, therefore all the risks are yours. Are you ready for them?"

A NASA spokesperson told CNN that it "continues working with all our international partners, including the State Space Corporation Roscosmos, for the ongoing safe operations of the International Space Station."

The ISS, which is a collaboration among the US, Russia, Japan, Canada and the European Space Agency, is divided into two sections -- the Russian Orbital Segment and the US Orbital Segment.

NASA has not responded directly to Rogozin's remarks, but it notes that the US space agency "continues working with Roscosmos and our other international partners in Canada, Europe, and Japan to maintain safe and continuous ISS operations."

But British Prime Minister Boris Johnson explicitly questioned the future of the International Space Station while speaking on the floor of the House of Commons on Thursday.

"I've been broadly in favor of continuing artistic and scientific collaboration," Johnson said. "But in the current circumstances, it's hard to see how even those can continue as normal."