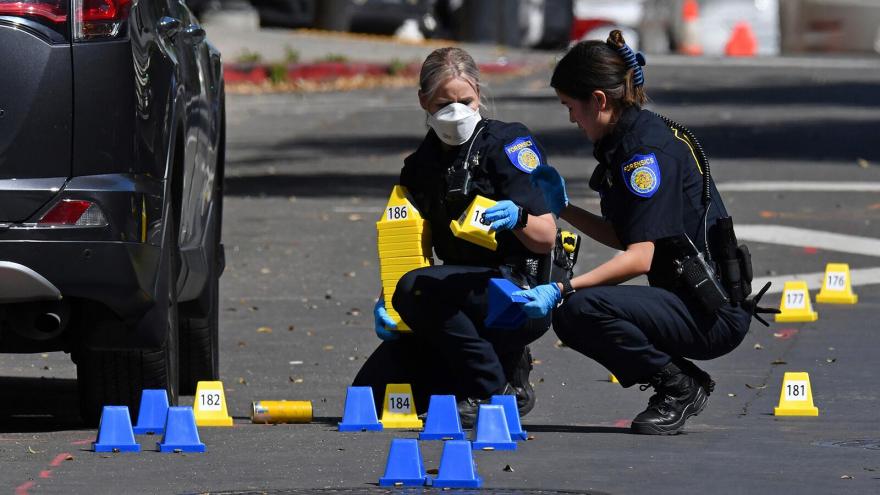 (CNN) -- An urgent search is underway for multiple suspects after a shooting in downtown Sacramento, California, left six people dead and 12 others injured early Sunday morning.

"Investigators are working to identify those responsible for this horrific act. We know that a large fight took place just prior to the shootings. And we have confirmed that there are multiple shooters," Sacramento Police Chief Katherine Lester said Sunday afternoon.

Three men and three women were killed, Lester said, and the injured were rushed to area hospitals. The coroner's office is working to identify and notify families of the victims, she said.

Investigators were interviewing a number of witnesses and located hundreds of pieces of evidence from the scene, including a stolen handgun, Lester said.

Officers quickly responded to the scene near 10th Street and K Street after hearing gunshots around 2 a.m. and seeing people running, the police chief said.

When they arrived, officers discovered a large crowd and multiple gunshot victims.

"Officers began to give medical aid, including CPR, to the victims that they found and at the same time worked to stabilize the scene and learn what they could about the crime," Lester said at a Sunday news conference.

Police worked alongside members of the California Highway Patrol and the Sacramento Fire Department at the scene, she said. "All of our agencies tried to save lives."

Social media video appears to show an altercation before the shooting, police said in a statement. "We are currently working to determine what, if any, relation these events have to the shooting," the statement said.

The scene is within a few blocks of several notable landmarks: the California State Capitol, Sacramento City Hall and the Golden 1 Center, which hosts concerts and sporting events.

A large crowd was gathered in the area when gunfire erupted but it was unclear whether the crowd was connected to a particular venue or event, Lester said.

Members of the public have sent in tips and video related to the shooting, the chief said, and part of the incident was captured by a nearby police camera.

"We are shocked and heartbroken by this tragedy but we are also resolved as an agency to find those responsible and to secure justice for the victims and their families," Lester said.

Sacramento Mayor Darrell Steinberg called the shooting "a senseless and unacceptable tragedy" that had left California's capital city with "a broken heart."

He said Sacramento would continue to invest in programs addressing early intervention and violence prevention for young people.

"In our city we will take stock and we will do everything we can on the investment side, on the public safety side, on the gun side, to protect the public."

California Gov. Gavin Newsom noted the shooting had left multiple families grieving. "The scourge of gun violence continues to be a crisis in our country, and we must resolve to bring an end to this carnage," he said in a statement.

President Joe Biden noted Sacramento was "another community devastated by gun violence," and called on Congress to act on gun control measures.

"In a single act in Sacramento, six individuals left dead and at least a dozen more injured. Families forever changed. Survivors left to heal wounds both visible and invisible," he said in a statement.