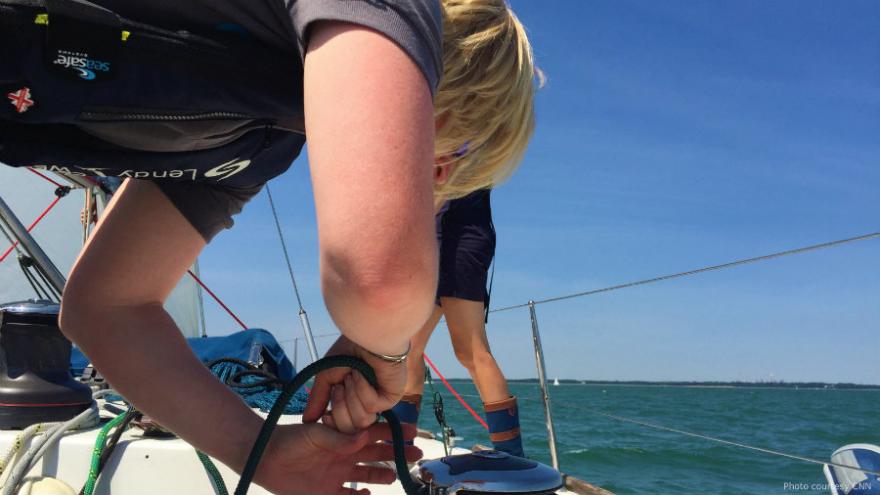 (CNN) -- During a rare spell of sunny hot weather in England, gold medalist Lucy Hodges takes the helm of a monohull off the coast of the Isle of Wight.

She makes the task of steering a yacht look easy as it sails smoothly to a buoy just 100 yards ahead, despite the Solent's tidal changes, strong winds and notorious Bramble Bank sandbar.

But it's not as easy a task as you might think.

"When you drive a car you keep the wheel straight when you want to go straight" she told CNN Sport, "but when you're driving a yacht there's lots of different elements that change the force."

There's another complication for Hodges though -- she can't see the buoy. In fact she also can't clearly see the coastline surrounding her.

Born with photophobia nystagmus -- a condition that causes involuntary movement of the eyes and affects eyesight -- it's here, on the water, where Hodges has always felt most independent.

"When you're on land everything is moving but when you're out on the boat, things are changing but it's changing with the wind and for natural reasons."

Hodges instead relies on her other senses -- touch and sound -- to navigate when she's racing.

"You find that people with visual impairment tend to take the natural senses that they use to compensate for not having sight. We naturally feel the breeze on our faces and we listen to how the boats are moving through the water and we feel the boat through our body."

She says there's no better feeling than being on the water.

She accomplished it again in 2017 in the US after a convincing victory in the B2 division where competitors have limited vision.

In August, Hodges will be competing at Lendy Cowes Week -- a regatta that's been taking place since 1826 and is one of the oldest in the world. The event takes part at the Isle of Wight from August 4 where over 800 boats compete in up to 40 different classes.

It's not the first time Hodges has competed at the regatta and she remembers well how chaotic the start of the race can be.

"Last year we were right on the line in the mix of everybody and just literally jammed between all the other big 50ft yachts," she remembers, but it's moment like these which thanks to her confidence and other senses -- the boats always come out unscathed.

Hodges says her life has always revolved around water. Not only has she been sailing since she was 16 years old -- she was introduced to the sport by her father -- but she also used to compete in swimming at an elite level.

"I did the Beijing trials and got the two British records there but I wasn't quite quick enough to represent Great Britain," she says.

When she's not training, Hodges spends her time working on Brexit at her full-time job with the UK government and as commodore of the charity, GBR Blind Sailing.

It's the charity work which is her passion, she says, where she helps blind and partially sighted people achieve not only confidence, but their dreams. That work was recognized in 2014 when she was awarded an MBE (Member of the Order of the British Empire).

"It's a proud moment in my life to have got that especially from the Queen," she says.

With the Blind Sailing charity, Hodges helps those not only born visually impaired but those who have lost their sight during adulthood, providing sailing training, as well as educating sighted people on what it's like to sail blind.

"We saved a lady from suicide two years ago," she says. "She had full sight and she was a sailor, she loved her sailing and she woke up one morning and both retinas had detached and they didn't go back on."

"She just shut off life but she said to one of her friends if I won gold then she'll get involved and see if she can sail again and luckily enough we won ... she came to us and she was physically shaking, she said she was so nervous -- that (making the journey to us) was her biggest step but we got her out on the water again and it changed her life."

Hodges, who also visits various schools as a guest speaker, says she's there to help anyone.

"It's not just about being on the water with us, it's about life and everything.

Hodges has also been nominated for the Cowes Week Ladies Day Trophy which celebrates female talent in sailing.

"Women can be skippers of a boat alongside men, there is nothing you need to change or do with sailing -- it's down to technical skills, working as a team, having the knowledge of the water, planning, looking at your racecourse. Men and women can do equally well," she says.

"I think more and more women are getting into sport and have the opportunity. I certainly never felt as a woman that I couldn't go sailing or I couldn't race."

Hodges is especially keen for women to return to sailing after they have had children.

"It seems to be a pattern, they get married and they have children and they do have that gap (after giving birth) but it's just about having the opportunities to come back in."

After Cowes Week, Hodges' next goal is to get her third gold medal in September, this time at the Blind Match Racing World Championships in Scotland. However, she's having to ease herself back into training after a bout of meningitis.

"I'm trying to get back to fitness and not over-strain my body," she says.

"I've just reduced my training to once a month but I normally try to do six days a month.

"I've had to learn how to appreciate my body. It's more about getting my stamina and my fitness up on land and that helps with the water because of my fatigue with meningitis."

After hopefully winning gold, Hodges then wants to dedicate all her time to charity.

"It's what I want to do in life," she says, "It's my passion to take my life and spin it around and help those -- especially who are just starting in school."

"You never know which student you're going to help -- as long as there's one in the school.

"That's the aim and the goal -- I don't want to be doing Brexit for much longer," she laughs.