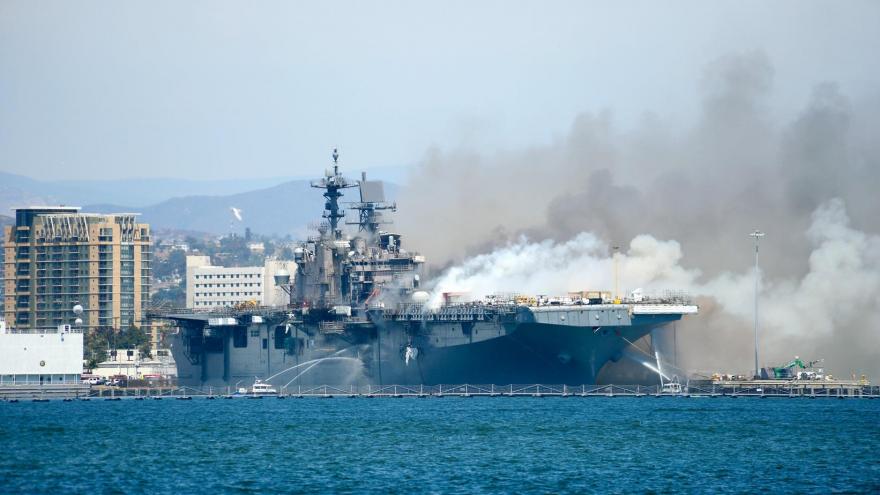 The blaze aboard the billion-dollar Navy warship was extinguished after raging for four days.

(CNN) -- A US sailor is being questioned over the possibility that they may have intentionally set a fire that caused extensive damage to the USS Bonhomme Richard at Naval Base San Diego last month, two US defense officials told CNN.

"There is a potential suspect," one official said, emphasizing no one has been charged and the investigation continues. The Navy declined to comment on an active investigation.

The blaze aboard the billion-dollar Navy warship was extinguished after raging for four days. The ship had been docked in San Diego for maintenance when the fire broke out. Sailors were beginning to fight the fire when a subsequent explosion caused the vessel to be evacuated.

The Bonhomme Richard is designed to support Marine Corps operations. It can transport Marines and equipment for a Marine expeditionary unit and land them in hostile territory via landing craft or helicopters, as well as provide air support by helicopters or attack aircraft.

The amphibious assault ship was being upgraded to accommodate some of the newest and most sophisticated warplanes in the US arsenal, Marine Corps F-35Bs.

It was to be one of only four ships in the US fleet with the ability to handle the F-35Bs. For now, the USS America -- a newer version of the amphibious assault ship capable of deploying F-35s -- is filling in for the Bonhomme Richard, operating out of the US Navy base in Sasebo, Japan.

"As tensions mount with China in the South China Sea, as well as with North Korea, the loss of this ship and her capabilities will make it more difficult for the Navy to meet all its war-fighting requirements," CNN military analyst John Kirby said last month.

Still, despite all the problems the fire has created, Kirby said they can be overcome.

"My goodness, if our strategy in any given part of the world hinges on the availability of one particular ship, well, we've got much bigger fish to fry," Kirby said.