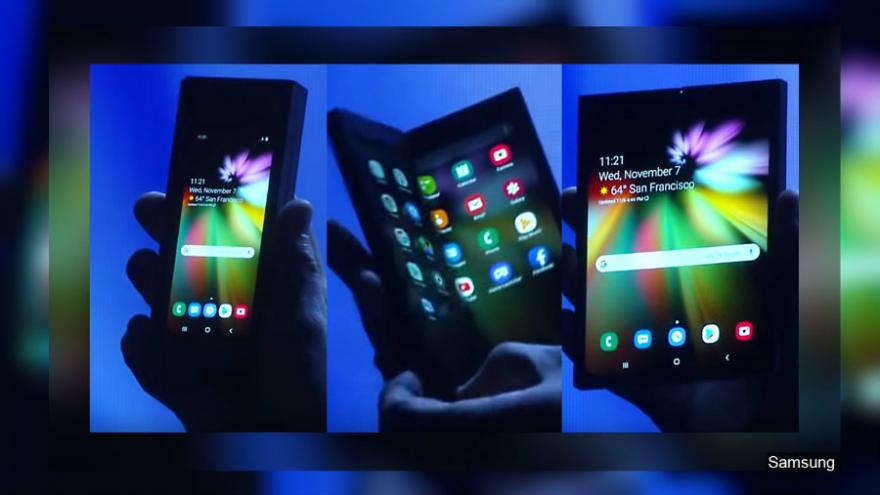 SAN FRANCISCO (AP) — For the past few years, the smartphone industry has been searching for a breakthrough to revive a market mired in an innovation lull and a sales slump. A potential catalyst is on the horizon in the form of flexible screens that can be folded in half without breaking.

Samsung and several rivals are preparing to roll out such screens to make devices more versatile for work and pleasure. The foldable screens could increase display space to the size of a mini-tablet, but fold like a wallet so they revert to the size of regular phones. But there are questions about price and durability.

If the new phones fulfill their makers' ambitions, they will become a leap ahead for an industry whose origins can be traced to the old flip phones that consumers once embraced as cool and convenient. Foldable-screen phones, though, won't need hinges because they have continuous displays that can bend.

In an indication of how difficult it is to make a flexible screen that's also durable, Samsung first announced plans to build a folding-screen phone five years ago. It wasn't until Wednesday, though, that Samsung finally provided a glimpse at what it's been working on.

"We have been living in a world where the size of a screen could only be as large as the device itself," said Justin Denison, Samsung's senior vice president of mobile product marketing. "We have just entered a new dimension."

Except for a fleeting look at a device he held in a hand, Denison provided scant information about the phone. Samsung says it will be ready to hit the market at some point next year.

Smartphone makers are looking for something to excite consumers as they replace phones less often because new models are pricey and aren't that much different from their predecessors beyond slightly better cameras and batteries.

That's the main reason worldwide smartphone sales have fallen from the previous year for four consecutive quarters, according to IDC. Add it all up, and smartphone sales declined by 4 percent during 12 months ending in September. Samsung, the world's leading seller of smartphones, suffered a 7 percent decline in shipments during that period, based on IDC's calculations.

But it's not clear whether flexible-screen phones will have mass appeal, especially when the bendy devices are expected to cost more than $1,000. Royole Corp., a small Silicon Valley company, is hoping to sell early versions of its FlexPai foldable-screen phone for $1,300 to $1,500 once it comes to the U.S. — something that won't happen until next year, at the earliest. For now, it will be available in China starting next month, at a price equivalent to about $1,300.

While the idea of a device being able to bend into different shapes may sound good, IDC analyst Ramon Llamas is skeptical about how practical and durable they will be. One of the biggest questions is whether the quality of the screens will degrade as they get repeatedly folded. "Are people really going to want to watch a Netflix show on these devices if there is a crease down the middle of it?" Llamas said.

Royole said its FlexPai can be bent more than 200,000 times without deteriorating.

Other foldable-screen phones running Google's Android software are expected to be available, too. Huawei confirmed last month that it is working on a phone with a flexible screen. LG Electronics is widely expected to unveil one at the CES gadget show in Las Vegas in January. LG didn't respond to a request for comment.

"Everyone has been thinking about the same question: 'What's next? Is there nothing more from a smartphone?'" Royole CEO Bill Liu said.