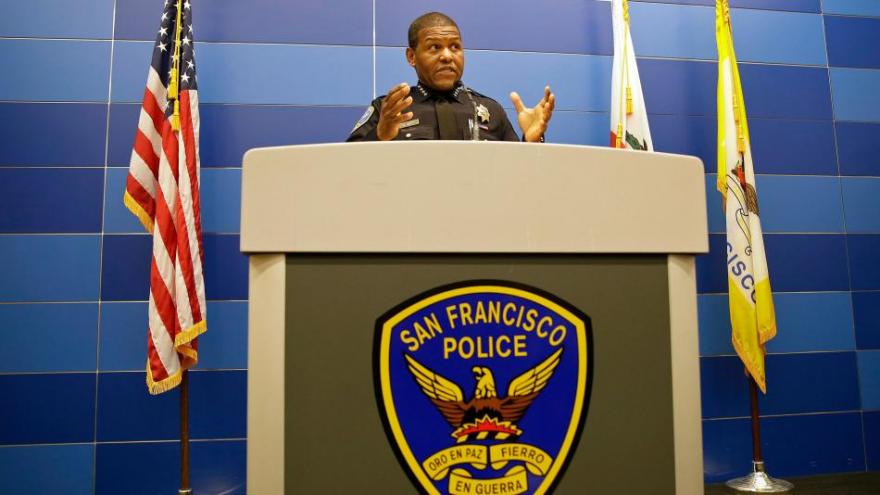 San Francisco Police Chief William Scott says mug shots will be released only when necessary to warn people of imminent danger or to ask for the public's help in locating individuals.

"With a thoughtful process for releasing booking photos, law enforcement agencies may help mitigate or avoid perpetuating negative stereotypes which can contribute to implicit and explicit bias in policing and by community members," Scott announced in a notice to the department.

The SFPD will continue releasing mug shots when "necessary to warn the public of imminent danger or to enlist the public's assistance in locating individuals, including at-risk persons," the department said in a news release about the policy change, but those will be the only exceptions to the new rule.

"This policy emerges from compelling research suggesting that the widespread publication of police booking photos in the news and on social media creates an illusory correlation for viewers that fosters racial bias and vastly overstates the propensity of black and brown men to engage in criminal behavior," Scott said in the news release.

When someone is arrested, their picture is taken as part of the booking process. These images are frequently posted on law enforcement websites, shared on social media accounts and used in media reports. The photos stay in the public domain even when a person is not prosecuted or is found not guilty. In some cases, commercial websites publishing mugshots charge a fee to remove the images, a practice now prohibited in several states.

Jack Glaser, a professor of public policy at the University of California, Berkeley who is one of the SFPD's academic partners, spoke to CNN about the psychological phenomenon of "illusory correlations" and its connection to racial bias.

"When two rare things occur simultaneously, our minds tend to overestimate the relationship between those two things," explained Glaser, who also studies discrimination and stereotyping. "Crime is a rare event for most of us, and minority status is by definition a rare event."

When the portrayal of crime and that of minorities are paired in the media, such as in the case of the publication of mug shots of Black people, "that has an influence on the mental association between Blacks and crime," Glaser told CNN.

Even in cases when the portrayal of criminal activity is racially balanced, "the distinctiveness of blackness and crime going together stands out in people's perceptual field and is more likely to be remembered," he added.

Jennifer Eberhardt, a professor of social psychology at Stanford University, is also an academic partner of the San Francisco Police Department consulting on implicit biases and their real life implications for Black and brown communities.

Eberhardt told CNN about the "other race effect," which highlights how people are better at recognizing faces of their own race than faces of other races. "People tend to think of the faces of other races in categorical terms, so that's one of the things that can feed into this situation," she argued.

In an experimental study she conducted, people were asked to recognize the contents of images depicting weapons like guns or knives. The images went from blurrier to progressively clearer.

Eberhardt observed that if the study participants were previously shown pictures of Black people before being presented with the blurry images of weapons, they could more quickly recognize the weapons in the blurry pictures.

"That's an example of how this Black-crime association is so strong," Eberhardt told CNN. Repeated exposure to mug shots of Black and brown people in the news or on social media "is encouraging this association between race and crime," she added.

RELATED: Black police officer: I feel torn between my race and my badge

Glaser and Eberhardt say the SFPD's new rule is a positive step as police departments across the country examine how their policies and practices may contribute to racial bias in policing.

Scott's department notice allows the policy to be enacted immediately, SFPD spokesman Matt Dorsey said. The chief initiated a Department General Order to be passed by the Police Commission, which will make the policy permanent.

San Francisco Police Commissioner John Hamasaki, who has been a proponent of changing the rules for the release of booking photos, called the SFPD's new rule "an excellent first step."

"Just because somebody is arrested doesn't mean they are responsible for whatever acts they've been arrested for. That's why we have a presumption of innocence in this country enshrined in our Constitution," Hamasaki, a criminal defense attorney, told CNN. In the age of social media, a mug shot posted online "doesn't go away," Hamasaki said, and it can have long-lasting negative consequences for a person's career prospects and reputation.

Hamasaki says his hope for the new policy is that it prompts "a broader discussion in other departments and other jurisdictions," he said.

"I hope it sweeps the country," he added.