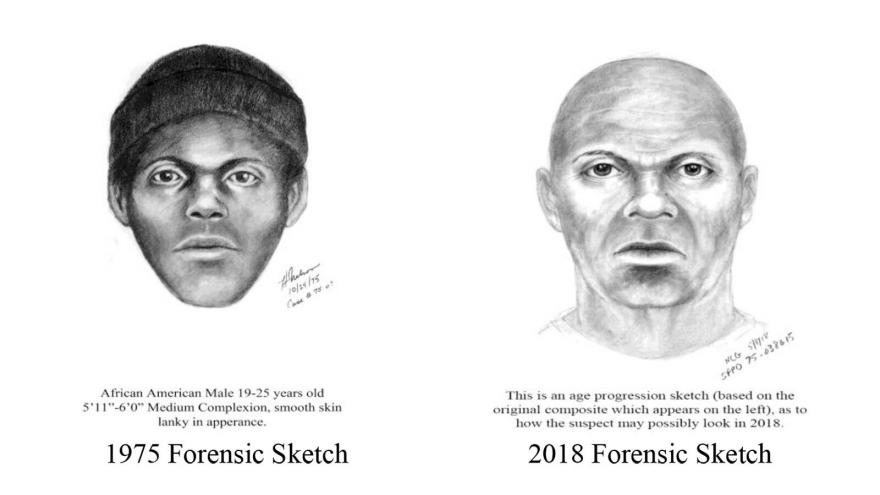 "The Doodler," a suspected serial killer who targeted gay men in San Francisco in the 1970s, is seen in composite sketches from 1975 and one from a few years ago, showing age progression.

(CNN) -- San Francisco police have doubled the reward for information leading to the arrest of a suspected serial killer known as "The Doodler" who targeted members of the city's gay community in the 1970s -- including a possible sixth victim publicly identified Thursday.

The reward for information leading to the "identification, apprehension and conviction" of the Doodler now stands at $200,000, the SFPD said -- 48 years to the day the killer's first victim was found.

The idea that Andrews could be a victim of the Doodler was explored in a San Francisco Chronicle series and podcast last year.

Police believe the Doodler -- named because one of his surviving victims told police the suspect said he was a cartoonist -- is responsible for at least five other killings around the Ocean Beach and Golden Gate Park areas of San Francisco between January 1974 and June 1975. All six victims are believed to be gay White men, police said.

Other suspected victims survived the assaults. One, police said in the crime bulletin, met the suspect in July 1975 at a diner after the bars had closed. The suspect was attending art school and studying to be a cartoonist, he told the victim, who also had a background in art and thought the suspect was talented.

It was this victim who gave investigators information that led to a forensic sketch in 1975 (An updated sketch was released in 2019 that showed the suspect's anticipated age progression). Police received a tip soon after with the name of a suspect, according to the SFPD's bulletin, which was followed by others who contacted police and named the same suspect.

"The person named was interviewed by SFPD Homicide in January 1976 and was considered a strong suspect," SFPD said Thursday. "This same person interviewed by police in 1976 is still the focus of our investigation in 2022."

Over the years, police have been examining at least five suspected victims: The first was 50-year-old Gerald Cavanagh, a mattress factory worker who was found dead with multiple stab wounds on Ocean Beach the morning of January 27, 1974. In addition to Cavanagh and Andrews, victims included Joseph Stevens, Claus Christmann, Frederick Capin and Harald Gullberg.

A 2014 article in "The Awl" helped renew interest in the case, but more attention followed after advances in DNA technology that led investigators to a suspect in the case of the Golden State Killer. In that case, Joseph DeAngelo pleaded guilty to raping more than 50 women and murdering 13 people and was sentenced to life in prison without the possibility of parole in August 2020.