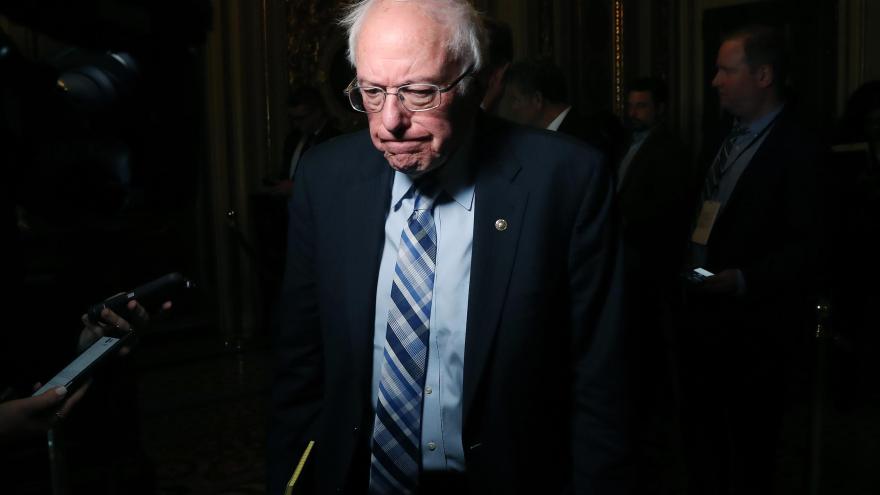 (CNN) -- Bernie Sanders leads the race for the Democratic nomination in New Hampshire, according to a new CNN Poll conducted by the University of New Hampshire.

Sanders' edge in New Hampshire, a state he won by more than 20 points in the 2016 primaries, comes as polling from CNN and others in Iowa and nationally shows him gaining ground. In New Hampshire, he has edged up 4 points since the last CNN/UNH poll there in October. Warren has slid 6 points in that time. Biden holds about even with his October support and Buttigieg has gained 5 points.

As in polling elsewhere, shifting preferences among liberals have changed the dynamic of the race: Sanders has gained 13 points among liberal likely primary voters in New Hampshire while Warren has dropped 7 points. Sanders now holds a clear lead within that group: 39% back him, 21% Warren.

The Vermont senator has also made gains since October among women (rising from 19% to 27%), and among registered Democrats (from 20% to 29%).

And when asked who they think will win the primary in New Hampshire, nearly 40% of likely Democratic primary voters name Sanders (39%).

About half (49%) of likely Democratic primary voters in New Hampshire say they are still deciding on their choice, outweighing the 3 in 10 who are firm in their choice (31%). Another 20% say they are leaning toward their candidate but haven't yet definitely made up their minds.

Those who have definitely decided on whom to support, though, are more apt to be Sanders supporters than other likely primary voters: 37% in that group back Sanders, 18% Buttigieg, 17% Biden and 12% Warren.

The survey counts as a qualifying poll for the next Democratic debate in February, and among those who have not yet qualified for the stage, both Yang and Gabbard reach 5%.

With this and the Washington Post/ABC News poll released overnight, Yang qualifies for the February debate, Gabbard would need three more.

Sanders, Warren and Biden each remain well-liked among the pool of likely Democratic primary voters, with majorities holding favorable views of each. Several candidates have made big gains in favorability since the October survey, however, with Yang leading the pack. More than half, 52%, now say they have a favorable view of Yang, up 16 points since October and the largest gain for any candidate. Buttigieg's favorable rating has climbed nine points and he now stands between Sanders and Warren at the top of the field with 64% holding a favorable view of him. Steyer's numbers have also risen nine points to 40% favorability. And Klobuchar's favorability ratings continue to rise, landing six points higher at 46% in this poll.

Sanders and Buttigieg run about even when asked who in the field is most likable (24% Sanders, 22% Buttigieg), with Biden at 14% and Yang at 11%. The women in the field -- Klobuchar, Gabbard and Warren -- all trail in single digits.

Voters are divided over who can best handle the economy, with 18% saying Biden, 17% saying Sanders, and 16% saying Warren. Steyer also lands in double-digits here with 12% naming him.

Biden holds a wide edge on foreign policy (39% say he is best able to handle it, followed by 16% for Sanders and 11% for Warren).

The former vice president is also most likely to be seen as having the best chance to win in November: 41% name Biden, up five points since October, with 20% naming Sanders, and just 8% for Buttigieg and 6% for Warren. Three in 10 Biden backers say they see him as having the best chance to win, though he is not the candidate they like best. Those figures stand at just 9% for Sanders supporters and 6% among Buttigieg backers.

But Biden, Warren, Buttigieg and Klobuchar each would inspire less enthusiasm should they become the Democratic nominee than would Sanders. Overall, 41% say they would be enthusiastic should Sanders capture the nomination, 34% if Buttigieg topped the ticket, 31% if it was Warren, 30% if it was Biden and 23% should Klobuchar carry the day.

But perhaps the lack of interest is due to the lack of competition on the Republican side. Nine in 10 likely Republican primary voters back President Donald Trump for his party's nomination, and almost three-quarters (73%) say they have definitely decided whom to support. The President's major competitors each hold less than 5% support in the poll.

Statewide, the poll finds Trump's approval rating at 50%, up from 44% in an October survey. That includes a boost among Republicans and among independents. At the same time, however, fewer New Hampshire residents say they will definitely or probably vote to reelect the President (46%) than say they will definitely or probably vote against him (49%). Those firmly committed against the President (43%) outpace those solidly behind him (37%).

New Hampshire remains tilted against removing Trump from office through the impeachment trial currently underway in the Senate. In October, 51% said Trump should not be impeached and removed. In the new poll, 50% disapprove of the House's decision to impeach the President, and 53% say the Senate should not vote to remove Trump from office. Views on both questions are sharply divided by party.