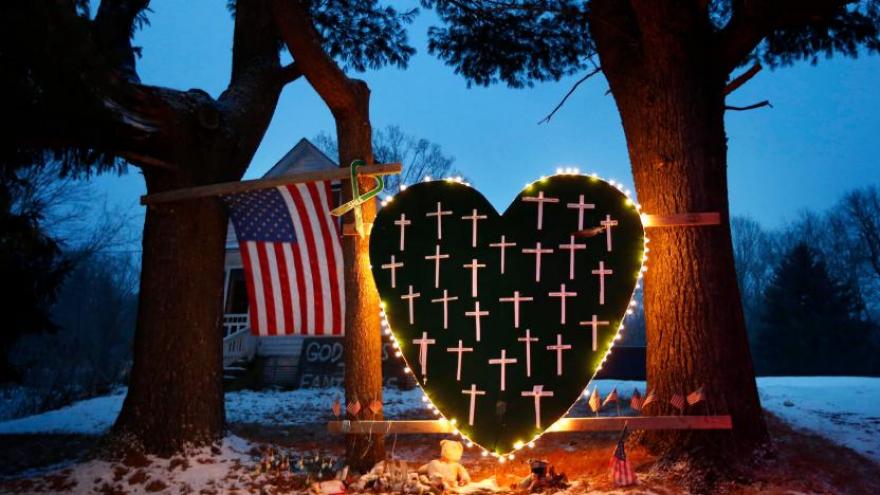 The families of five children and four adults killed in the 2012 Sandy Hook Elementary School shooting have reached a $73 million settlement with the now-bankrupt gun manufacturer Remington and its four insurers, the plaintiffs' attorneys said February 15.

(CNN) -- The families of five children and four adults killed in the 2012 Sandy Hook Elementary School shooting have reached a $73 million settlement with the now-bankrupt gun manufacturer Remington and its four insurers, the plaintiffs' attorneys said Tuesday.

The settlement comes more than seven years after the families filed a wrongful-death lawsuit against Remington, the manufacturer of the Bushmaster AR-15-style rifle used in the massacre that left 20 children and six adults dead in Newtown, Connecticut.

The families have also "obtained and can make public thousands of pages of internal company documents that prove Remington's wrongdoing and carry important lessons for helping to prevent future mass shootings," the plaintiffs' attorneys said in a news release.

"We established what was clearly true ... the immunity protecting the gun industry is not bulletproof," plaintiffs' attorney Josh Koskoff said in a news conference in Trumbull, Connecticut. "We hope they realize they have skin in the game, instead of blaming literally everybody else."

The families sued Remington in 2014, alleging it should be held partially responsible for the shooting because of its marketing strategy. A 2005 federal law protects many gun manufacturers from wrongful death lawsuits brought by family members -- but the marketing argument was a new approach.

Lawyers for the plaintiffs contended that the company marketed rifles by extolling the militaristic qualities of the rifle and reinforcing the image of a combat weapon -- in violation of a Connecticut law that prevents deceptive marketing practices.

The US Supreme Court in 2019 decided not to take up an appeal by Remington, effectively allowing the suit to move forward.

The settlement also should be a warning to insurance companies covering gun manufacturers, Koskoff said.

"Insurance companies, it's time for you to start treating the gun industry like you treat me every time I get a speeding ticket. ... You raise my rates," he said. "Have you ever heard of an insurance company standing behind an insured that has no care whatsoever for the risk they're creating? ... Where is the oversight? This can be done."

Relatives of the victims spoke at the news conference to remember their loved ones and celebrate the settlement.

"This landmark, historic victory sends a forceful and compelling message to manufacturers and to the insurance and banking industries that support them: This is a high-risk market, it is not profitable, and you will be held accountable," said Nicole Hockley, whose 6-year-old son Dylan was killed in the shooting.

Hockley said she had promised, after her son's death, to create change that would prevent mass shootings.

"Nothing will bring Dylan back. The closest I get to him now is by kissing his urn every night, telling him I love him and I miss him," Hockley said. "But I made him a promise, and I'll keep working to deliver that promise for the rest of my life.

"My hope for this lawsuit is that by facing and finally being penalized for the impact of their work, gun companies along with the insurance and banking industries that enable them will be forced to make their practices safer than they've ever been, which will save lives and stop more shootings."

The families did not accept the earlier proposal "because they wanted to ensure they had obtained enough documents and taken enough depositions to prove Remington's misconduct" and to "to ensure the case's message to the insurance industry was clear," Tuesday's news release reads.

Lenny Pozner and Veronique De La Rosa, whose son Noah was killed in the shooting, said their loss is "irreversible, and in that sense, this outcome is neither redemptive nor restorative."

"One moment we had this dazzling, energetic 6-year-old little boy, and the next all we had left were echoes of the past, photographs of a lost boy who will never grow older, calendars marking a horrifying new anniversary, a lonely grave, and pieces of Noah's life stored in a backpack and boxes."

"What is lost remains lost. However, the resolution does provide a measure of accountability in an industry that has thus far operated with impunity. For this, we are grateful," Pozner and De La Rosa said.

In 2020, Remington filed for Chapter 11 bankruptcy protection for the second time in just over two years.