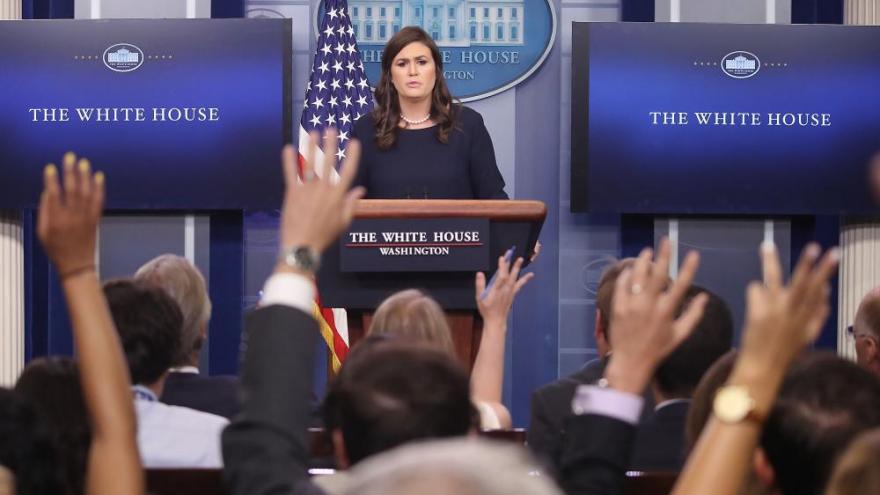 Former White House Press Secretary Sarah Huckabee Sanders speaks to the media during the daily press briefing at the White House on July 26, 2017 in Washington, DC.

"With the radical left now in charge of Washington, your governor is your last line of defense. In fact, your governor must be on the front line," Sanders said in a nearly eight-minute video posted on Twitter. "So today, I announce my candidacy for governor of Arkansas."

She also notes the riot at the Capitol earlier this month as an example of lawlessness in the country.

"We've seen violence in our streets, at a congressional baseball practice and at our Capitol. This is not who we are as Americans. To remain free, we must have law and order," she says in the clip.

Sanders had been seen as a likely candidate ever since she left the White House in the summer of 2019. The daughter of former Arkansas Gov. Mike Huckabee will likely face a primary challenge -- multiple top Republicans in the state have already announced a bid -- but she is widely seen as an early favorite for the position. A source familiar told CNN of Sanders' plan to run for office on Sunday.

Asa Hutchinson, the current governor of Arkansas, is term limited.

The governor's mansion is expected to stay in Republican control. While the state has elected Democrats in recent history -- from former governor and President Bill Clinton to former Sen. Mark Pryor more recently -- Arkansas has politically veered right over the last decade. The state backed Trump with more than 62% of the vote in November.

"Sarah Huckabee Sanders is a warrior who will always fight for the people of Arkansas and do what is right, not what is politically correct. Sarah is strong on Borders, tough on Crime, and fully supports the Second Amendment and our great law enforcement officers," Trump said in a statement.

"She loves our Military and Veterans -- and her home state of Arkansas. Sarah will be a GREAT Governor, and she has my Complete and Total Endorsement!"

Sanders began considering running for governor before she left the White House in 2019. CNN reported at the time that Sanders, in multiple private conversations, had floated the idea and told colleagues and friends that she believes running for office would be a good next move for her.

Sanders' run and expected primary challenge could represent a good test of Trump's continued hold on the Republican Party. Not only is Sanders well-liked by the President -- unlike many in Trump's orbit, she left the White House on good terms and in the President's good graces -- but the primary experience she is expected to tout on the campaign trail is her work with Trump.

"She is a very special person with extraordinary talents, who has done an incredible job," Trump tweeted when Sanders was leaving the White House. "I hope she decides to run for Governor of Arkansas—she would be fantastic."