Satellite images show Phoenix and Talent, Oregon, have been nearly wiped out by wildfire 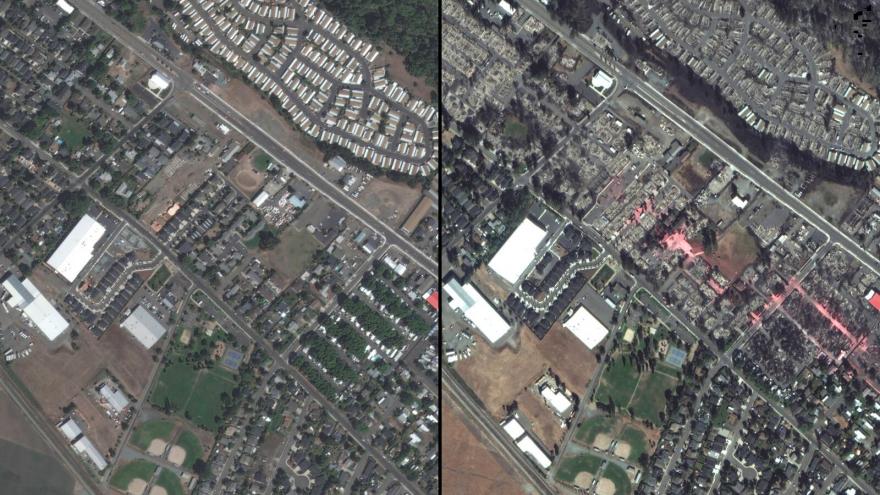 A massive burn scar cuts through parts of Talent and Phoenix, home to about 11,000 people combined. The wounded terrain, seen in images from Maxar Technologies, abuts Interstate 5.

(CNN) -- Swaths of the small southern Oregon cities of Phoenix and Talent now lie in ash, satellite images show, as wildfires wage unprecedented destruction across the US West.

A massive burn scar cuts through parts of Talent and Phoenix, home to about 11,000 people combined. The wounded terrain, seen in images from Maxar Technologies, abuts Interstate 5.

Two people were killed and four injured in the blaze, the State of Oregon Fires and Hotspots Dashboard indicates.

Some 600 residences and 100 other structures were destroyed, it notes.

"This could be the greatest loss of human lives and property due to wildfire in our state's history," Oregon Gov. Kate Brown said Wednesday of the wildfires burning across her state.

Phoenix and Talent are "substantially destroyed," she said.

Nearly everything north of the I-5 overpass in Phoenix appears to have been scorched.

The wildfire looks to have slithered between the interstate and state Highway 99, with mobile home parks taking the brunt of the inferno.

Zooming in just north of Phoenix Road, everything except a few businesses appears to be charred.

Mobile home parks on either side of Highway 99 seem to have sustained significant damage from the wildfire.

In Talent, just four miles south, another mobile home park along Highway 99 appears to be damaged.

First responders, city employees and others in Talent worked through Tuesday and overnight to evacuate people and protect property.

The fire was not at all contained by midday Thursday and had burned over 5,700 acres, the state dashboard showed.