Saturn is losing its rings quicker than expected, NASA warns 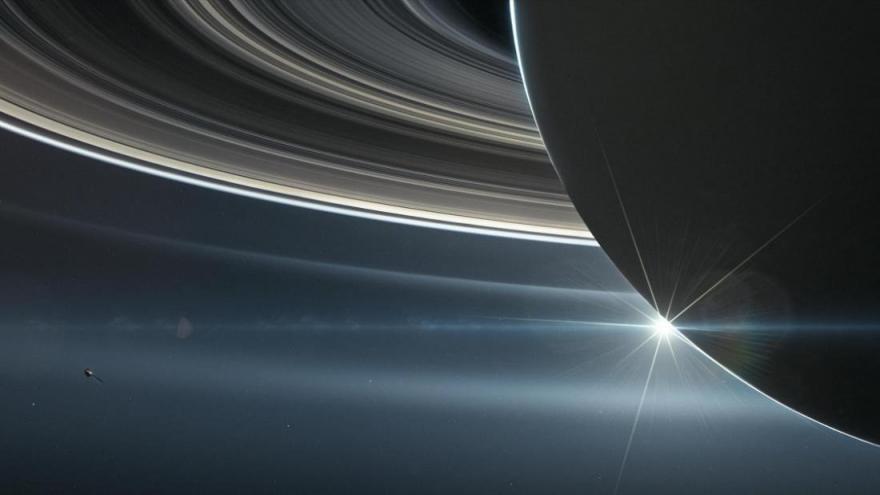 (CNN) -- Saturn's rings make it one of the most striking planets in the solar system, but scientists believe they could disappear in less than a 100 million years -- which isn't all that long when you consider that the gas giant itself is more than 4 billion years old.

New research from NASA shows that the rings, made predominantly of water ice, are being pulled apart by the planet's gravity and onto Saturn's surface as deluges of "ring rain."

"We estimate that this 'ring rain' drains an amount of water products that could fill an Olympic-sized swimming pool from Saturn's rings in half an hour," NASA's James O'Donoghue, lead author of the study, said in a statement.

"From this alone, the entire ring system will be gone in 300 million years, but add to this the Cassini-spacecraft measured ring-material detected falling into Saturn's equator, and the rings have less than 100 million years to live," he added.

'Middle of its lifetime'

The rings are mostly composed of lumps of water ice that vary in size from microscopic grains to boulders of several yards across, the space agency said.

Their origins have long been debated among scientists. Some suggest it was formed around 4 billion years ago -- at the same time as the planet and the rest of the solar system -- but others suggest they surrounded the planet many years after the solar system's birth.

What this study indicates is the rings were formed around the planet less than 100 million years ago. "We are lucky to be around to see Saturn's ring system, which appears to be in the middle of its lifetime," O'Donoghue said.

"However, if rings are temporary, perhaps we just missed out on seeing giant ring systems of Jupiter, Uranus and Neptune, which have only thin ringlets today!"

This comes months after research released in October -- which used data from the Cassini spacecraft recorded before it plunged into the planet's atmosphere in 2017 after 20 years of observation-- found that "ring rain" was like a "downpour."

During the final plunge, Cassini's Ion and Neutral Mass Spectrometer acted as the "nose" of the spacecraft, directly sampling the composition and structure of the atmosphere.

According to the spectrometer team, Cassini's nose hit the "jackpot" as it sniffed out the unknown region between the planet and its closest rings. This is key because Saturn's upper atmosphere extends almost to the rings.

Researchers determined that complex organic compounds are raining a chemical cocktail of dust grains from the closest ring, D ring, into the upper atmosphere. The spectrometer revealed the rings to be composed of water, methane, ammonia, carbon monoxide, molecular nitrogen and carbon dioxide.

"While [the spectrometer] was designed to investigate gases, we were able to measure the ring particles because they hit the spacecraft at such high velocities they vaporized," said Hunter Waite, principal investigator for the spectrometer on Cassini's nose and lead author of the study published in the journal Science.

"Water ice, along with the newly discovered organic compounds, is falling out of the rings way faster than anyone thought -- as much as 10,000 kilograms of material per second," he added.

"We know that it's bumping material out of the rings at least 10 times faster than we thought," said Thomas Cravens, co-author of one of the October studies and a University of Kansas professor of physics and astronomy. "If it's not being replenished, the rings aren't going to last -- you've got a hole in your bucket. Jupiter probably had a ring that evolved into the current wispy ring, and it could be for similar reasons. Rings do come and go. At some point they gradually drain away unless somehow they're getting new material."

Saturn is about 900 million miles from the sun, which is nearly 10 times as far as our own distance from the star. While a day on Saturn takes only about 10.7 hours, a year lasts the equivalent of 29 on Earth. And this gas giant has a volume that's a hulking 700 times that of our own planet.

Saturn's current alignment is in a straight line with the sun and Earth (with Earth in the middle), which affords us a great view of the planet and even some of its moons. Using a telescope, you can see even more moons and Saturn's rings tilted at 26 degrees.