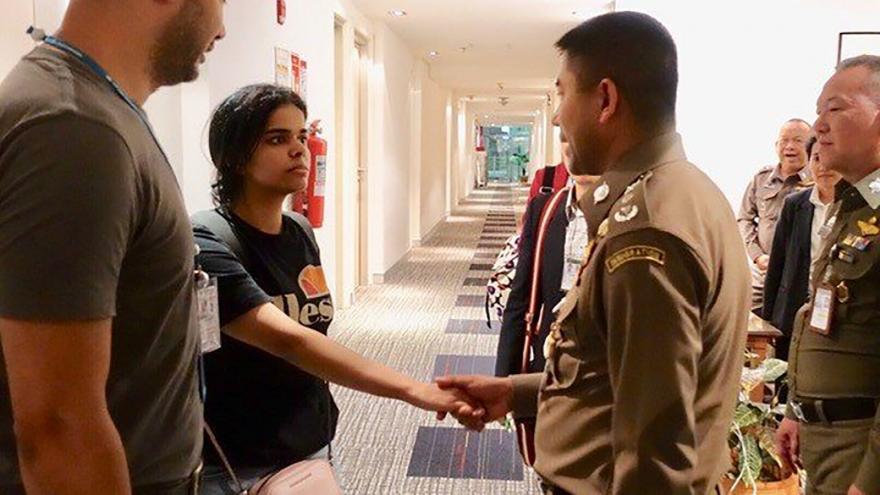 Rahaf Al-Qunun will head to Toronto, with a stopover in Seoul, said Thailand's Immigration Police Chief Surachate Hakparn. She boarded a Korean Airlines plane in Bangkok.

Trudeau told reporters in Saskatchewan that his nation accepted the request made by United Nations officials.

The news followed confusion earlier in the day over where the teenager would be resettled.

Hakparn initially told CNN that Qunun had been offered asylum by both Australia and Canada. But he later requested that the statement be retracted.

Adding to the sense of uncertainty surrounding the case, the Twitter account used by Qunun throughout her appeal for asylum was deactivated.

ABC reporter Sophie McNeill tweeted Friday that Qunun was "safe and fine" but had been "receiving a lot of death threats. She will be back on Twitter but for now she's apparently having a short break."

Qunun had flown to Thailand from Kuwait to escape her family, saying she feared they would kill her because she renounced Islam. She had intended to fly on to Australia, but barricaded herself in a hotel room in Bangkok's main airport on Sunday after Thai immigration officials attempted to deport her back to the Middle East.

Qunun and her supporters drew global attention to her case through a social media campaign launched mostly on Twitter. She documented her arrival and subsequent detention in Bangkok on her smartphone, creating new Twitter and Periscope accounts where she received a deluge of supportive messages.

Her story has also put Saudi Arabia's guardianship laws, which restrict many aspects of women's lives, back under international scrutiny.

In response to the media campaign, Thai authorities allowed Qunun access to the UNHCR and did not deport her to Kuwait. Her online campaign was so successful that Saudi chargé d'affaires Abdalelah Mohammed A. al-Shuaibi told Thai officials through a translator: "We wish they had confiscated her phone instead of her passport."

Qunun later tweeted the video of that meeting and wrote that her "Twitter account has changed the game against what he wished for me."

Resettlement not an option for many refugees

It is not an automatic right for refugees to be resettled and fewer than 1% of registered refugees globally were resettled in 2017, according to the UNHCR.

Refugees can wait their whole lives for a third country to accept them. The process is often assessed on the urgency of a refugee's individual needs, with the most vulnerable prioritized. Refugees can wait from nine months to several years to hear an answer -- longer if they appeal a refusal.

On Wednesday, Australia's Department of Home Affairs had told CNN it would consider Qunun's "referral in the usual way, as it does with all UNHCR referrals." Home Affairs Minister Peter Dutton also said there would be no "special treatment" in the case, according to CNN affiliate Nine News.

"Nobody wants to see a young girl in distress and she has obviously now found a safe haven in Thailand," Dutton told reporters in Brisbane.

"We are in close contact with partners about her situation," Maron said. "Canada will always stand up for human rights, very much including women's rights."