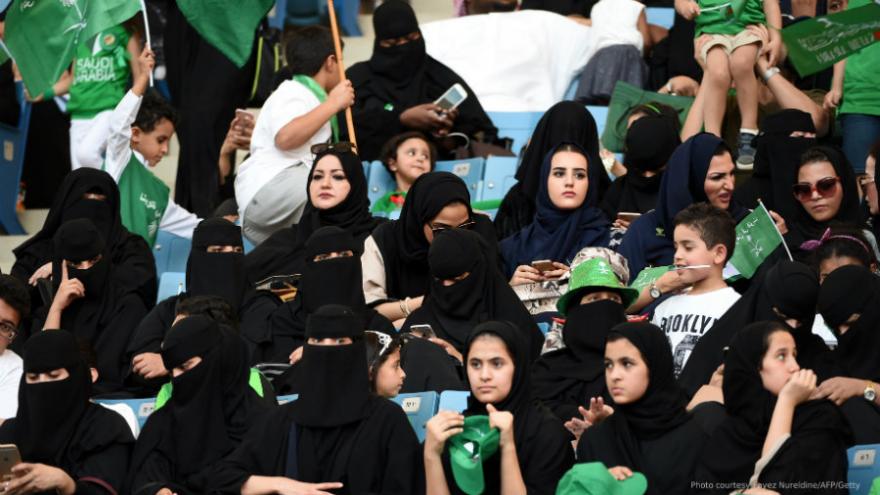 (CNN) -- Not many women in Saudi Arabia have day similar to that of Manal Ghazwan and her two colleagues.

Ghazwan, 30, who has a master's degree in food safety management, is the manager of a Starbucks branch located in the Riyadh head office of Alshaya Company, which operates the franchise of the American brand in the Middle East.

"Both the girls in my team have bachelor's degrees, but they were drawn to the challenge and opportunity that working for a multinational company like Starbucks offers," Ghazwan says.

They are among the trendsetting Saudis moving away from lucrative government jobs to compete for posts in the private sector, and challenging gender roles along the way.

For years labor laws in Saudi Arabia prevented gender mixing in the workplace. But Ghazwan and her team are unique, in that they serve a clientele of both men and women.

"Lately, there has been an implicit and unofficial acceptance of gender mixing in the work environment here," says Bader Aljalajel, who opened his coffee shop, 12 Cups, in one of Riyadh's new glitzy boulevards in 2016.

The shop is manned by five male Saudi baristas and some expats. Aljalajel now plans to open a second shop, this time staffed by female baristas.

"Women who sent us their applications know that they will deal with men at work," says Aljalajel. "Those who have an issue with that will become the black sheep."

The laws have been trending in this direction for years. In 2011, a law was passed that all shops selling women-related products, such as lingerie, should only have female sales representatives. In 2016, drug stores and optics shops could request permits to hire Saudi women, too, so long as the female staff remained separate from male workers and customers.

The Saudi Vision 2030 strategy, set by Saudi Crown Prince Mohammed Bin Salman, aims to increase female participation in the workforce from 22% now to 30% in all sectors in 2030.

"There are now 600,000 Saudi women working for the private sector, 30,000 of whom joined the market last September and October," says Khaled Abalkhail, a spokesman for the Ministry of Labor and Social Development. "This figure stood at 90,000 Saudi women only back in 2011."

It is not just Saudi women who are joining the private sector workplace -- men are, too.

With the unemployment rate in the kingdom at 12.8%, according to official government figures, the Crown Prince in 2016 unveiled an ambitious set of reforms that includes creating private sector jobs for thousands of Saudis with the goal of lowering the jobless rate to 7% by the year 2030.

"When I joined university around 10 years ago, I asked my father for permission to get a part-time job as a barista for $530 per month," says Aljalajel. "He felt it was socially embarrassing to have his son serving coffee, and offered instead to pay me the same amount of money as a monthly allowance in return (for me) focusing on my studies."

The resistance wasn't just on the part of potential employees' families. For a long time, Saudi nationals were not an attractive option to employers who could hire expats often willing to work six days a week for a fraction of the salary that a Saudi employee requests.

For example, a Saudi working as a full-time barista at 12 Cups makes about $1,600 per month, says Aljalajel. A full-time expat barista at the same shop takes home $533 per month.

The average monthly wage per Saudi stands at $2,670, according to Saudi's General Authority for Statistics.

In 2017, in an attempt to deter companies from hiring expats, the government imposed a monthly tax on each non-Saudi employee. Companies now pay as much as $107 for each foreign employee, with that levy set to rise each year.

While more Saudi women are entering the private sector, the challenge is persuading them to stay there.

"From our experience, four out of 10 women leave the jobs that we secure for them a few months after joining because their families' asked them to," says Redwan Aljelwah, who in 2016 founded Riyadh-based recruitment consultancy, Mada, which operates in the retail, F&B, and IT sectors.

Furthermore, Aljelwah says that demand for female employees remains much lower than for males. The unemployment rate for Saudi women in the third quarter of 2016, the most recent figures available, was 34.5%

"All sectors are open to Saudi women, provided that they secure them a safe working environment," says Abalkhail. He added that the Ministry of Labor and Social Development runs courses to teach Saudi women soft and hard professional skills to help them find jobs.

"When women work, they are no longer looked upon as burdens that their families have to bear until they get married." adds Aljalajel, "They have the option to become independent."

Ghazwan and her team of baristas agree.

"Many of the women and men that we serve coffee come to us and say: 'We are proud of what you are doing.'"