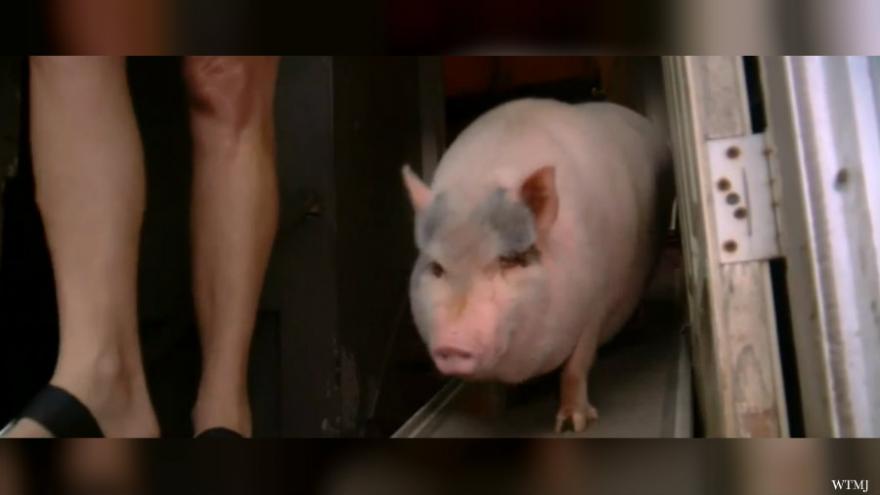 ELKHART LAKE, Wisc. (WTMJ) -- The battle over “Strawberry the Pig” is on in Elkhart Lake.

The 120-pound pot belly emotional support animal was rescued by Christi Sadiq last year and kept at her home as a pet. But recently the village has said Strawberry has to go, and now Sadiq is putting up a fight.

Sadiq applied for “alternative Pet” status for Strawberry earlier this summer, gathering signatures of support from neighbors and having the pig checked out by a vet.

During the process on a scheduled trip to the doctor’s office, Sadiq’s doctor noticed the anxiety and stress that was being caused by the battle to keep Strawberry.

“For the first time in her career she wrote her up as an emotional support animal because she believed that she truly was one,” said Sadiq.

With some opposition from residents at a board meeting and a vote, the request for Strawberry to remain a pet was denied. Sadiq was told she had to keep Strawberry on her property and take the animal out of the village when she traveled to Florida in late September.

Sadiq says “they wanted to keep her hidden away from the community, but like any other animal, like a dog, she needs walking and exercise.”

So that’s what happened recently and Strawberry was spotted and later became an item on the Village Board’s Tuesday night meeting agenda.

Village President Alan Rudnik said “there have been multiple reports of Strawberry roaming the village” and read into record the agreement to have the pig stay at home and leave Elkhart Lake by Sept. 26. A 4 to 1 vote upheld the agreement.

Levy says he hopes to come to a resolution with the village attorney before any type of legal action may be taken.