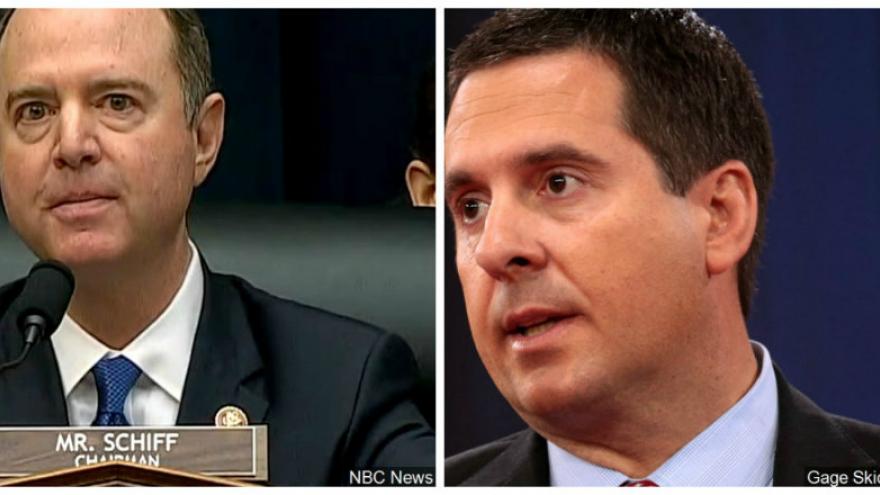 (CNN) -- House Intelligence Committee Chairman Adam Schiff and the panel's top Republican, Rep. Devin Nunes, have both made requests to the FBI and Justice Department to be briefed on the counterintelligence information gathered in special counsel Robert Mueller's investigation.

And now they are warning a subpoena is coming soon if they don't get compliance.

The subpoena threat from Schiff and Nunes -- two California lawmakers who have often been at each other's throats on the committee over the past two years -- is a rare case where the diverging interests of the pair align when it comes to the special counsel's investigation.

Schiff and Nunes have jointly requested a briefing on the FBI's counterintelligence investigation into Trump and Russia from Mueller and his team, as well as the special counsel's evidence collected during the probe.

The request could lead to Mueller testifying before the panel behind closed doors, in addition to the House Judiciary Committee's efforts to seek Mueller's public testimony later this month.

A House Intelligence Committee aide told CNN that the Justice Department has not yet produced any documents in response to the request, and has also not agreed to schedule any testimony. As a result, Schiff and Nunes wrote a letter to Justice Department leaders stating they're prepared to begin the subpoena process soon to obtain the materials they're seeking, the aide said.

Nunes, on the other hand, has an entirely different aim. He launched an investigation in the last Congress into the origins of the FBI's counterintelligence investigation, arguing that it was a politically motivated effort against Trump that led to violations of foreign surveillance laws.

Nunes has said in Fox News interviews that he's not concerned about what's in the Mueller report, but he's seeking the information to find out what FBI and Justice Department officials were up to in the early days of the counterintelligence investigation.

The House Intelligence Committee's Republican-led Russia investigation ended last year, concluding there was no evidence of collusion amid an intense partisan fight over the probe. Schiff has picked up the investigation as chairman with a focus on Trump's finances, following Democrats' retaking of the House majority.

"I don't think so," Burr said when asked if he needed to talk to anyone on the special counsel's team. "The House didn't do an investigation. It doesn't surprise me they're interested in looking at somebody else's work product."