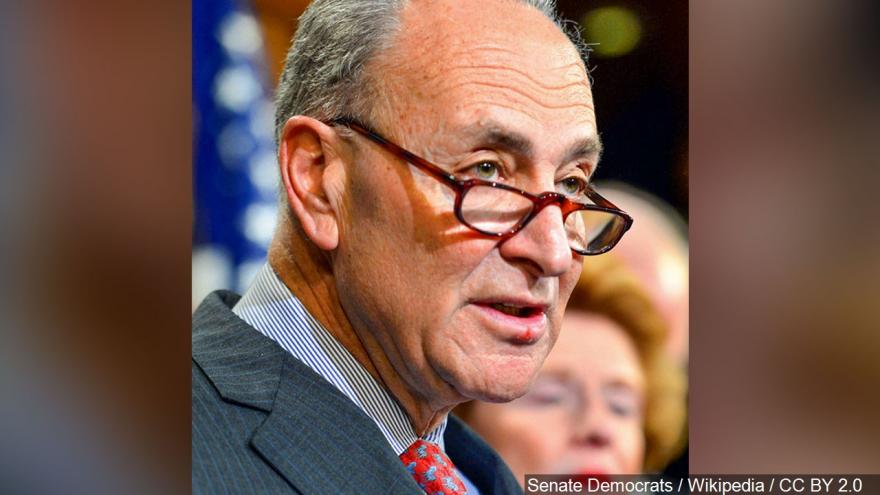 (CNN) -- Senate Minority Leader Chuck Schumer on Monday ramped up his push for the Senate to pursue witnesses and documents in the impeachment trial of President Donald Trump after newly released emails raised questions about how aid to Ukraine was formally frozen on the same day of Trump's July call with the Eastern European country's leader.

Schumer sent a letter to all senators on Monday detailing specific documents he wants produced for the Senate trial, where Schumer and Democrats are pushing for witnesses that Senate Majority Leader Mitch McConnell has resisted in the early negotiations over the parameters of the trial.

Schumer cited the new emails from White House budget official Michael Duffey, which a judge ordered released to the Center for Public Integrity following a Freedom of Information Act request. In an email sent roughly 90 minutes after Trump's July 25 call with Ukrainian President Volodymyr Zelensky, Duffey told the Pentagon not to disburse the security assistance to Ukraine and to keep the information "closely held" due to the "sensitive nature" of the directive.

An OMB spokeswoman said that tying the freeze in aid to Trump's July call was "reckless," noting that the Pentagon and other agencies had already been notified the aid would be held a week earlier.

In his letter, Schumer noted that the House heard from an extensive group of witnesses in the impeachment inquiry, but investigators could not get access to most documents they sought because the administration defied congressional subpoenas.

"Relevant documentary evidence currently in the possession of the Administration will augment the existing evidentiary record and will allow Senators to reach judgments informed by all of the available facts," Schumer wrote. "To oppose the admission of this evidence would be to turn a willfully blind eye to the facts, and would clearly be at odds with the obligation of Senators to 'do impartial justice' according to the oath we will all take in the impeachment trial."

McConnell and Schumer spoke last week about the parameters of the trial, which could begin in January after the House impeached Trump for abuse of power and obstruction of Congress.

But the Senate leaders have yet to reach any agreement on the rules of the trial, and House Speaker Nancy Pelosi has not sent the Senate the impeachment articles necessary to begin the trial.

McConnell has argued that it's too soon for the Senate to consider calling witnesses, saying they should pass a resolution similar to the one unanimously passed to establish the parameters for President Bill Clinton's impeachment trial, which did not address the question of witnesses.

"What we need to do is to listen to the arguments, have a written questioning period and then decide whether we need witnesses or not," McConnell said in an interview on Fox News Monday.

"We haven't ruled out witnesses," McConnell added. "We've said let's handle this case just like we did with President Clinton. Fair is fair."

At a press conference in New York on Monday, Schumer reiterated his demand to reach a deal on documents and witnesses before the trial begins. Schumer also warned that "at the very minimum," Democrats would "require votes" from all of the senators on each of the witnesses and set of documents they're demanding.

"I don't think any of our colleagues will vote to withhold evidence in such an important trial," he said.

McConnell said that the Senate "can't do anything" until Pelosi formally sends the articles of impeachment, though he added he expects her to transmit them "sooner or later."

Pelosi tweeted Monday that the House "cannot choose our impeachment managers until we know what sort of trial the Senate will conduct."

Before Congress left Washington for the holidays, McConnell said that he and Schumer were at an "impasse" over the rules of the trial. The Senate will return in January and could quickly start the trial then -- if Pelosi sends the articles and they reach an agreement.

In his letter Monday, Schumer said the Senate should be given documents for the trial related to three categories: the effort to pressure Ukraine to announce investigations, the withholding of a White House meeting between Trump and Zelensky and the decision to hold and then eventually release the $400 million in US security aid to Ukraine.

Schumer pointed to the release of the Duffey emails, which were partially redacted, as reason for the Senate to get the full documentary record for the trial.

"The December 21 release of partially-redacted versions of these communications in response to the FOIA lawsuit further underscores why the Senate must review all of these records in unredacted form," he said.