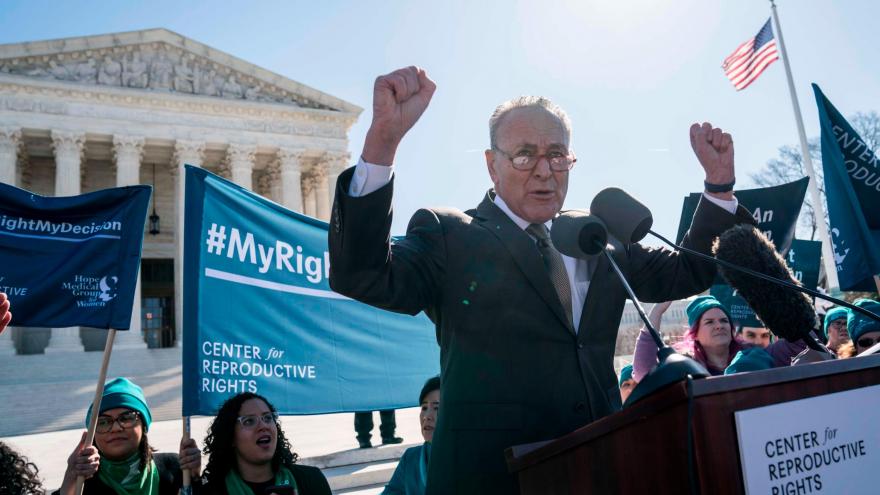 (CNN) -- Senate Minority Leader Chuck Schumer on Thursday said he used the wrong words in his comments about Justices Brett Kavanaugh and Neil Gorsuch outside the Supreme Court on Wednesday, saying they were not a threat.

Schumer's remarks on the Senate floor came after a slew of condemnations coming from Republicans -- including some who want to censure the New York Democrat -- and a rebuke from the high court's chief justice.

"Now, I should not have used the words I used yesterday. They didn't come out the way I intended to," Schumer said Thursday morning. "My point was that there would be political consequences, political consequences for President (Donald) Trump and Senate Republicans if the Supreme Court, with the newly confirmed justices, stripped away a woman's right to choose."

Schumer did not appear to directly apologize, and instead accused Republicans of "gross distortion" and "manufacturing outrage."

"Of course I didn't intend to suggest anything other than political and public opinion consequences for the Supreme Court, and it is a gross distortion to imply otherwise. I'm from Brooklyn. We speak in strong language. I shouldn't have used the words I did, but in no way was I making a threat. I never, never would do such a thing. And Leader McConnell knows that. And Republicans who are busy manufacturing outrage over these comments know that, too."

Speaking at a rally of abortion rights supporters on Wednesday, Schumer appeared to threaten Kavanaugh and Gorsuch, the President's two Supreme Court nominees who were confirmed after bruising nomination fights.

"I want to tell you Gorsuch. I want to tell you Kavanaugh. You have released the whirlwind and you will pay the price. You won't know what hit you if you go forward with these awful decisions," Schumer said, turning to look at the Supreme Court building.

Schumer went on to say Wednesday, "The bottom line is very simple: we will stand with the American people. We will stand with American women. We will tell President Trump and Senate Republicans who have stacked the court with right-wing ideologues, that you're going to be gone in November and you will never be able to do what you're trying to do now, ever, ever again. You hear that over there on the far-right? You're gone in November."

His comments drew criticism from many Republicans in Congress, but they follow years of attacks on the political independence of the US Judiciary Branch from President Donald Trump. The President has repeatedly criticized judges and their decisions, including since before he's been in office.

"This morning, Senator Schumer spoke at a rally in front of the Supreme Court while a case was being argued inside. Senator Schumer referred to two Members of the Court by name and said he wanted to tell them that 'You have released the whirlwind, and you will pay the price," Roberts said.

He continued, "You will not know what hit you if you go forward with these awful decisions.' Justices know that criticism comes with the territory, but threatening statements of this sort from the highest levels of government are not only inappropriate, they are dangerous. All Members of the Court will continue to do their job, without fear or favor, from whatever quarter."

"As long as this majority holds the gavel, we will never let the minority leader's dangerous views become policy. This majority will ensure the only casualties of this recklessness are the reputations of those who engage in it," McConnell said.

Missouri Sen. Josh Hawley introduced a resolution Thursday, cosponsored by 14 Republican senators, to censure Schumer over his comments. Hawley told reporters earlier in the day he had planned to do so although the minority leader said he misspoke.

"The Democratic leader should know better and ... the bottom line is Schumer does know better," he said. "He knew exactly what he was doing. This is a piece of political theater, political vaudeville, really it was pathetic. And he should be censured for it. I mean, this should not be allowed."

Sen. Chuck Grassley on Thursday called for Schumer to apologize to the Kavanaugh and Gorsuch.

"At best, it was an injection of partisan politics into a process that should be immune to them. At worst, it was a threat targeting two sitting members of the Supreme Court," the Iowa Republican said on the Senate floor.

Asked if he believed Schumer when he said the comments were not intended to be a threat, Senate Majority Whip John Thune told reporters, "you always want to think the best of people."

"The remarks he made this morning, at least on some level, acknowledged that he wrongly spoke," he said after Schumer addressed the Senate. "I think our members are going to continue to point out that this is what you get with a Democratic majority. They're going to want to reshape the court."

The South Dakota Republican also said he understands Schumer may have gotten swept up in the moment at the event at the Supreme Court.

"At these political rallies there's a lot of energy going and sometimes people say things in a way that they probably wish they wouldn't have later," he said. "It seems to me he sort of acknowledged that and I hope that he'll be more thoughtful going forward."

Sen. Lindsey Graham, a close ally of Trump, said he opposes censuring Schumer. He explained that his position on the issue is, in part, because Schumer walked back his remarks, but also because it could lead to Democrats attacking Trump.

"I don't want to over dwell on this. He ran hot. We all can do that," the South Carolina Republican said Thursday afternoon.