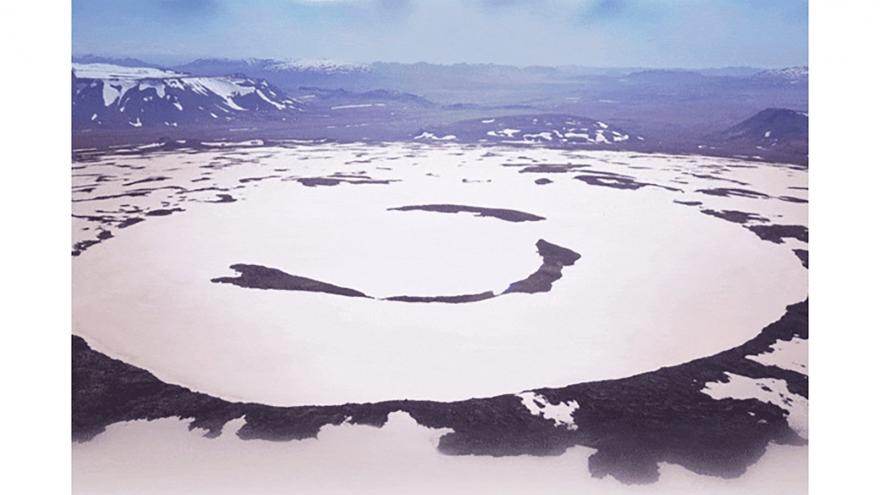 The monument to Okjökull glacier in Borgarfjörður, Iceland, will be installed on August 18 in a public ceremony. Source: Dominic Boyer/Cymene Howe
By Allen Kim and Isabelle Gerretsen, CNN

(CNN) -- The demise of Okjökull, the first Icelandic glacier lost to climate change, will be memorialized with a plaque by researchers from Rice University in Houston.

Yes, we are memorializing glaciers now, and no, this is not a joke.

The monument to Okjökull glacier in Borgarfjörður, Iceland, will be installed on August 18 in a public ceremony.

"This will be the first monument to a glacier lost to climate change anywhere in the world," Rice University anthropologist Cymene Howe said. "By marking Ok's [short for Okjökull] passing, we hope to draw attention to what is being lost as Earth's glaciers expire.

"These bodies of ice are the largest freshwater reserves on the planet and frozen within them are histories of the atmosphere. They are also often important cultural forms that are full of significance."

As ridiculous as it may sound to give a plaque to a former mass of ice, it is a serious matter. Okjökull will certainly not be the last glacier to be lost to climate change, as scientists believe that the 400-plus glaciers in Iceland will all be gone by 2200.

"Currently, Iceland loses 11 billion tons of ice mass every year. All of Iceland's 400+ glaciers are now facing Ok's fate," said Dominic Boyer, a professor of anthropology at Rice University who's been studying the impact of glacial loss on Icelandic communities.

Boyer told CNN that glaciologists predict that "all of Iceland's glacial mass will disappear in the next 200 years, with a massive impact to cultural heritage, tourism, hydroelectric power and fisheries."

It's the latest warning that rising temperatures present a serious threat to glaciers and the millions of people worldwide who live near them.

Last month, a study warned that Himalayan glaciers are melting at a dramatic rate -- losing almost half a meter of ice each year since the start of this century due to global warming.

A report published in April warned that most glaciers in Central Europe, Western Canada and the United States could vanish by the second half of this century under current ice loss rates.

We know what needs to be done

"Ok is the first Icelandic glacier to lose its status as a glacier. In the next 200 years, all our glaciers are expected to follow the same path. This monument is to acknowledge that we know what is happening and know what needs to be done. Only you know if we did it," the plaque reads, in English and Icelandic.

There is also an inscription with the figure "415 ppm CO2" on the plaque, which references the record-breaking amount of carbon dioxide recorded in the atmosphere earlier this year.

"One of our Icelandic colleagues put it very wisely when he said, 'Memorials are not for the dead; they are for the living,'" Howe said. "With this memorial, we want to underscore that it is up to us, the living, to collectively respond to the rapid loss of glaciers and the ongoing impacts of climate change. For Ok glacier it is already too late; it is now what scientists call 'dead ice.'"