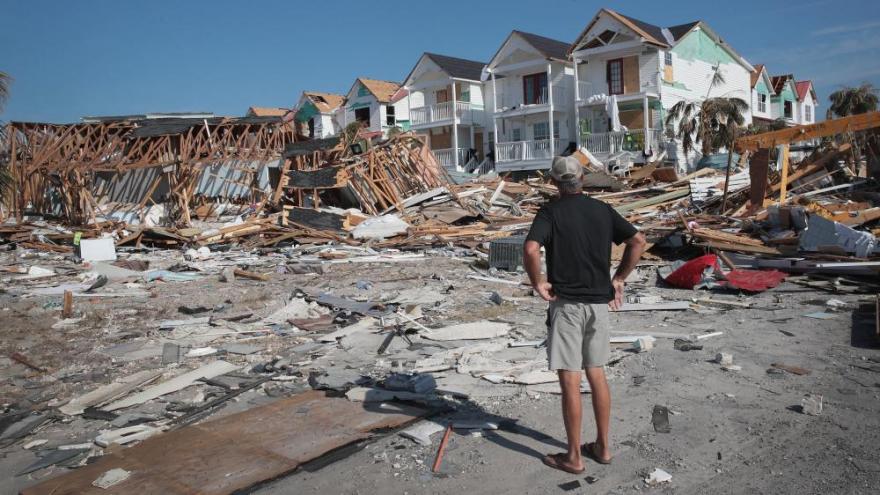 Hurricane Michael, which barreled into the Florida Panhandle in October, has been upgraded to a Category 5 storm, scientists at the National Hurricane Center said Friday.

(CNN) -- Hurricane Michael, which barreled into the Florida Panhandle in October, was actually a Category 5 storm when it hit the coast, scientists at the National Hurricane Center said Friday.

A post analysis report said the storm was stronger than originally thought, with winds at landfall estimated at 160 mph -- making Michael one of only four Category 5 hurricanes to touch down in the US.

The storm was originally designated as a Category 4, with 155 mph winds, when it made landfall on October 10 near Mexico Beach and Tyndall Air Force Base in Florida, the hurricane center said in a statement.

"Category 5 winds were likely experienced over a very small area at and near the coast, and the change in estimated wind speeds is of little practical significance in terms of the impacts associated with the storm," the statement said.

The new estimate of 160 mph winds was made after a review of "available aircraft winds, surface winds, surface pressures, satellite intensity estimates and Doppler radar velocities -- including data and analyses that were not available in real time," the hurricane center said.

Aerial footage after the storm showed massive damage and destruction in coastal cities in the Panhandle, such as Mexico Beach and Panama City Beach.

Michael's deadly trail of devastation stretched from the Florida Panhandle to the Carolinas, where it triggered flash floods that turned roads into rivers.

It was directly responsible for 16 deaths and about $25 billion in damage in the US, according to the hurricane center.

Winds, storm surge and rains directly caused seven deaths in Florida, five in Virginia, three in North Carolina and one in Georgia, according to the hurricane center report.

Additionally, the hurricane was associated with 43 indirect deaths in Florida, the report said. The causes included falls during the post-storm clean up, traffic accidents and medical issues compounded by the hurricane.

In the days after the hurricane, officials in four Southern US states reported at least 32 storm-related deaths.

Winds and storm surge caused "devastating to catastrophic damage" in Bay County, Florida, the report said. More than 45,000 structures were damaged and more than 1,500 destroyed in the county, including severe damage to two hospitals.

The report said $18.4 billion of the estimated $25 billion in damage from Micheal occurred in Florida.

Agricultural and forestry losses represented about $3.3 billion, primarily in Florida and Georgia.

"The federal government has historically provided major disaster funding; we anticipate and expect the same treatment, and we need them to step up and provide some funding and some relief," he said.

The county government estimated storm damages of more than $661 million, the statement said. The estimate doesn't include damages in cities within its boundaries.

The county has already borrowed more than $250 million for storm clean-up vendors as it waits for federal and state reimbursement.

"We've got families doubled and tripled up. There isn't a week that goes by I don't have at least one of my daughters' friends staying at our house. We need some help here."

Michael was the first hurricane to make landfall in the United States as a Category 5 since Hurricane Andrew in 1992.

Michael is the strongest hurricane landfall on record in the Florida Panhandle, and only the second known Category 5 landfall on the northern Gulf coast, according to the hurricane center.