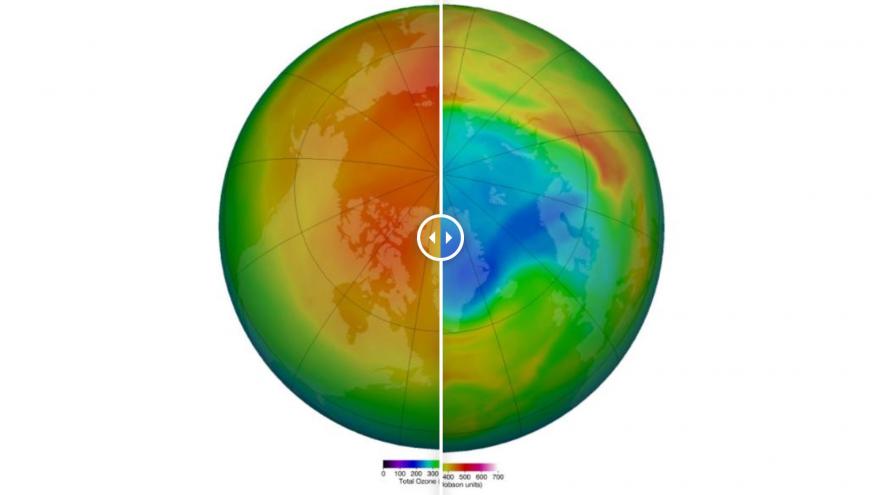 (CNN) -- The Arctic's ozone layer developed a tear, which grew into a hole, and then a bigger hole. Now, it may be biggest hole the North Pole's ozone layer has ever incurred.

This hole in the Arctic ozone layer reached an area of over 620,000 square miles since it was first spotted in February, said Diego Loyola, a scientist at the German Aerospace Center, in a statement to the European Space Agency.

Ozone levels in the area have dropped steeply since then.

Even researchers with the Copernicus Program, the European Union's Earth observation program, who first caught the hole say they aren't sure why it's so large.

"The ozone has been, in this layer, almost completely depleted," said Vincent-Henri Peuch, director of the Copernicus Atmosphere Monitoring Service.

About the ozone layer -- and ozone holes

Life on Earth relies on the ozone layer, which sits in the stratosphere between 9 and 22 miles above the Earth, to protect us from ultraviolet radiation, which is known to cause skin cancer and suppress the immune system. But human-made chemicals have been poking holes in it for years -- there's been a hole in the Antarctic ozone layer every year since 1985, when the first one was reported by the British Antarctic Survey.

There are a few conditions necessary to tear a hole in the ozone layer. Among them are chlorofluorocarbons (CFCs), manufactured chemicals that have been phased out of consumer products after they were banned in 1996, and halons, formerly found in fire extinguishers, which accumulate in the atmosphere after they're emitted during human activity.

These chemicals can remain in the atmosphere between 50 and 100 years. Because of their longevity, the ozone layer isn't expected to fully heal until the end of the 21st century, according to the Environmental Protection Agency.

When the Antarctic is cloaked in below-freezing darkness, polar vortexes can form -- those are swirls of stratospheric clouds that facilitate the reactions between CFCs and the ozone layer (holes typically form when the weather is -108.4 degrees Fahrenheit).

When conditions are right, and the first sunlight after winter arrives, the ozone breaks the CFC bond to release a chlorine atom, which can poke a hole in the ozone layer, according to NASA Ozone Watch.

It's much rarer for ozone holes to form in the Arctic, where the mountainous terrain at high altitudes makes it difficult for polar vortexes to form and sustain their power, Peuch said.

But the existence of this record-breaking hole means that conditions must have been right in the Arctic. Peuch said it's still not clear why this hole formed, though.

What the record-breaking hole means

The level of ozone fell steeply in the affected area throughout February and March, Peuch said.

As a result, the UV radiation that has made it to the Earth's surface is slightly higher than usual. But because the hole occurred in the winter into early spring, the UV index reached a high of 5, which is unusually high for this region but fairly normal for much of the United States, which hovers around an index of 5 or 6, according to the EPA's monthly UV averages.

This hole doesn't pose a huge deal for humans, though, Peuch said. Because the UV radiation is mostly affecting northern Greenland, which he said is sparsely populated, and the exposure won't last long, the effects of this ozone hole are minor.

One area that is of concern, he said, is how this could affect ecosystems in the area.

"That I cannot tell, but for human health, it's fairly moderate," he said.

And the hole isn't permanent, either: Peuch said he expects it to begin to close as soon as next week.