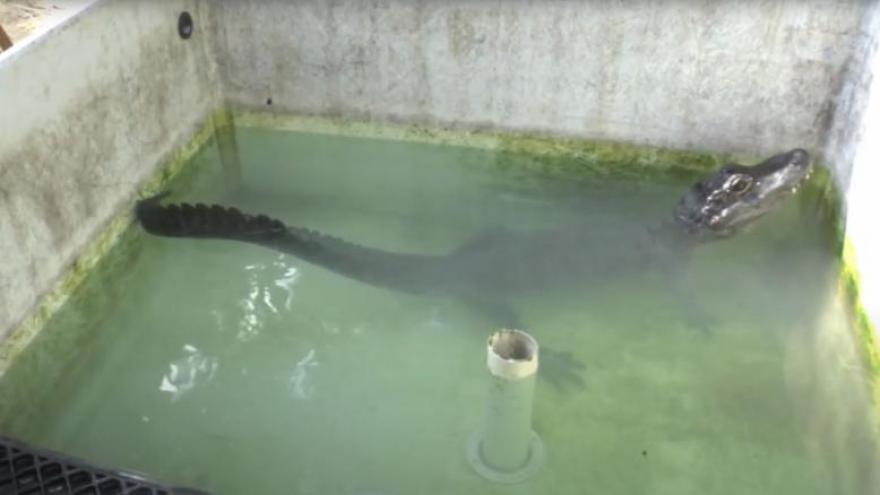 The Chinese alligator is seen in a tank, prior to the helium experiment.

(CNN) -- A team of scientists who put an alligator in a helium-filled box and made it shout have won an Ig Nobel Prize, a prestigious(ish) award that commemorates the science world's more unorthodox experiments.

The group, led by researchers from Austria and Japan, were attempting to find out whether alligators' vocal communications relate to their body size -- but it was their method, rather than their hypothesis, that caught the eye of the awards committee.

Another experiment, which found that narcissists can be identified by their eyebrows, was also honored.

And the ceremony's Peace Prize went to the governments of India and Pakistan, for "having their diplomats surreptitiously ring each other's doorbells in the middle of the night, and then run away before anyone had a chance to answer the door" -- a reference to an incident that reportedly took place two years ago.

The Ig Nobels have been awarded since 1991 to parody the more established Nobel Prizes. This year's ceremony, which took place on Thursday, was webcast as a result of the pandemic.

The award for Economics went to an international team of experts for "trying to quantify the relationship between different countries' national income inequality and the average amount of mouth-to-mouth kissing."

Meanwhile, American researcher Richard Vetter won the entomology prize for "collecting evidence that many entomologists (scientists who study insects) are afraid of spiders, which are not insects."

And a Dutch-Belgian team won the medicine award for "diagnosing a long-unrecognized medical condition: Misophonia, the distress at hearing other people make chewing sounds."

"The Ig Nobel Prizes honor achievements that make people laugh, then think," the award organizers write on their website.

US President Donald Trump, UK Prime Minister Boris Johnson and Brazilian leader Jair Bolsonaro won the "Medical Education Award," along with a handful of other world leaders, for using the pandemic to teach the world that "politicians can have a more immediate effect on life and death than scientists and doctors can" -- a not-so-subtle dig at those politicians' handling of the coronavirus crisis.

Thursday's ceremony marked the 30th edition of the awards, which are usually held at Harvard University.