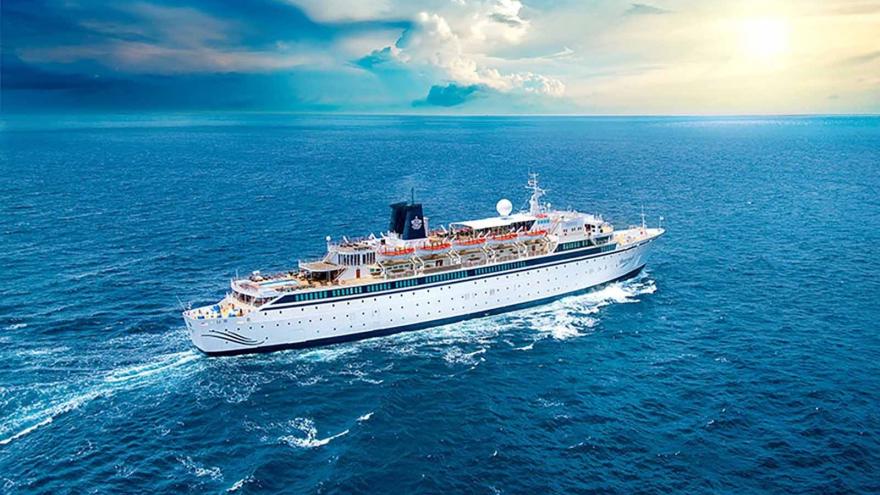 Photo courtesy of the Church of Scientology

(CNN) -- A cruise ship owned by the Church of Scientology that has a female crew member with a case of measles on board has departed from St. Lucia, according to marinetraffic.com.

The chief medical officer of St. Lucia said on Thursday that the ship would likely leave Port Castries where it was moored for its home port that night. The Church of Scientology says on its website the ship's home port is in Curaçao.

The Freewinds, with approximately 300 crew members and passengers, was been quarantined in a port in the Caribbean island's capital since officials discovered the person on board has the highly contagious disease, according to Chief Medical Officer Dr. Merlene Fredericks-James.

On Thursday, the ship's doctor requested 100 doses of the measles vaccine, according to a statement from the St. Lucia Department of Health and Wellness, "and this is currently being provided from our supplies, at no cost."

Crew members and passengers are being monitored by the ship's doctor, the statement said. "Continued surveillance is necessary as the incubation period for measles ranges from 10 to 12 days before symptoms in exposed persons occur," the statement added.

No one on the ship has been allowed to disembark.

Fredericks-James said "given the highly infectious nature of the disease, it is likely that others may have been exposed."

The ship arrived at St. Lucia on Tuesday and was set to depart Thursday, according to a schedule posted on the St. Lucia Air and Sea Ports Authority website.

The Church of Scientology didn't respond to CNN's request for comment. It says on its website the ship is a religious retreat at the pinnacle of a Scientologist's spiritual journey.

Depending on when other passengers were exposed, it may not be too late for them to receive a measles vaccine.

According to Tim Moody, former chairperson of Emerging Public Health Threats and Emergency Response Coalition, someone who was never vaccinated for and then exposed to measles has 72 hours to receive a vaccine. If they have already caught the disease, the vaccine should reduce the severity.

Using quarantines to assist in controlling an outbreak, while uncomfortable, is an important public health option, Rebecca Katz, who directs the Center for Global Health Science and Security at Georgetown University, told CNN.

"Quarantine is a word that people respond to very strongly, but it's actually one of the strongest tools in the public health tool kit," Katz said. "But because it curtails civil liberties, most public health officials are very wary to utilize it."

Every state has laws in place that allow quarantines and other public health enforcement tools, and they differ based on the jurisdiction. For anyone who refuses to cooperate, actions can range from issuing a self-isolation order to "checking in once a day via the internet, to putting a tracking device on somebody, to placing an armed guard outside of their home," Katz said.

Fredericks-James previously said health officials were using authority given to them by the nation's quarantine act and public health act.

Measles is a highly contagious disease caused by a virus that can spread through the air when an infected person coughs or sneezes or if someone comes into direct contact or shares germs by touching the same objects or surfaces. Symptoms may include fever, cough, runny nose, watery eyes and a rash of red spots.

Measles cases in the United States have surpassed the highest number on record since the disease was declared eliminated nationwide in 2000.