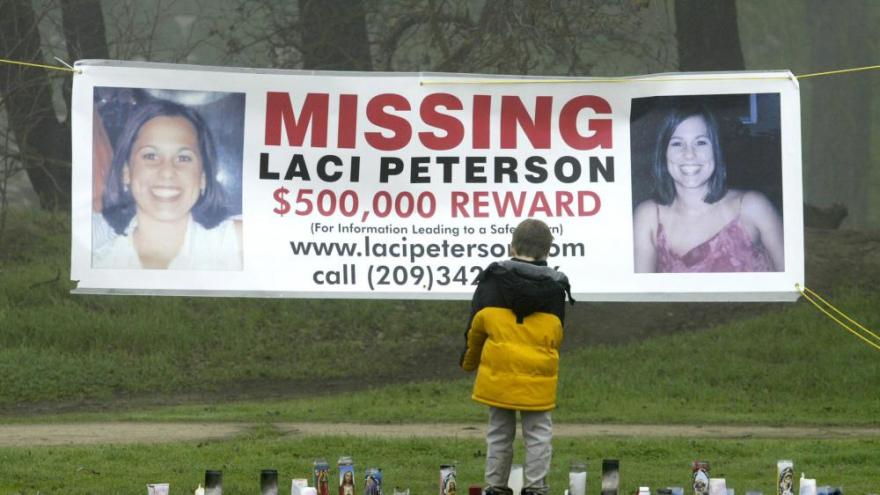 District Attorney Birgit Fladager said she would not seek to reinstate the death penalty after consulting with the victims' family, who said the "process is simply too painful to endure once again."

(CNN) -- Scott Peterson has been resentenced to life in prison without the possibility of parole for the deaths of his wife and unborn child, a California judge ruled Wednesday.

Peterson, 49, was convicted in 2004 for the murders of his wife Laci and their unborn son Conner. Peterson was originally sentenced to death.

In August 2020, the California Supreme Court reversed Peterson's death sentence after finding that potential jurors were dismissed erroneously, in part because they expressed general objections to the death penalty on a questionnaire.

Judge Anne-Christine Massullo on Wednesday ordered Peterson to serve life in prison without the possibility of parole for the first-degree murder of Laci and a concurrent sentence of 15 years to life for the second-degree murder of Conner.

"You didn't want the responsibility of being a father. You're a coward," Laci's mother Sharon Rocha said.

She also spoke of the young man Conner never became.

"He would have been 18 years old by now. Ten months ago, you would have been free of child support and not have to worry about being responsible for a child," Rocha said.

The legal saga leading up to resentencing

Laci Peterson, seven months pregnant with Conner, was reported missing on December 24, 2002. Their bodies washed ashore and were found separately in April 2003.

A jury convicted Scott of their murders, and he was formally sentenced to death in 2005.

Prior to Wednesday, Peterson had been in prison limbo since the California Supreme Court reversed his death sentence in August 2020 for murdering his wife and unborn child.

Stanislaus County District Attorney Birgit Fladager said earlier this year she would not seek to reinstate the death penalty after consulting with the victims' family, who said the "process is simply too painful to endure once again."

"The People submit to the Court that the only sentence available for this defendant is a sentence of life without the possibility of parole plus 15 years to life for the murders of Laci and Conner," Peterson's wife and unborn son, the prosecutor's December 1 filing stated.

The resentencing comes amid yet another legal tangle in Peterson's case: In October 2020, the California Supreme Court ordered a lower court to reexamine his murder convictions because a juror did not disclose involvement in other legal proceedings.

"Juror No. 7 committed prejudicial misconduct by not disclosing her prior involvement with other legal proceedings, including but not limited to being the victim of a crime," the court wrote.

Peterson's lawyers said the juror's answers on her voir dire questionnaire were false, and she committed misconduct, which raised the presumption of prejudice.

Peterson was sentenced to death in 2005 for the 2002 murders of Laci and Conner in what was arguably one of the most publicized trials in recent memory. But in 2020, the state's highest court found prospective jurors were dismissed in error after they expressed general objections to the death penalty on a questionnaire.

"Here, the trial court erroneously dismissed many prospective jurors because of written questionnaire responses expressing opposition to the death penalty, even though the jurors gave no indication that their views would prevent them from following the law — and, indeed, specifically attested in their questionnaire responses that they would have no such difficulty," the court wrote in its 2020 decision.

Prosecutors charged that Scott Peterson killed her at their Modesto home, then dumped her body in the San Francisco Bay from a fishing boat he had recently bought.

Peterson has always maintained his innocence, and his appeals have focused on various aspects of the trial, including the publicity surrounding it, the way the jurors were chosen, evidence admitted and not admitted at trial, and on prosecutorial statements.

A slew of circumstantial evidence convinced the jury of his guilt, including testimony from a woman who said she had been dating Peterson -- who pretended to be single -- and the fact Peterson claimed to be fishing on the San Francisco Bay the day his wife disappeared.

The court on November 23 ordered Peterson to be transported from the San Quentin State Prison to the San Mateo County Jail for the resentencing.

Gov. Gavin Newsom issued a moratorium on the death penalty in 2019. The moratorium is only in effect while Newsom is in office.

California has not executed an inmate since 2006.

Correction: This story has been updated with the correct spelling of San Quentin State Prison.