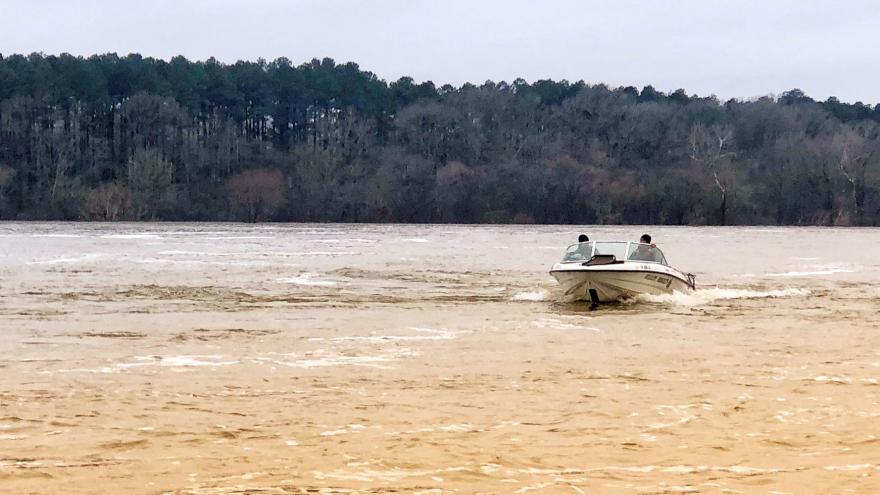 Two 15-year-old boys and a 43-year-old man have been missing since a fishing competition on the Tennessee River in Hardin County. Credit: Tennesee Wildlife Resources Agency/Facebook
By Hollie Silverman, CNN

(CNN) -- Two 15-year-old boys and a 43-year-old man have been missing since a Saturday fishing competition on the Tennessee River in Hardin County.

The group attended a local bass fishing tournament on Saturday but failed to return and were reported missing at 9 p.m. Sunday night, according to a news release from the Tennessee Wildlife Resources Agency.

A search for the missing boaters was suspended Monday night due to hazardous water conditions, the news release said.

The teens are both members of the Obion County Central High School fishing team and the man is the father of one of the students, Tim Watkins, Director of School for the Obion County School District told CNN affiliate WHBQ.

Watkins said the boat they were in was having trouble before the start of the competition and did not leave the dock with the other competitors, WHBQ reported.

Despite the issues, the boat launched and the teens attempted to compete, Watkins told the affiliate.

TWRA spokeswoman Amy Spencer told WHBQ that the search area is vast. "Our crews searched Pickwick Lake last night and they started searching on the Tennessee River side," Spencer said. "The search is very extensive. We have a large area that we are trying to cover."

Because so many people have volunteered to help in the search, the Tennessee Wildlife Resources Agency has limited its volunteers to people from Obion County who are experienced boat operators. They warned that volunteers need to be prepared for swift water conditions and inclement weather.

"We have had a tremendous outpouring of people that want to help, and we understand you are concerned," Spencer told WHBQ. "But due to the current river level and the way the water is moving we are asking volunteers to stand down and leave it to the professionals."

The search will resume at 7:30 a.m. local time Tuesday, the agency said.