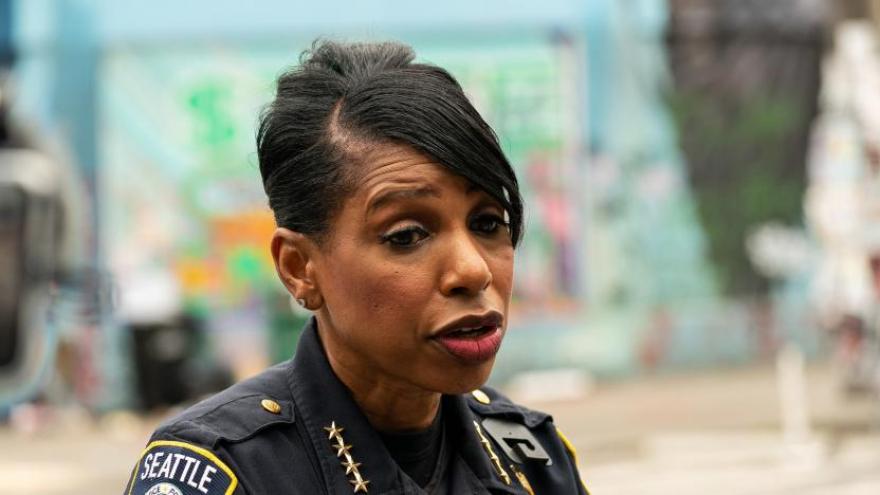 Best's announcement came on the same day the council approved the mid-year budget cut from the police department's 2019-2020 budget of $400 million.

The reduction to the police department budget will equate to $11 million over the course of a year, an amount that is far less than a 50% budget cut that had earlier been discussed.

The city council rebalanced the budget in light of the economic crisis brought on by the Covid-19 pandemic and calls to redistribute funds from policing to community programs in the wake of the protests following the death of George Floyd, Seattle City Council President M. Lorena González said in a statement.

"I want to thank Mayor (Jenny) Durkan for her continuous support through good times and tough times," Best said in a letter to members of the police force obtained by CNN. "I am confident the department will make it through these difficult times."

Durkan said the city is losing an unmatched leader.

"Her grit, grace and integrity have inspired me and made our city better," Durkan said in a statement. "These last months, I knew Chief Best was the person to lead our city through this challenging time, to reimagine policing and community safety."

Visibly emotional at a press conference Tuesday, Durkan said she had asked the chief to stay, calling her resignation a "deep loss for our city."

"My heart is obviously heavy to lose her, and I will freely admit, I wish she was staying," the mayor said.

"Reducing the budget of the Seattle Police Department is a response to the calls for advocating for racial justice and investments in BIPOC communities," González said.

The city's 911 calls involve criminal activity 56% of the time, and González said resources and funds can be better allocated by involving other services.

"What we can do is allow our police to focus on what they are trained to do and fund service providers addressing the more complex issues of housing, substance use disorder, youth violence prevention, affordable healthcare, and more," she said.

The chief stressed on Tuesday that her decision "is not about the money," but about losing part of the team she said she had worked hard to put together.

"It really is about the overarching lack of respect for the officers, the men and women who work so hard, day in and day out," Best said.

The budget still must go to Durkan, who can sign it into law, not sign and allow it to become law or veto it, spokesperson Kelsey Nyland said.

In June, Durkan asked the council to cut about $20 million from the budget of the police department to deal with a city shortfall of $378 million stemming from lower tax revenue and increased demand on services during the Covid-19 pandemic. The proposed cut to the police department was the largest reduction in the mayor's budget proposal.

At the time, Durkan asked the police department to come up with plans to cut up to 50% of its spending in next year's budget.

Durkan said she would not begin a search for a new police chief this year, because with the department being reorganized, "nobody would know what job they are applying for."