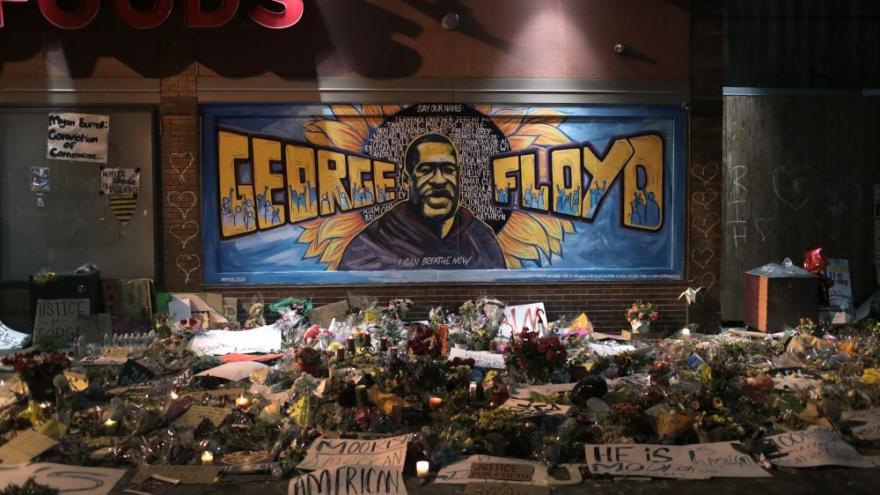 Candles burn at a memorial at the spot where George Floyd was killed, on June 1, 2020 in Minneapolis, Minnesota. A second memorial for Floyd will be held in Hoke County, North Carolina.

(CNN) -- Thousands of protesters are pouring onto the streets of dozens of American cities Saturday as George Floyd's life is celebrated at an intimate memorial service in the state where he was born.

The public viewing and private memorial in North Carolina, more than 1,300 miles from where Floyd's life ended at the hands of Minneapolis police, follows 11 nights of sometimes violent unrest that forced several US cities to take immediate steps against police violence and racial bias.

Mourners lined up to spend a brief moment of silence before Floyd's open casket in a rural church just outside of his birthplace in Fayetteville hours before the private memorial.

From the nation's capital to Los Angeles, a second weekend of demonstrations takes place against the solemn backdrop of a second memorial for the 46-year-old man in Raeford. It will be a tribute "about the life that Mr. George Floyd lived, and this is a time to embrace the family with expressions of love and kindness," Hoke County Sheriff Hubert Peterkin said on Facebook.

"I'm an older mature man," Peterkin told CNN Saturday, adding that he cried at his dinner table when he saw video of Floyd's death for the first time. "I'm not sure if I was 18, 19 years old, I wouldn't be out there" with the protesters. I couldn't control that."

By Saturday afternoon, there were an estimated 6,000 protesters at the Lincoln Memorial and near the White House in the nation's capital, according to a tweet from DC Police Traffic. Protesters were also gathering at other locations, including Capitol Hill.

They carried signs remembering Floyd and other victims of police brutality, with messages such as "Remember their names" and "Silence is violence."

"From a very young age, my parents told me that is what to expect when it comes to racism and how I'm viewed," Roger Campbell II, a Maryland teacher who was among the protesters at the Lincoln Memorial. "So I always just accepted it and never really tried to look at it too much... All those emotions, the anger, the frustration, the hurt -- it just bubbles up."

Outside the Dirksen Senate Office Building in Washington, hundreds of protesters gathered for a march to the National Mall, with a stop in front of the Smithsonian's National Museum of African American History and Culture, then on to the Lincoln Memorial. Freedom Fighters DC, one of the organizing groups, held a voter registration drive.

"I don't care if I lose my life if that means my nieces and my nephews won't have to deal with someone invalidating them because of the color of their skin," said Philomena Wankenge, a board member and founder.

A night of de-escalation for protests

The gatherings and remembrances followed a night of de-escalation for protests in many cities across the US.

Atlanta will not enforce a curfew on Saturday, the first time in a week, according to the office of Mayor Keisha Lance Bottoms.

Curfews for both Denver and Minneapolis expired Friday morning, marking the first time in days that the cities were not under orders to manage protests.

"Every night it got quieter and quieter to the point where we don't see any need for the state to have a curfew. And so there is not going to be any curfew this weekend," Minnesota Commissioner of Public Safety John Harrington said Friday.

In Washington, DC, where protesters have clashed with authorities, a "handful" of National Guard members that were armed earlier were ordered to no longer carry firearms, Secretary of the Army Ryan McCarthy said Friday. That same day, DC Mayor Muriel Bowser wrote a letter to President Donald Trump requesting that federal law enforcement be withdrawn, citing peaceful protests.

In Los Angeles, protesters held hands and handed out voter registration forms, with leaders encouraging the younger generations to exercise the right their ancestors died for.

Local leadership has begun to implement changes in response to Floyd's death and the national protests.

A measure agreed upon Friday by the city of Minneapolis bans police officers from using chokeholds and neck restraints.

The measure also mandates timely discipline decisions of officers, allows for civilian audits of body camera footage, and requires the Minneapolis police chief's authorization for the use of crowd control weapons, including rubber bullets and tear gas, according to the order obtained by CNN.

A judge still needs to approve the measure before it is enacted.

"We are going to dramatically rethink how we approach public safety and emergency response," City Council member Jeremiah Ellison tweeted. "It's really past due."

"We are moving quickly to create substantive change," Walz said in a statement. "I'm grateful to City of Minneapolis leadership for taking these critical steps with us to address the systemic inequities that have persisted for generations in our criminal justice system."

Though it is not clear what changes will come to New York City, Mayor Bill de Blasio promised to respond to the anger he said he felt from the crowd at a memorial for Floyd in Brooklyn Thursday.

A small measure of the changing tone of protests and police response has been the number of in arrests.

In Portland, Oregon, police reported the arrests of 20 adults and a juvenile during downtown demonstrations Friday night that began peacefully but devolved when protesters hurled brick and bottles at officers.

Atlanta, which has made 352 arrests since the protests began, reported no arrests Friday, police said. And in requests for federal police to be removed, DC Mayor Bowser said that the city made no arrests of protesters over Thursday night.

For those who have been arrested in New York City, Manhattan District Attorney Cy Vance announced that his office will decline to prosecute arrests on charges of unlawful assembly and disorderly conduct.

Many cities are now dealing with the fallout of officers' violence against demonstrators in previous days of protests.

An Atlanta officer who was seen on video body slamming a woman on the first night of protests in the city has been placed on administrative assignment, the police department said in a statement Friday.

In another incident from early in the protests, a police officer in Brooklyn was seen pushing a woman to the ground on May 29. The officer was suspended without pay and their supervisor has been transferred, NYPD Commissioner Dermot Shea said Friday.

In Buffalo, New York, two officers were suspended after they allegedly pushed a 75-year-old protester to the ground Thursday. The man is hospitalized in serious condition, authorities said. On Saturday those officers pleaded not guilty to second-degree assault charges and were released on their own recognizance without bail.