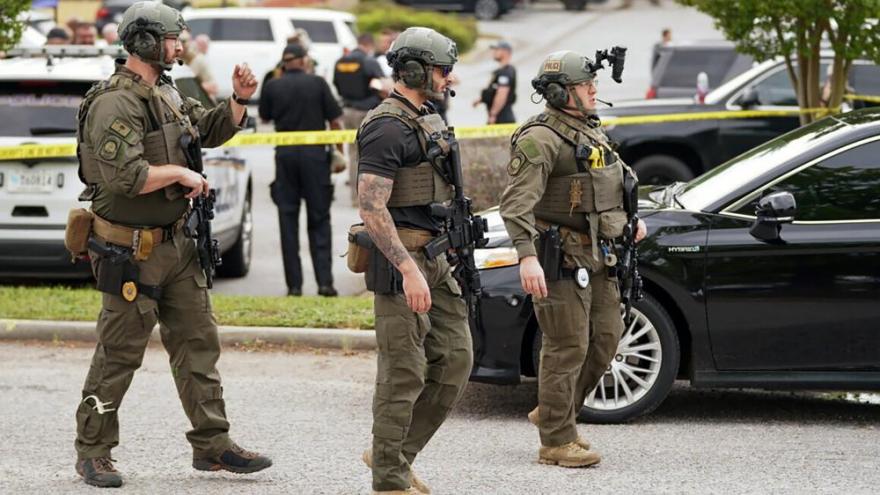 (CNN) -- Police arrested a second suspect and are seeking a third in connection with the mass shooting that took place at Columbiana Centre mall in Columbia, South Carolina, Police Chief W.H. "Skip" Holbrook said at a Monday news conference.

The shooting left 15 people injured in Saturday's shooting. Police had been reporting for the last two days that 14 people were injured, but another victim was reported Sunday during interviews, Holbrook said. The 15th victim was injured while standing beside someone who was hit by gunfire. Police said that nine people suffered gunshot wounds during the shooting and six others suffered other injuries.

Police believe the motive for the shooting is connected to an ongoing dispute between the suspects. Two handguns have been seized that police believe were used in the shooting, Holbrook said.

Jewayne Price, 22, was arrested the day of the shooting and was charged with unlawful carrying of a pistol, police said in a news release. Holbrook said Monday that Price is now facing additional charges of nine counts of aggravated assault and battery of a high and aggravated nature and attempted murder.

An arrest warrant has also been issued for a third suspect, Amari Sincere-Jamal Smith, 21, Holbrook said. Smith is wanted for nine counts of assault and battery of a high and aggravated nature, attempted murder and unlawful carry of a pistol.

Smith should be considered armed and dangerous, Holbrook said.

It is unknown if Robinson or Smith have attorneys. CNN contacted the solicitor's office for the state's 11th judicial circuit but the messages were not returned.

Price's attorney, Todd Rutherford, told CNN affiliate WIS-TV Sunday that his client "did not do anything to bring about the trouble" and was attacked by two people shooting at him at the mall.

"He called the police, turned himself in, turned over the firearm that was used in this and gave a statement to the Columbia Police Department," Rutherford said. "He owns the gun legally, it is registered to him, he bought it legally, he has no prior record, as you heard in court. He does not have a concealed weapons permit."

Rutherford said his client knew the attackers and that the incident did not stem from a verbal argument turned violent. He added the other suspects allegedly threatened his client on Facebook prior to the shooting.

"This was a situation where they just started to shoot at him," Rutherford said. "His thoughts and prayers go out to those who were injured in this incident. It was unprovoked by him."