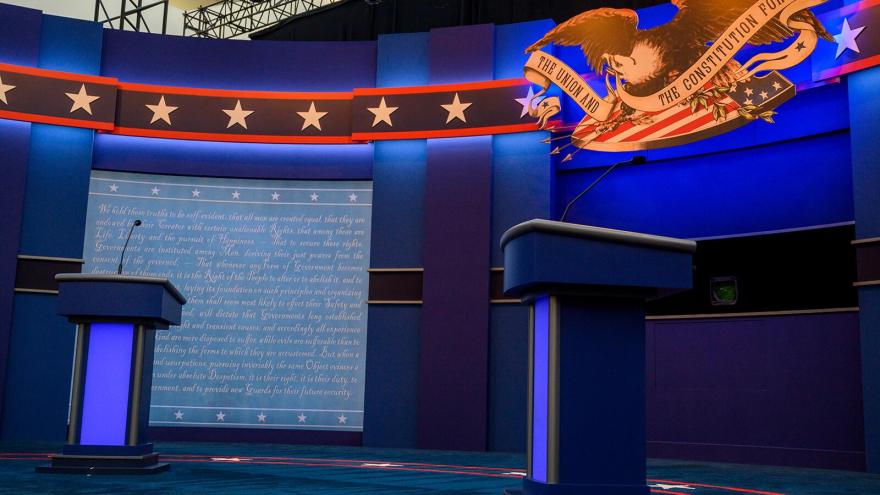 The second presidential debate will be held virtually, the Commission on Presidential Debates announced Thursday morning in the wake of President Donald Trump's positive test for coronavirus.

(CNN) -- Donald Trump's decision to walk away from the next presidential debate because it was set to be held virtually has thrown the future of all debates between the President and Democratic nominee Joe Biden into question, putting even more focus on how Trump's positive coronavirus diagnosis is altering his reelection bid.

After the Commission on Presidential Debates announced that the debate on October 15 would be held virtually due to coronavirus concerns, Trump told Fox Business that he was "not going to waste my time on a virtual debate."

"I am not going to do a virtual debate," said Trump.

The comments roiled an already contentious debate process and set off a back-and-forth between the Biden and Trump campaigns. Biden's spokeswoman swiftly said that they would have agreed to a virtual format for next Thursday's contest, but because the President had seemingly bailed, they urged the commission to make the debate scheduled on October 22 a town hall debate format.

Hours later, Trump campaign manager Bill Stepien said they would be willing to push the October 15 debate back a week and then move the third debate to October 29, just days before the November 3 election.

"Trump's erratic behavior does not allow him to rewrite the calendar, and pick new dates of his choosing. We look forward to participating in the final debate, scheduled for October 22, which already is tied for the latest debate date in 40 years. Donald Trump can show up, or he can decline again. That's his choice," Bedingfield said.

The move by the commission to make the next scheduled debate virtual was seen as needed by members of the debate commission given the uncertainty around the President's health.

Politically, if Trump skips a debate, he'll be deprived of a platform that he needs at a time when his campaign is trailing in every national poll and in a number of key swing states. The first event was watched by more than 73 million people.

Frank Fahrenkopf, head of the debate commission, told CNN that the commission spoke with both campaigns "just before" they announced that the second debate would be held virtually.

"We did not consult with them," he said, adding that their decision is "supported by the Cleveland Clinic," the commission's health advisers.

Biden campaign spokeswoman Bedingfield responded to Trump's refusal to participate by noting Biden would be happy to appear virtually, but said if the President declines to appear, the former vice president will hold a town hall elsewhere.

Bedingfield also asked the commission to push what would have been a town hall style debate -- where actual voters ask questions -- to October 22 so that "the President is not able to evade accountability."

"The voters should have a chance to ask questions of both candidates, directly," she said.

Trump complained during the interview with Fox that a virtual debate would mean he would have to "sit behind a computer" in a virtual debate and the moderator could "cut you off whenever they want." But a virtual debate is not unprecedented -- the third contest between Richard Nixon and John F. Kennedy in 1960 occurred with both candidates in different locations.

Stepien, Trump's campaign manager, accused the commission on Thursday of "unilaterally canceling an in-person debate" to help Biden and said the President will be holding a rally instead of attending the debate.

Fahrenkopf noted that it was fully within the President's right to decline to debate.

The commission met on Wednesday to discuss the change. The group, made up of three co-chairs and 10 board members, voted unanimously to make the change, two members of the commission tell CNN. One member was absent and did not vote.

People close to Biden are elated with the current state of play around debates, feeling that Democrats are in a win-win position whether or not Trump decides to debate next week.

The thinking goes like this: The first debate worked well for Biden, so they are fine with having another. But Trump fuming about a virtual debate because of his own coronavirus diagnosis plays directly into their messaging on his recklessness around the virus and, if the President doesn't backtrack, having no debate deprives the incumbent of a massive TV audience he needs right now.

"Here is Joe Biden's thought process: He wants to do the debates. It was a big win for him in the first debate and any time Joe can stand on stage with Trump, it is good for Joe Biden," said Terry McAuliffe, a former Virginia governor and close Biden ally. "Biden is going to go on, and if Trump doesn't want to go ... We could not be in a better place on these debates."

McAuliffe, who is also a CNN political commentator, said there is a sense that Trump won't stick with his no-debate position and will eventually agree to the virtual format.

"Trump needs debates like he needs oxygen. He needs a Hail Mary. He is down everywhere," McAuliffe said. "Ultimately, I can't see him not doing it. He needs the exposure."

Decision was days in the making

The future of debates between Trump and Biden have been in question ever since the President's positive diagnosis last week. CNN reported on Monday that the commission was considering moving debates to a virtual format.

"The Commission, including me, is certainly open to virtual operations of the debates, without question," said a commission member, who asked for anonymity to speak openly about forthcoming deliberations.

Even before the vice presidential debate, however, members of the commission have been consumed by what to do about the upcoming presidential contests and said that whether the event happened in person or virtually centered on one thing: Trump's well-being.

"It is all going to depend on the President's health," a commission member said before the vice presidential debate. "We have to plan like it is going to happen. ... If he is quarantined in the White House, they have a way to bring him" live to the hall.