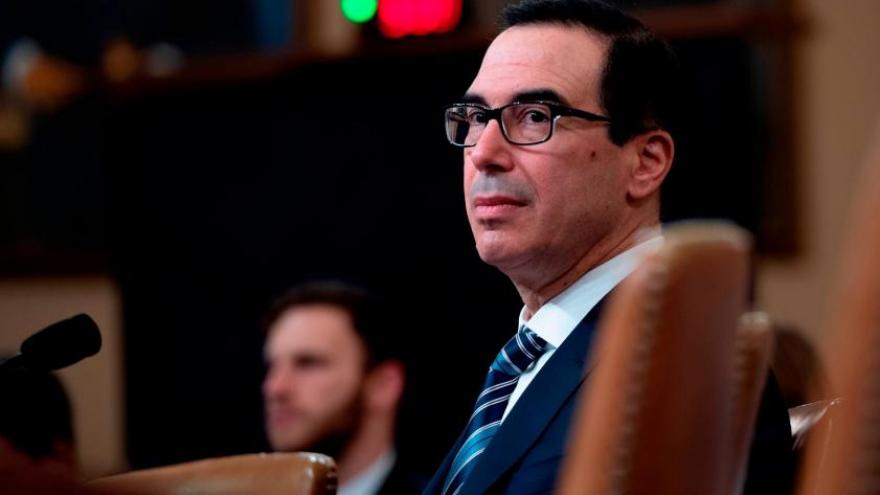 US Treasury Secretary Steven Mnuchin prepares to testify on "The President's FY2020 Budget Proposal" before the House Ways and Means Committee on Capitol Hill in Washington, DC, on March 14, 2019.

(CNN) -- The race is on for small business owners across the country to access billions in emergency funding Monday through the Small Business Administration. And, in a few hours, the Paycheck Protection Program -- initially plagued by technical hiccups and questions about if lenders were prioritizing the businesses that needed the money most -- will get a second chance to get things right.

This has always been a balancing act between perfection and getting billions out the door in enough time to actually keep a small business open. Remember, SBA is an agency that typically handles just more than $25 billion in loans a year. Now it is tasked with getting $310 billion in PPP loans out the door in a matter of days.

How long will the money last? It depends, but multiple industry experts CNN talked to over the weekend anticipate that this money could be gone within the week. Last time, it took 13 days, but banks have a much longer queue of customers this round.

"If I were betting, I would guess the money is gone in two and a half or three days," one industry expert estimated.

As PPP relaunches, Congress, the administration and industry are all still reckoning with the fallout from the lending of the last pot of money.

Among the key issues: how lenders made decisions about which clients got money first and whether some of the publicly traded companies that applied and received millions in loans should have been eligible in the first place.

Yes, Treasury and SBA have tried to send out additional guidance. Yes, the public glare of negative headlines can make a business stop and think twice before applying for this money. But Congress did not make changes to the eligibility requirements here. A lot of applications are already in the pipeline, and the loans are going to go fast. Industry is making it clear: there are millions of eligible businesses and not everyone is going to get PPP funding.

How today will work

The loan program relaunches at 10:30 a.m. ET Monday morning, and many lenders have a backlog of applications ready to upload into the system. Many institutions continued taking applications anticipating the money would eventually be replenished. Now that it has been, lenders can input that information into the official SBA system known as E-TRAN. While aides on Capitol Hill working on the SBA program have been assured E-TRAN will be up and running smoothly, a number of other last-minute changes have thrown a curveball for some financial institutions.

"I think Monday could be messy," one industry expert warned CNN.

On Sunday, SBA surprised banks and credit unions with additional guidance of how Monday is going to work.

Lenders can input a bulk of PPP applications into the SBA system to be processed. That means if they had a backlog, they can submit them all at once. This is one-time only. In order to do that, a lender has to have at least 15,000 applications ready to go. Had lenders known this was going to happen, they might have handled applications differently over the last seven days.

SBA also announced that no one institution can loan out more than 10% of the total PPP funds. That means no lender can dole out more than about $60 billion in PPP loans. Just for context, no one financial institution is close to that right now. But, many of the bigger banks have long queues of applications right now. SBA isn't counting the $60 billion set aside for smaller lenders in the total cap.

SBA also announced that it would pace the processing of loans coming into E-TRAN and make sure the program was operating on a first-come, first-serve basis.

What to watch for: Unlike the first time around, lenders are aware now of how the PPP works. They have systems in place and congressional aides have told CNN that Treasury and SBA have assured them that technical glitches that plagued the early rollout have been identified and fixed for this second launch. But there are still questions about how SBA is going to guarantee that the $60 billion that was supposed to go to small financial institutions actually goes to them. And there are still questions about how to get money out the door that initially went to publicly traded companies that have since given the money back.

Over the weekend, leading Democrats, including Speaker Nancy Pelosi and Senate Minority Leader Chuck Schumer, sent a lengthy letter to Treasury and SBA urging them to set aside $10 billion for Minority Depository Institutions and Community Development Financial Institutions as a way to ensure the money truly goes to underserved communities. The letter, however, also urged SBA to be more transparent in real time about who is getting these loans. Remember, we might be able to see some of the public companies that are getting these loans, but lawmakers have grown frustrated that SBA isn't providing more updated lists on all the companies getting this money.

The other big item to watch is who gets this money the second time around. There was a lot of negative publicity for publicly traded companies that received this money, and Treasury has since fired warning shots that companies that apply for the SBA money better be able to prove they have a legitimate need for it. Sen. Marco Rubio, R-Florida, the chairman of the Senate's Small Business Committee, has also threatened to investigate. But there isn't anything in the legislation President Donald Trump signed Friday that bars publicly traded companies from being eligible if they meet the other requirements. Does the scrutiny make better known businesses think again before applying? We'll see.

What happens when the money runs out? It all depends. All eyes are on whether Congress will actually return on May 4. There are plenty of members hungry to get back to the Capitol and send a message to constituents that they are hard at work amid the pandemic.

But they have to balance that with public health warnings and the advice of medical officials at the Capitol. Senate Majority Leader Mitch McConnell has been clear that he doesn't want to have another fight over stimulus funding until Congress returns, but the SBA's loan programs are seen as the backbone to the program, and if the money runs dry in a matter of days and Congress is kept away from Washington again, pressure will build to take action.

So what is going on with the next stimulus? Again, not much yet. We expect Democrats are going to put together their own plan, but the next stimulus will also be a test for House Speaker Nancy Pelosi. The last several bills have passed -- in part-- with Democratic leaders promising their rank-and-file members that the next stimulus package would include more Democratic priorities -including funding for state and local governments, vote by mail, and the money for the US Postal Service. Leaders can only put their members off so many times before they start to lose a precious amount of votes.

Meanwhile, McConnell also is facing conflicting views on what should be included in the next package with some of his members calling for more money for state and local governments even though McConnell has said he'd be opposed. For more on that, read this piece from CNN's Jeremy Herb, Manu Raju and me on Friday.