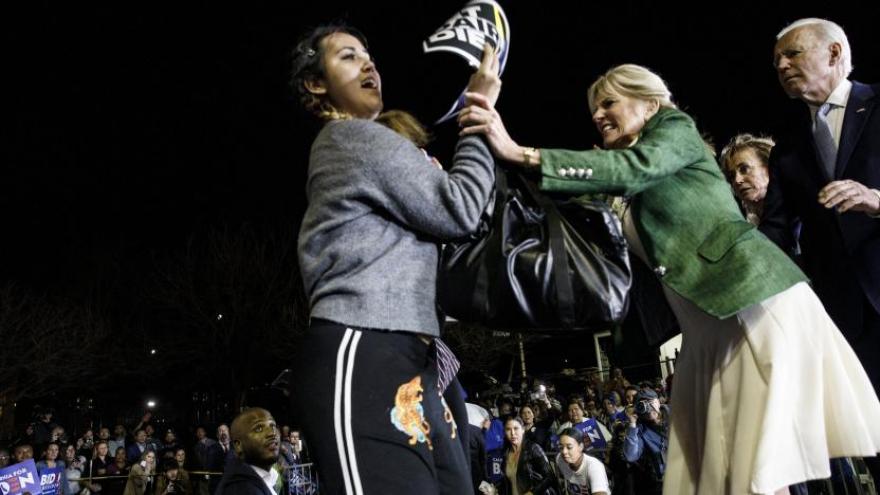 (CNN) -- The Secret Service is working through plans to provide protection to presidential candidates after protesters stormed the stage of former Vice President Joe Biden's victory rally in Los Angeles late Tuesday in a harrowing scene.

None of the Democratic presidential candidates have requested protection from the Secret Service as of Thursday evening, but officials are ready to dispatch when they're called in, the agency said.

In a statement, Secret Service Director of Communications Cathy Milhoan said that the agency's preparations for candidate protection began in January 2017, and that Secret Service leadership identified thousands of agents, Uniformed Division Officers and administrative support staff in March 2019 who would support the mission.

A Secret Service official said on Wednesday that the agency is reconsidering the timetable for rolling out campaign bodyguards after the Los Angeles incident, which saw Biden's wife, a private security guard and several senior campaign staffers rush in to defend the candidate.

"As the process for nominating the Democratic candidate for President of the United States continues to advance, Americans deserve to know that the major candidates for President are protected from all threats to their safety," Rep. Bennie Thompson, a Mississippi Democrat, wrote in a letter.

Presidential candidates historically receive Secret Service details during the primary season as their crowd sizes and the possibility of threats swells. A candidate must typically ask for the protection to initiate an approval process that includes sign-off from congressional leaders and the Homeland Security chief, although federal guidelines allow the process to begin absent a candidate's request.

In an interview with NBC News Thursday morning, Biden said "it's becoming increasingly" clear that protection will be necessary.

"I think that that's something that has to be considered the more outrageous it becomes," he said.

Before the Los Angeles encounter, the Secret Service had been setting staff assignments as it prepared to roll out protection for the Democratic candidates by mid-March, when the agency predicted the field would be narrowed to two, according to the agency official. But that process will likely now be sped up, two officials familiar with the process say.

In a statement late Wednesday, a Secret Service spokeswoman denied that the agency had changed any plans in light of the Los Angeles incident.

"The Secret Service has had teams identified, trained, and ready to deploy for months. Our men and women stand ready to execute this vital mission when a candidate makes a request through the Secretary of Homeland Security in consultation with the Congressional Candidate Advisory Panel," spokeswoman Cathy Milhoan said.

Rep. Cedric Richmond, the co-chair of Biden's campaign, says the protection was welcome.

"I can tell you that the Democratic Congress is worried about it, and the Committee on Homeland Security today sent a request in to give all the candidates Secret Service protection through the end of the campaign," the Louisiana Democrat said on a call organized by Biden's campaign.

Biden was just minutes into his speech on Tuesday night when two women rushed toward the podium where the former vice president was celebrating his Super Tuesday resurgence.

The first woman, who brandished a sign and shouted, "Let dairy die," was grabbed by Biden's private security guard and led off stage as a frightened Joe and Jill Biden looked on. Seconds later, a second woman climbed onto the stage shouting. Jill Biden moved in front of her husband to box him out as Symone Sanders, a senior campaign adviser, charged onto the platform and hauled the woman away by the torso.

None of the Democrats seeking their party's nomination for president have so far been given a Secret Service detail. In past cycles, some politicians have avoided seeking the protection so they can keep close contact with voters on the trail.

Biden maintained a Secret Service detail for six months after the Obama administration ended, in line with agency protocol, and had recently been using private security.

Under 2017 Department of Homeland Security guidelines, the top Democratic and Republican leaders in Congress -- House Speaker Nancy Pelosi, Senate Minority Leader Chuck Schumer, Senate Majority Leader Mitch McConnell and House Minority Leader Kevin McCarthy -- sign off on the decision to approve the Secret Service protection for candidates in consultation with the Homeland Security secretary and the Secret Service after reviewing the "scale and seriousness of the candidate's campaign," according to Thompson.

The congressional group is scheduled to meet Wednesday afternoon on coronavirus.

In past presidential campaign cycles, leading candidates had already been granted Secret Service protection at this point in the race. Then-Republican front-runners Donald Trump and Ben Carson received details in November 2015, while Sen. Bernie Sanders got his in February of 2016. Hillary Clinton already traveled with Secret Service officers due to her status as a former first lady when she ran in 2016.

After a man shouted at her husband and approached his lectern at a New Hampshire rally last month, she leaped from her chair to help others keep the man from getting too close.

Asked by reporters about the heckler after the New Hampshire event, Jill Biden laughed and said, "I'm a good Philly girl."

CLARIFICATION: This story has been updated to more accurately describe the Secret Service's response after Tuesday's incident.

A statement from a Secret Service spokeswoman also has been added.