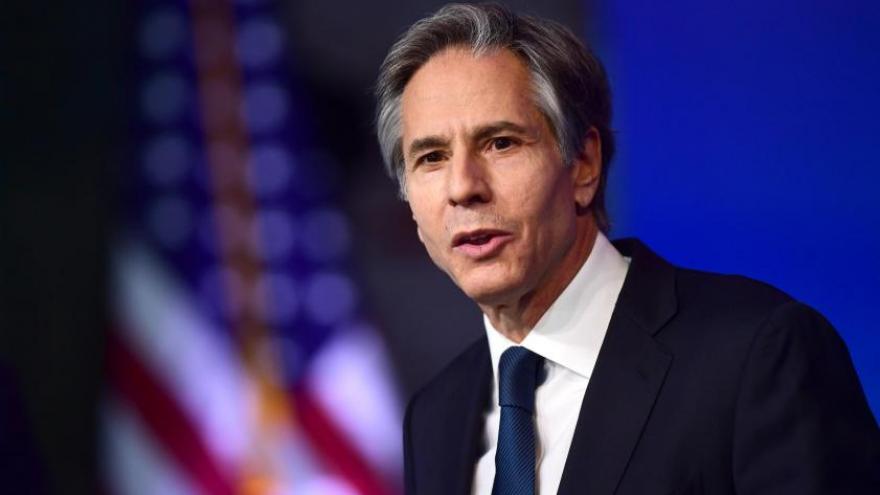 Secretary of State Antony Blinken arrived in Kabul, Afghanistan, on April 15 in an unannounced visit to the country where US troops have been fighting for nearly 20 years.

(CNN) -- Secretary of State Antony Blinken arrived in Kabul, Afghanistan, Thursday in an unannounced visit less than 24 hours after the United States and the NATO coalition formally announced they would withdraw their troops from the country after nearly two decades.

In remarks alongside Afghan political leaders, Blinken attempted to underscore that although the US military presence on the ground was drawing to a close, its commitment to the people and the country would remain.

Blinken also emphasized the importance of the Afghan parties working to achieve a peaceful settlement and warned that the Taliban would "never be legitimate" if it rejected the political process and tried to take power by force.

On Wednesday, President Joe Biden announced that all US troops would begin to withdraw by May 1 -- the deadline set out in the deal the Trump administration signed with the Taliban last year -- and would be gone by September 11 -- the 20th anniversary of the deadly terrorist attack on US soil that set into motion America's longest running war.

In a press conference in Kabul Thursday, the top US diplomat acknowledged this was "a time of transition, and with any transition comes uncertainty, comes concern," but suggested there was an understanding among US and Afghan officials that Afghanistan had changed from the country it was in 2001 or even 2011, and thus they need to build out "a partnership for our two countries fitting for 2021."

Blinken told reporters that the takeaways from his meetings with President Ashraf Ghani and Dr. Abdullah Abdullah, the chairman of the High Council for National Reconciliation, "were pretty consistent across the board: respect for the President's decision, profound appreciation for our years of partnership, but also commitment to and optimism about our next chapter."

The top US diplomat met with both US troops and embassy personnel and thanked both groups for their service.

"I know this is a moment for many of mixed emotions. These are hard choices, hard decisions," he told the uniformed service members.

"The reason I'm here so quickly after the President's speech last night is to demonstrate literally, by our presence, that we have an enduring, an ongoing commitment to Afghanistan," Blinken said, according to the press pool accompanying him. "What you and your predecessors did over the last 20 years is really extraordinary."

Blinken told the embassy personnel, "I can only imagine that for many of you this time feels particularly stressful and maybe even emotional. You all serve one of the most challenging posts in the world," according to the pool.

"We are committed to Afghanistan and despite the fact that our military forces are leaving Afghanistan, we are not," he said.

Blinken also met with members of Afghan civil society, mostly women, at the US Embassy, according to the pool.

Although administration officials have pledged to continue to support the rights of women and civil society, there are sharp concerns that the withdrawal of US troops without a durable settlement in place could risk the gains that were made over the last two decades. A US intelligence report also assessed that "prospects for a peace deal will remain low during the next year" and "the Taliban is likely to make gains on the battlefield, and the Afghan Government will struggle to hold the Taliban at bay if the coalition withdraws support."

Blinken did not dispute the intelligence report in remarks on Wednesday in Brussels but on both days stressed that the administration had concluded that a continued military presence was not in the best interest of the US.

"There is no military solution to the conflict that remains," Blinken said Thursday in Kabul.

"The only path forward to a durable, lasting and just end to the conflict is through negotiation, is through a political agreement and ultimately is through compromise," he said. "I hope that the Taliban understands that as well."

"It's very important that the Taliban recognize that it will never be legitimate and it will never be durable if it rejects the political process and tries to take the country by force," he added.

The top US diplomat said the United States had "offered concrete ideas and support," but recognized the peace process must be "Afghan-led and Afghan-owned."

Talks between the Afghan government and the Taliban in Doha have largely stalled, and Blinken said Thursday they were waiting to hear "a definitive response" from the Taliban about its participation in the upcoming Istanbul conference.

"The goal is precisely what we've been working to do in recent weeks, and that is to accelerate the peace process," he said.

"My hope is that all the Afghan parties are preparing for constructive participation in the conference and this would be, I think, a positive start, to moving in the direction that I think everyone I've talked to recognizes is the only direction for a durable and just and last peace and an end to the conflict," Blinken added.