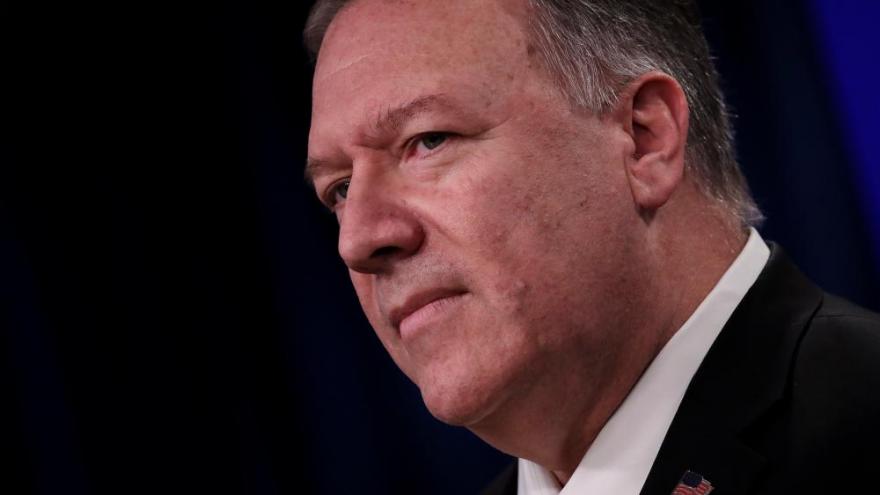 Secretary of State Mike Pompeo landed in Kabul, Afghanistan, Monday in an unannounced trip to the country.

(CNN) -- Secretary of State Mike Pompeo made an unannounced visit to Kabul, Afghanistan, Monday as efforts to broker a peace deal for the country are already on the rocks.

It was the first visit by the top US diplomat to Afghanistan since the signing of the US-Taliban agreement in Doha last month -- a historic agreement that was meant to trigger intra-Afghan negotiations and has already prompted an initial withdrawal of US troops. The future of that agreement has been called into question by continued violence by the Taliban against Afghan security forces and by a high-stakes political dispute in Kabul.

It was this dispute between President Ashraf Ghani and his political rival Abdullah Abdullah -- who have both claimed victory in the country's presidential elections -- that drew Pompeo to the Afghan capital on Monday, a senior State Department official told the traveling press.

"The fear is that unless this crisis gets resolved and resolved soon, that could affect the peace process which was an opportunity for this country that have stood in this 40 years long war," the official said. "Now he's come to help to push, to encourage and to point out what our expectations are and what that assessment is if if they don't do the right thing."

During the visit, Pompeo met with Ghani for over an hour and with Abdullah for 40 minutes. He also met with Ghani and Abdullah jointly, and held a meeting with Afghan officials from the Ministries of Interior and Defense and the National Directorate of Security.

Following his day in Kabul, Pompeo traveled to Doha. The top US diplomat was in the Qatari capital less than a month ago for the signing of the US-Taliban deal.

That agreement outlined a series of commitments related to troop levels, counterterrorism, and the intra-Afghan dialogue aimed at bringing about "a permanent and comprehensive ceasefire."

"This is a hopeful moment, but it's only the beginning," Pompeo said at a news conference at the time. "There's a great deal of hard work ahead on the diplomatic front."

The US has begun withdrawing some troops from Afghanistan, part of the initial drawdown to 8,600, a spokesman for US forces in Afghanistan announced in early March. However, the intra-Afghan dialogue, which was written in the agreement as beginning on March 10, has yet to start.

According to US Special Representative for Afghanistan Reconciliation Zalmay Khalilzad, the Taliban and the Afghan government just a day ago held their first technical talks on prisoner releases -- a major point of contention in moving forward with a dialogue between the two sides.

Khalilzad said the US and Qatar facilitated the talks, which were held via Skype videoconferencing.

"The over two-hour technical discussion today was important, serious, and detailed. My thanks to all sides. Everyone clearly understands the coronavirus threat makes prisoner releases that much more urgent," he said on Twitter Sunday. "All sides conveyed their strong commitment to a reduction of violence, intra-Afghan negotiations, and a comprehensive and permanent ceasefire. We have also agreed to a follow-on technical meeting in the next two days."

A very senior source in the Afghan government called the technical talks with the Taliban "a positive step ahead."

"This shows Taliban can't and should not bypass the Afghan government if they are sincere on peace," they said.