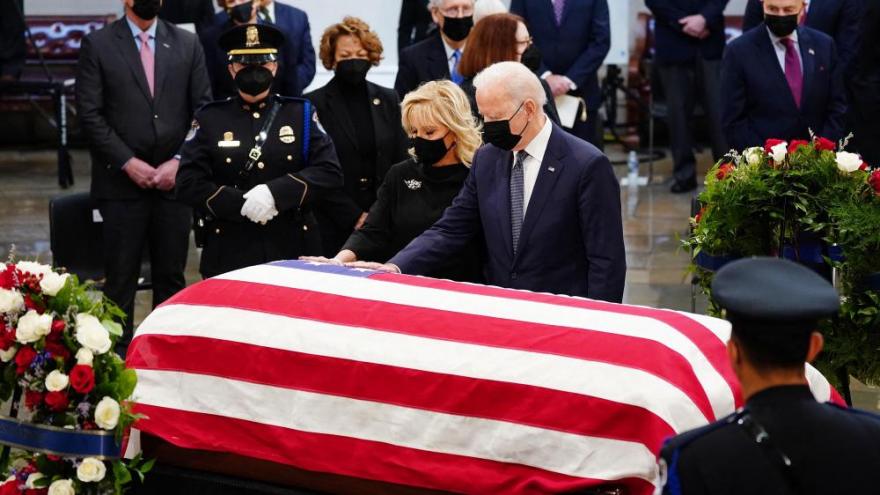 (CNN) -- A funeral service and tribute ceremony for the late Kansas Republican Sen. Bob Dole are scheduled to be held in Washington, DC, on Friday.

Dole, who had announced in February he was being treated for advanced lung cancer, died on Sunday.

The funeral service at Washington National Cathedral will begin Friday at 11 a.m. ET, according to a schedule of the arrangements. Along with family members and close friends, President Joe Biden is expected to attend. Biden, former Sen. Pat Roberts, former Sen. Tom Daschle and Dole's daughter, Robin Dole, are expected to offer tributes. Lee Greenwood will also perform.

The funeral will be live-streamed onto large screens at the National World War II Memorial in Washington, and at 1:15 p.m. ET, Dole's motorcade is expected to pause at the memorial, according to the schedule. At the memorial on the National Mall, actor Tom Hanks and Savannah Guthrie of NBC's "Today" will deliver remarks. Former North Carolina Sen. Elizabeth Dole, the late senator's wife, will lay a wreath in honor of her late husband.

Dole served for 27 years as a US senator from Kansas and was Senate majority leader twice. A three-time presidential candidate, he ran unsuccessfully for president against Bill Clinton in 1996 as the Republican nominee. He also served as President Gerald Ford's running mate in 1976 after Nelson Rockefeller declined to stay on as vice president.

He was a World War II veteran who enlisted in the Army in 1942 at the age of 19 and was seriously wounded while trying to carry a fellow soldier to safety. He would go on to spend 39 grueling months in and out of hospitals, recuperating from his near fatal injuries, which left his right arm permanently disabled and his left arm minimally functional. Dole, who advocated for the nation's veterans throughout his career, received the Purple Heart twice and two Bronze Stars with an oak leaf cluster for his service in World War II.

His injuries changed the trajectory of his life, leading him to pursue a law degree and a career in politics. He served a term in the Kansas House of Representatives and later for eight years as Russell County prosecutor. Dole was elected to the US House to represent Kansas in Washington in 1960, serving four terms before he was elected to the US Senate in 1968.

After leaving public office, Dole served as the national chairman of the World War II Memorial Campaign, helping to raise millions to construct the first memorial dedicated to all World War II veterans. In his 90s -- as one of the longest-living and most prominent members of the Greatest Generation -- he spent his Saturdays greeting his fellow veterans as they visited the memorial in Washington after it opened to the public in 2004.

In January 2018, Dole became the eighth US senator to receive the Congressional Gold Medal, the highest civilian honor bestowed by Congress. Dole was the only former Republican nominee to support Donald Trump's candidacy in the 2016 election, and Trump recognized his service to his country at the medal ceremony.

Following Friday's services in Washington, the late senator's casket and his family will travel to Joint Base Andrews in Maryland for his departure to Kansas. There will be a public viewing in his hometown of Russell, Kansas, on Saturday morning, followed by an afternoon service at the Kansas State Capitol. Dole's casket and family are then expected to return to Washington for the senator's internment.

On Thursday, Biden and congressional leaders honored the late senator at the US Capitol, where Dole was lying in state.

Biden on Sunday evening ordered that flags at the White House and other public buildings and facilities be flown at half-staff in honor of Dole.