Sen. Tim Scott says he's not sure there will ever be a law establishing a use of force standard 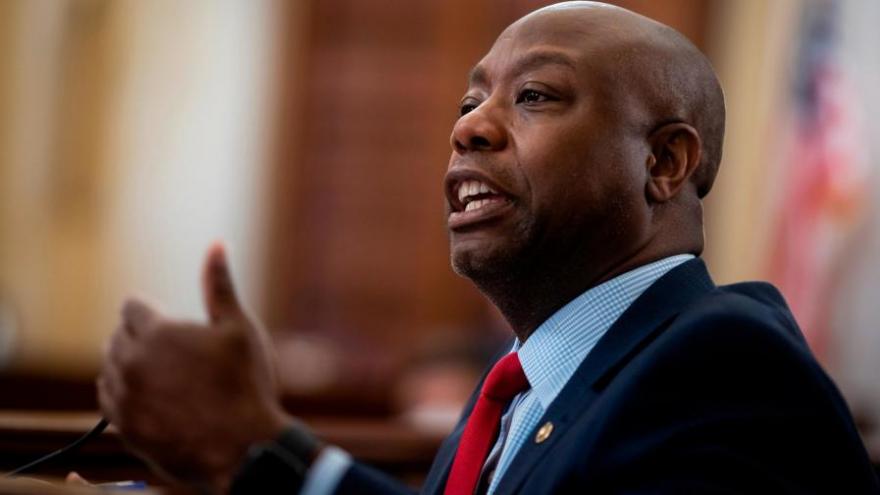 Republican Sen. Tim Scott said that he's "not sure we're going to ever codify in law a use of force standard," as Congress works to tackle police reform legislation.

(CNN) -- Republican Sen. Tim Scott said Sunday that he's "not sure we're going to ever codify in law a use of force standard," as Congress works to tackle police reform legislation.

"I think it's really difficult to establish a codified in law standard for use of force," Scott, who represents South Carolina, said on NBC when asked if one should be established. "There are millions of scenarios that play out. It's one of the reasons why what we have tried to achieve through the legislation is finding the best practices of use of force around the country and then provide that clarity and guidance for those departments who may need to have a better perspective on use of force."

"So we're getting at it, but I'm not sure we're going to ever codify in law a use of force standard," he added.

Speaking on the issue of qualified immunity, a legal doctrine activists say shields law enforcement from accountability, Scott said that rolling it back is something "that most Republicans don't like at all, to include myself."

"The question is, is there a path forward that we take a look at the necessity of eliminating bad behavior within our law enforcement community? Is there a path forward? I think we'll find that. I'm not sure that it's qualified immunity, it seems like it won't be de-certification," he said.

Scott also said in a Sunday interview with CBS that reducing qualified immunity is a "poison pill to our side" and noted that President Donald Trump has signaled it's "off the table."

In regard to ending no-knock warrants, Scott expressed hesitancy due to lack of a database on the warrants. He called the recent shooting death of Breonna Taylor by police in Kentucky "tragic without question," but said he wants to use the case to "have an act that requires more data to be provided so that we can actually come out with policies that are consistent with the best use of no-knocks or elimination of no-knocks."

Asked last week about a timeline for a Republican-backed police reform bill, Scott said he's an "optimist" and thinks they can get something done very soon because "time is of the essence."

Democrats, meanwhile, introduced sweeping legislation last week aimed at cracking down on police brutality and recording patterns of misuse of force across the country. The legislation includes a ban on chokeholds, as well as the creation of a National Police Misconduct Registry "to prevent problem officers from changing jurisdictions to avoid accountability," according to a summary document obtained by CNN.