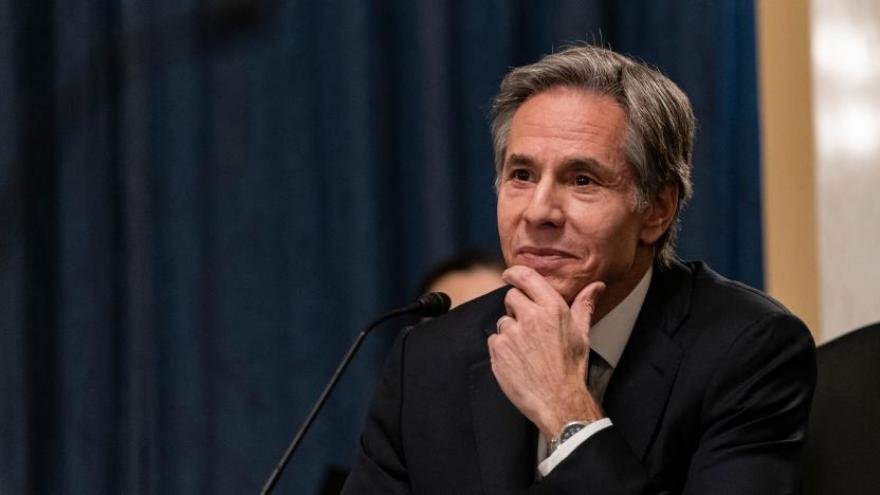 (CNN) -- The Senate voted Tuesday to confirm Antony Blinken as the new US secretary of state.

With Blinken's confirmation, President Joe Biden now has a number of key members of his national security team in place. His Director of National Intelligence Avril Haines was confirmed on Inauguration Day and his Defense Secretary Lloyd Austin was confirmed last Friday.

The new top US diplomat, a long-time aide to Biden, faces the challenges of restoring America's standing in the world and reinvigorating a department where many felt demoralized under the past administration.

He will also be on the forefront of directing a sharp turn from "America First" foreign policy to one that focuses on multilateralism and coalitions.

"The President-elect believes that if Iran comes back into compliance, we would too," Blinken said at his hearing a day before the inauguration last week. "But, we would use that as a platform with our allies and partners who would once again be on the same side with us, to seek a longer and stronger agreement. And also, as you and the chairman have rightly pointed out, to capture these other issues, particularly with regard to missiles and Iran's destabilizing activities. That would be the objective."

"Having said that, I think we're a long way from there, we would have to see once the President-elect is in office what steps Iran actually takes and is prepared to take," Blinken said.

On China, he conceded that President Donald Trump "was right in taking a tougher approach to China."

"I disagree, very much, with the way that he went about it in a number of areas, but the basic principle was the right one, and I think that's actually helpful to our foreign policy," Blinken said.

He pledged to restore the agency he now leads, saying he is "committed to advancing our security and prosperity by building a diplomatic corps that fully represents America in all its talent and diversity."

And where his predecessor Mike Pompeo pledged to bring "swagger," Blinken called for "humility and confidence."

"Humility because we have a great deal of work to do at home to enhance our standing abroad. And humility because most of the world's problems are not about us, even as they affect us. Not one of the big challenges we face can be met by one country acting alone -- even one as powerful as the US," he said. "But we'll also act with confidence that America at its best still has a greater ability than any country on earth to mobilize others for the greater good."