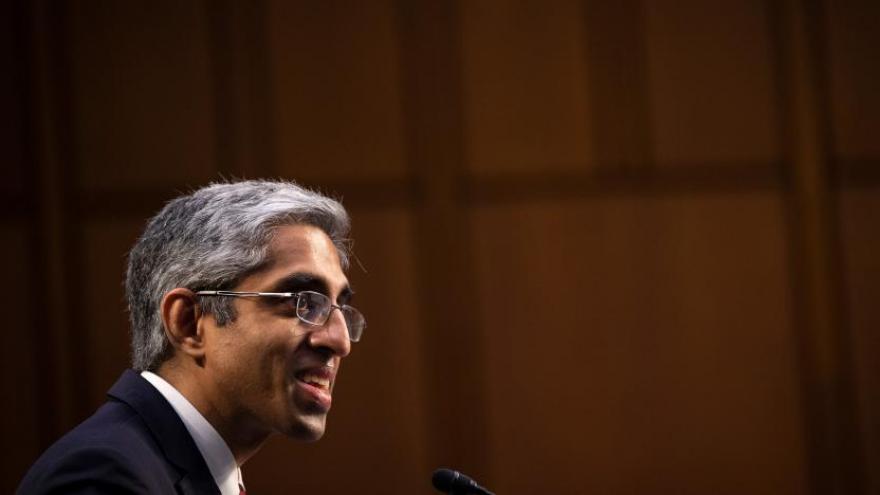 The Senate on Tuesday confirmed Dr. Vivek Murthy as US surgeon general. In this image, Murthy testifies on Capitol Hill in Washington, DC on February 25.

(CNN) -- The Senate on Tuesday confirmed Dr. Vivek Murthy as US surgeon general, a role he had held under the Obama administration and reprises during a key chapter in the Biden administration's response to the coronavirus pandemic.

Lawmakers voted 57-43 to confirm Murthy, with Republican Sens. Susan Collins of Maine, Bill Cassidy of Louisiana, Roger Marshall of Kansas, Lisa Murkowski and Dan Sullivan of Alaska, Rob Portman of Ohio and Mitt Romney of Utah joining all 50 Democrats in voting to support his nomination.

Murthy's confirmation comes after Asian Democratic Sens. Tammy Duckworth of Illinois and Mazie Hirono of Hawaii vowed Tuesday to oppose President Joe Biden's Cabinet nominees who aren't minorities until there's movement by the White House to diversify the administration with Asian American appointments. With the Senate confirming Biden's final Cabinet secretary nominee, former Boston Mayor Marty Walsh, as Labor secretary Monday evening, Biden is the first president in more than 30 years to have all of his original Cabinet secretary nominees confirmed to their posts as the 15 major agency heads.

Murthy was a top health adviser to the Biden campaign. He was part of Biden's public health advisory committee as the pandemic first took hold in the US and served as a co-chair of the President-elect's Covid-19 advisory board during the transition.

Two sources familiar with the matter told CNN in December that Murthy is expected to have an expanded portfolio in the Biden administration. As surgeon general under President Barack Obama, a position he held from 2014 to 2017, Murthy helped lead the national response to the Ebola and Zika viruses and the opioid crisis, among other health challenges.

Murthy faced opposition from some Republicans during his Senate confirmation process in 2014 because of his characterization of gun violence in the US as a public health crisis. He was ultimately narrowly confirmed.

He held the role for about two years under the Obama administration until he was asked to resign by the Trump White House in 2017 with about two years remaining in his standard four-year term, a dismissal some Democrats criticized at the time as politicizing the position.

Trump then nominated Dr. Jerome Adams, an anesthesiologist who previously served as the Indiana state health commissioner, to the job in 2017. Adams' four-year term was set to expire in September before he announced in January that he had been asked by Biden's team to leave his role.