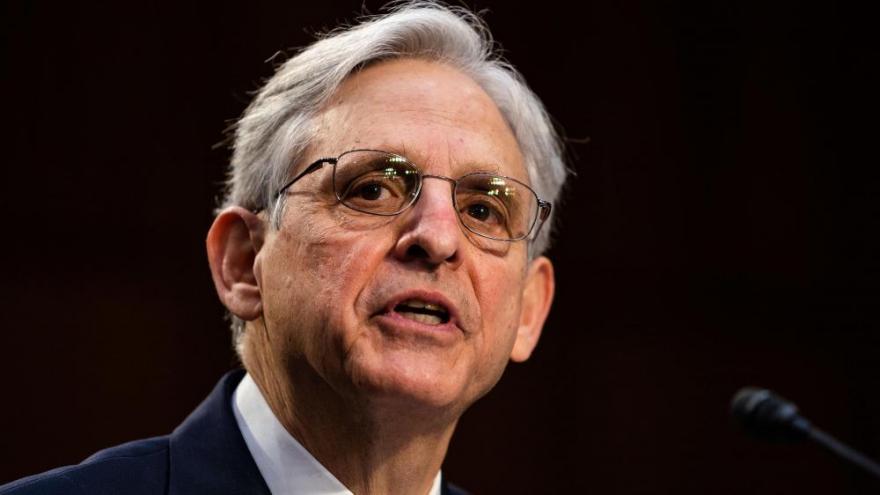 The Senate voted to confirm Attorney General nominee Merrick Garland on Wednesday. In this image, Garland testifies on Capitol Hill in Washington, DC on February 22.

(CNN) -- The Senate voted to confirm attorney general nominee Merrick Garland on Wednesday, sending the appellate judge on his mission to uphold the integrity of the Justice Department after its actions over the past years threatened to undermine it.

The former chief judge of the US Court of Appeals for the DC Circuit has been praised by members of both parties. He pledged in his nomination hearing last month to "fend off any effort by anyone" to politically influence the Justice Department's investigations, and that his first priority would be to fully prosecute the "heinous" crimes committed in the attack on the US Capitol on January 6.

Garland, who was nearing his 24th anniversary as a federal appellate judge, formally resigned from the DC Circuit Court of Appeals on Wednesday, sending a letter to President Joe Biden shortly before his confirmation.

"America can breathe a sigh of relief that we are finally going to have someone like Merrick Garland leading the Justice Department," said Senate Majority Leader Chuck Schumer, a Democrat from New York. He called Garland "someone with integrity, independence, respect for the rule of law and credibility on both sides of the aisle."

Garland will soon face politically charged questions at the Justice Department, including whether the Justice Department should wade into former President Donald Trump's role in the Capitol riot, and how to handle a federal probe into Biden's son, Hunter Biden. Federal investigators in Delaware have been examining multiple financial issues, including whether Hunter Biden violated tax and money laundering laws in business dealings in foreign countries. Garland said last month that he had not spoken to the President about the case.

Garland also could oversee the investigation of the FBI's Russia probe. But he said in his nomination hearing that he didn't have "any reason to think" that special counsel John Durham "should not remain in place."

"The President made abundantly clear in every public statement before and after my nomination that decisions about investigations and prosecutions will be left to the Justice Department," said Garland. "That was the reason that I was willing to take on this job."

In March 2016, then-President Barack Obama nominated Garland to serve as a justice on the Supreme Court. Then-Senate Majority Leader Mitch McConnell and Senate Republicans blocked his nomination, claiming that the public should vote for the next president to decide the lifelong appointment. But in September 2020, then-President Donald Trump nominated Judge Amy Coney Barrett to the Supreme Court. And on October 26, about a week before Election Day, she was confirmed by the Republican-controlled Senate.

McConnell said he voted to confirm Garland's nomination as attorney general "because of his long reputation as a straight-shooter and legal expert," calling his "left-of-center perspective" within "the legal mainstream."

McConnell said he discussed with Garland the federal investigation of the Capitol riot to overturn Congress' certification of the 2020 election and that law enforcement "needs to continue the work of identifying, arresting, and prosecuting those who broke the law." He urged Garland to treat "with equal seriousness" the "political violence" of the Left, and also to oppose efforts by the Biden administration to skirt Congress and use its executive power to create programs like DACA.

"When confirmed, Judge Garland must not back other constitutionally-corrosive efforts to effectively repeal laws just by ignoring them," said McConnell.

Garland said at his hearing that the current threat from White supremacists is a "more dangerous period than we faced at that time." He also gave a brief, yet emotional, anecdote in response to a question about his family's history in confronting hate and discrimination. Garland fought back tears as he explained why leading the Justice Department was important to him.

"I come from a family where my grandparents fled anti-Semitism and persecution," said Garland. "The country took us in and protected us. I feel an obligation to the country to pay back."