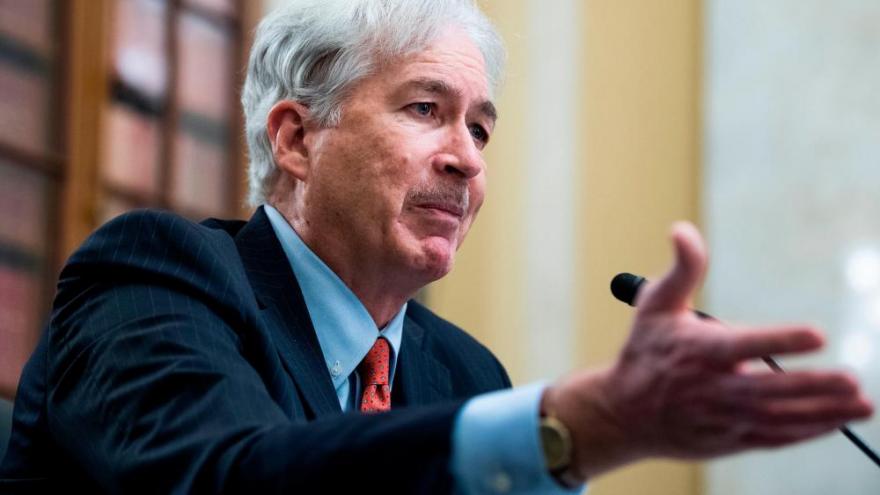 (CNN) -- The Senate on Thursday confirmed William Burns to be President Joe Biden's CIA director, approving his nomination with no objections after Texas GOP Sen. Ted Cruz lifted his hold.

The Senate cleared Burns' nomination by voice vote on the floor Thursday. With his confirmation, Biden now has his full team of top national security officials in place.

Biden tapped Burns as CIA director in January, turning to a longtime diplomat who was deputy secretary of state in the Obama administration and held foreign service posts for more than three decades. He will become the first leader in the CIA's history whose lifelong experience comes from the State Department.

Burns was approved unanimously by the Senate Intelligence Committee earlier this month, and he received bipartisan praise during his February confirmation hearing.

The nomination was never in doubt, but a quick confirmation on the Senate floor was initially blocked by Cruz, who put a hold on Burns' nomination in an effort to pressure the Biden administration over the Russia-Germany natural gas Nord Stream 2 pipeline. Republicans, including Cruz, have called on the administration to issue sanctions to stop the completion of the pipeline between Russia and Germany.

On Thursday, Cruz said statement that he welcomed a new statement from Secretary of State Anthony Blinken that "reinforces to the international community that there is a bicameral, bipartisan, and whole of government commitment in the United States to stopping Putin's Nord Stream 2 pipeline."

"In light of the Secretary's strong declaration, I'm following through on my commitment to lift" the holds on Burns and Brian McKeon, Biden's nominee for Deputy Secretary of State for Management and Resources, Cruz said in a statement. McKeon was also confirmed by unanimous consent Thursday afternoon.

Blinken issued a statement Thursday that that the administration believes this is a bad deal and that State "is evaluating information regarding entities that appear to be involved."

"The Department reiterates its warning that any entity involved in the Nord Stream 2 pipeline risks US sanctions and should immediately abandon work on the pipeline," Blinken said.

At his confirmation hearing last month, Burns stressed that intelligence must not become political.

"That is exactly what President Biden expects of CIA. It was the first thing he told me when he asked me to take on this role," he added. "He said he wants the agency to give it to him straight -- and I pledged to do just that, and to defend those who do the same."

Under the Trump administration, CIA director was a Cabinet-level position, but it is not in the Biden administration. Director of National Intelligence Avril Haines, who leads the US intelligence community, is a member of the Biden Cabinet.