Senate Democrats push for $2,000 stimulus checks as clock winds down on 116th Congress 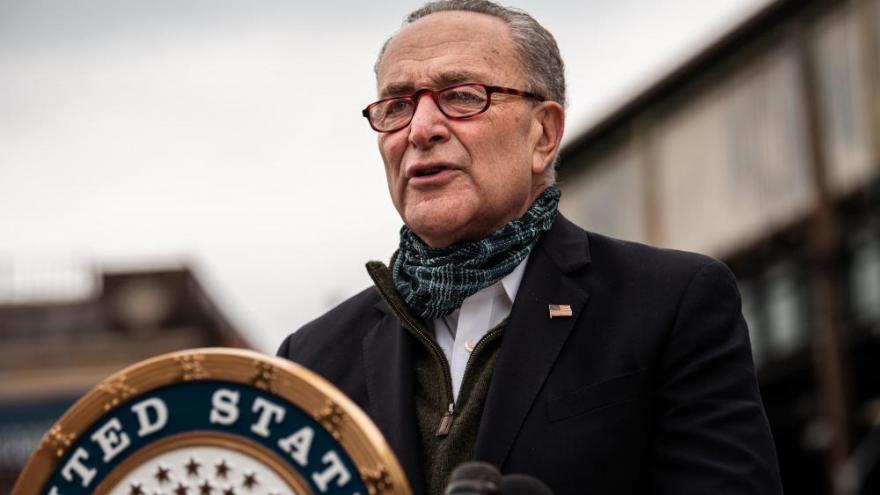 Senate Democrats and independent Sen. Bernie Sanders of Vermont pushed, without success, for a Senate vote on $2,000 stimulus checks on Jan. 1 as the clock winds down on the 116th Congress.

(CNN) -- Senate Democrats and independent Sen. Bernie Sanders of Vermont pushed, without success, for a Senate vote on $2,000 stimulus checks Friday as the clock winds down on the 116th Congress.

Efforts by Senate Minority Leader Chuck Schumer, a New York Democrat, and Sanders to secure a vote on increasing the direct payment amounts that Americans under a certain income level receive were blocked by Senate Republicans, who have largely argued that increasing stimulus checks to $2,000 would not be the kind of "targeted relief" necessary to respond to the economic distress caused by the pandemic, despite the fact that President Donald Trump has called for that amount.

Schumer took to the Senate floor, saying, "The Senate can start off this new year by adding to that sense of hope by sending $2,000 checks to struggling American families." He then pushed for a vote on $2,000 checks, but was blocked when a GOP senator objected.

The House of Representatives on Monday passed a measure to increase stimulus checks to $2,000 after the President championed the effort, sending the bill to the Senate where its future has been less certain. Time for action is running out. The 117th Congress will convene on Sunday.

The legislation's approval in the House came after Trump signed a sweeping coronavirus relief bill into law Sunday evening. That measure, which was negotiated on a bipartisan basis, provides for $600 in direct payments, but after a deal was brokered and passed out of Congress, Trump railed against the amount as too low and called for $2,000 checks instead, which House Democrats seized upon to push for an increase.

"I'll ask consent for the final time that the Senate set a time for a vote on the House bill to provide $2,000 checks. I've done it every day this week. This is it -- the last chance for the 116th Congress to pass $2,000 checks and to say to regular Americans that help is on the way. Let's have a vote," Schumer said.

Senate Majority Whip John Thune interjected, however. "This proposal is a shot-gun approach," the South Dakota Republican said, adding, "If you really want to help people who need this the most at a time when we are running a $26 trillion debt borrowing every penny that we're making available to do this, we ought to sit down and figure out the most efficient, effective, targeted way possible. This absolutely does not do that." Thune then moved to block the request. "I object," he said. In the Senate, it only requires one senator to object to block a request to take action by unanimous consent.

Senate Majority Leader Mitch McConnell on Friday reiterated his criticism of the House-passed bill increasing stimulus checks to $2,000 as "simply not the right approach" and repeated his argument that much of it is "socialism for rich people."

Later in the day on Friday, Sanders also requested the Senate hold a vote on the House bill increasing stimulus checks to $2,000, but it was again blocked by Republicans. Sanders this time tried to convince Republicans not to object by also calling for a vote on McConnell's alternative bill, which would combine increased direct payments with a repeal of the online liability protections known as Section 230 and the establishment of a commission to study voter fraud, for which there has been no evidence.

The move was blocked, however, by another objection. "I know Senator Toomey is delayed coming to the floor, on his behalf I will object," said GOP Sen. John Cornyn of Texas, referring to his Republican colleague from Pennsylvania.

"Bring the bill to the floor," Sanders said at one point, his voice getting louder as he called for a vote on the checks.

Sen. Josh Hawley of Missouri, a Republican who has been pushing for $2,000 stimulus checks, came out to "enthusiastically support" Sanders' measures on the floor.

Hawley reminded senators that Trump backs $2,000 checks, expressing frustration it hasn't come up for a vote. "The President of the United States said that's the level he supported ... this is the number he has asked for .. and yet we can't even seem to get a vote on it."

Both Hawley and Sanders shared stories in floor remarks about Americans desperate for help, arguing that a $2,000 check could be critical.

"A mother in Virginia wrote: $2,000 means I can afford to feed my three kids. Now maybe we should give her a long lecture on macroeconomics and how well the stock market is doing," Sanders said.

Hawley spoke of a woman in his home state who "is donating plasma in order to get some money to pay for groceries."

"These are working people. ... and all that they ask for, as I have said many times on this floor before, is a chance to get back up on their feet and be able to provide for their families, and I can't for the life of me understand why we cannot get so much as a vote on these bills," Hawley said.