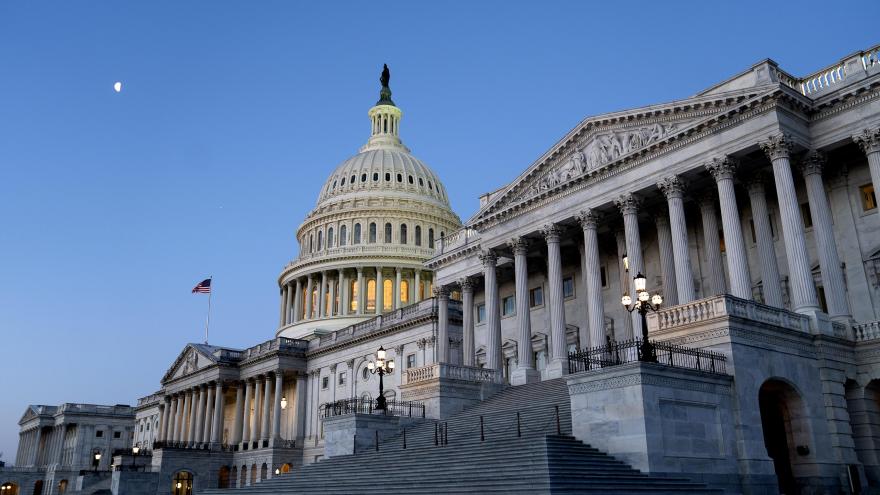 The U.S. Capitol in Washington, D.C., U.S., on Friday, March 5, 2021. Senate Democrats face a gauntlet of Republican attempts to rein in President Biden\'s $1.9 trillion stimulus package in a marathon session of votes that will extend the timetable for passage into the weekend. - Stefani Reynolds/Bloomberg/Getty Images

(CNN) -- Jobless Americans would get a smaller weekly boost to unemployment benefits but receive those payments for a little longer under the Senate's revised $1.9 trillion coronavirus relief package that Senate Democrats agreed to after hours of negotiations Friday.

The latest Senate version calls for providing a $300 a week federal enhancement, rather than the $400 passed by the House last week -- but the extra cash will run through September 6, rather than ending August 29.

Two key pandemic unemployment benefits programs that start phasing out after next weekend would also be extended through September 6.

The new arrangement would also make the first $10,200 worth of benefits tax-free for households with annual incomes less than $150,000.

Progress on the bill was halted after West Virginia Sen. Joe Manchin -- the Democrats' crucial 50th vote -- indicated he wouldn't support the initial changes his Senate colleagues were proposing to the House version, which would have extended the $300 benefits boost through the end of September. Instead, he suggested he was open to a less generous plan floated by the Republicans, but eventually sided with his party after extracting some concessions.

The deal came as the Senate was voting Friday on a series of amendments in a process known as a "vote-a-rama" before moving to a final vote on the entire relief package.

The Pandemic Unemployment Assistance program provides benefits to freelancers, gig workers, independent contractors and certain people affected by the pandemic, while the Pandemic Emergency Unemployment Compensation program increases the duration of payments for those in the traditional state unemployment system.

Congress created these two temporary programs, along with a $600 weekly boost that lasted four months, in its $2 trillion relief package nearly a year ago to help cushion laid-off workers during the pandemic-fueled economic downturn. The programs were extended and the $300 weekly enhancement was added as part of lawmakers' $900 billion relief deal passed in December.

Stressing that millions of struggling Americans remain out of work, President Joe Biden called for providing a $400 boost and continuing the programs through the end of September as part of the massive relief package he unveiled just before taking office.

"The President supports the compromise agreement and is grateful to all the senators who worked so hard to reach this outcome," press secretary Jen Psaki said. "It extends supplemental unemployment benefit into September and helps the vast majority of unemployment insurance recipients avoid unanticipated tax bills."

Racing toward a deadline

The differences in the Senate and House bills, however, are one more issue the two chambers have to work out before they send the final legislation to the President for his signature.

Lawmakers' self-imposed deadline of March 14 for passing the relief package is fast approaching. That's when out-of-work Americans will start running out of benefits in the two programs, which will then phase out over the subsequent month. The $300 enhancement also ends next weekend.

An estimated 11.4 million workers will lose their unemployment benefits between mid-March and mid-April unless Congress acts, a recent study by The Century Foundation found.

Even if lawmakers finish the bill in coming days, some jobless Americans may see a lapse in benefits since it can take a few weeks for state unemployment agencies to program the new provisions into their systems.

This story has been updated to reflect the latest Senate negotiations.