Senate GOP plans another round of direct checks for Americans in next relief bill, McConnell says 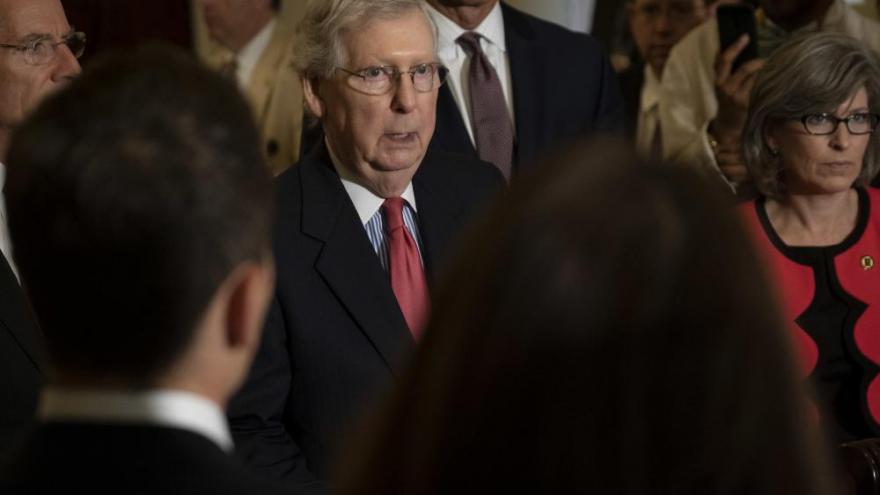 Senate Republicans plan to include a second round of stimulus checks for Americans in the next coronavirus relief package. The picture shows McConnell speaking to the media on July 16, 2019 in Washington, DC.

(CNN) -- Senate Republicans plan to include a second round of direct payments, or stimulus checks, for Americans in the next coronavirus relief package, Majority Leader Mitch McConnell announced Tuesday.

"Speaking of building on what worked in the CARES Act, we want another round of direct payments" McConnell said, referring to the last coronavirus bill that offered payments of up to $1,200 for individuals and $2,400 for families.

The details of the final proposal remain a work in progress, with White House negotiations and Republicans shuffling back and forth to meetings throughout the day in an effort to coalesce around a unified overall plan in the range of $1 trillion.

In his remarks, the majority leader did not further specify how much and what income bracket Americans would need to be in to qualify for stimulus checks. It has been discussed within the Republican ranks whether the checks should be more directly targeted at lower income individuals, but it remains an open question.

McConnell has touted the success of the direct checks in the last relief package, in local appearances across Kentucky in recent weeks, and ahead of the next bill suggested Republicans will "look for assistance to those making $40,000 a year or less."

Stimulus checks continue to be a point of dispute as President Donald Trump continues to push for more payments, while many congressional Republicans are opposed to checks entirely at this point.

A top Republican said Monday he opposes a new round of individual checks.

GOP Sen. John Cornyn of Texas told reporters he's "not sure" another round of payments is "the best use of the money," and argued the previous stimulus checks, in his view, were a "temporary measure."

In a floor speech Tuesday, McConnell broadly outlined what will be in the GOP proposal of the next coronavirus relief package that is likely to sit around $1 trillion, which senators expect to be unveiled by mid-week.

He said it will also include $105 billion toward reopening schools, as well as another round of targeted PPP payments "with a special eye toward hard hit businesses."