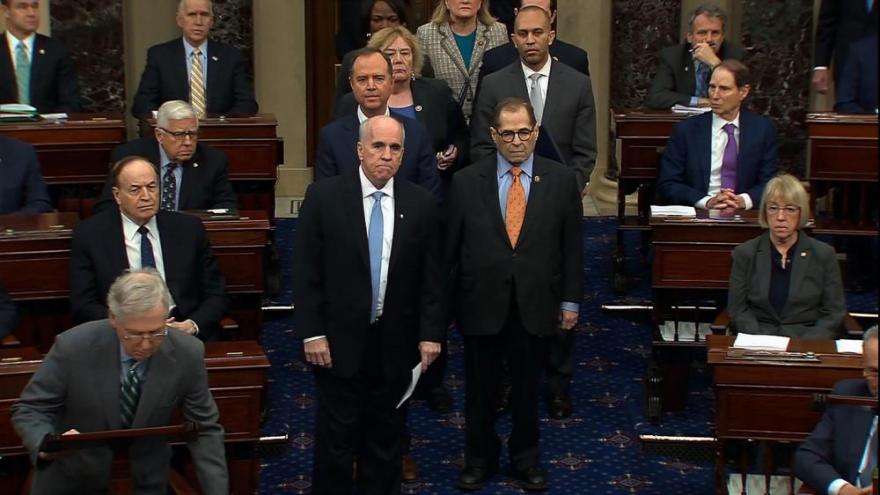 The Senate impeachment trial against President Trump has officially started.

(CNN) -- The third Senate impeachment trial of a US president in history convened on Thursday with the reading of the impeachment articles against President Donald Trump and the swearing in of Supreme Court Chief Justice John Roberts and the senators who will decide whether Trump should be removed from office.

The Senate conducted its ceremonial functions of the impeachment trial on Thursday before the actual arguments will get underway next Tuesday. House Intelligence Chairman Adam Schiff, a California Democrat and the lead impeachment manager, read the articles aloud in the chamber while senators looked on from their desks.

Roberts was sworn in shortly several hours later. After Roberts swore in the senators, each present member of the chamber came forward and signed the oath book on the floor of the Senate.

The outcome of the trial is all but determined, as the two-thirds vote required to remove the President would need 20 Republican senators to break ranks. But that doesn't mean the trial itself won't have twists and turns — and potentially some surprises — as Senate Majority Leader Mitch McConnell navigates the demands of his Senate conference, pressures from Democrats and the whims of Trump and his Twitter account.

Already this week, indicted Rudy Giuliani associate Lev Parnas has upended the impeachment conversation by providing the House Intelligence Committee with a trove of evidence about his work with Giuliani's efforts to oust former US Ambassador to Ukraine Marie Yovanovitch last spring and then pressure Ukraine to investigate former Vice President Joe Biden and his son Hunter Biden.

And the Government Accountability Office, a nonpartisan congressional watchdog, said Thursday that the Trump administration violated the law when it withheld Ukraine security aid that Congress has appropriated.

That evidence is likely to be incorporated into the House Democratic case against the President, which they will begin presenting next Tuesday when the substance of the trial gets underway. Democrats charge that Trump withheld the security aid and a White House meeting from Ukraine while pushing for an investigation into the Bidens.

On Thursday, the Senate dispensed with the ceremonial functions of the impeachment trial.

The House impeachment managers began the proceedings by reading aloud the two articles of impeachment on the floor of the Senate. It was the second time they took the articles from the House to the Senate — the managers took the same walk on Wednesday to notify the Senate of the articles, in an odd bit of ceremonial flair that comes with an impeachment trial of the President.

The Senate officially issued a summons to the President after senators were sworn in to notify him of the trial, and McConnell set up a series of deadlines for trial briefs to be filed by both the House impeachment managers and the President's legal team.

The trial is set to resume on Tuesday at 1 p.m. ET, McConnell said, at which point the Senate is likely to take up a resolution setting the rules of the trial. Then arguments will get underway.

Senate Democratic leader Chuck Schumer of New York said the Parnas allegations and the GAO report "strengthen our push" for witnesses and documents in the trial. He added that "no witnesses would be a dramatic break with precedent."

During his news conference, Schumer said he expects votes on Tuesday to try to force Republicans to take a position on witnesses. But he said he wouldn't know for sure until he sees McConnell's organizing resolution.

Asked if he would be in communication with House impeachment managers and Pelosi as they craft their strategy, Schumer acknowledged that he would confer with them but argued it was different from McConnell taking cues from Trump.

"We are taking our cues from nobody," Schumer said.

One senator, Oklahoma Republican Jim Inhofe, was not present Thursday and not sworn in. Inhofe spokeswoman Leacy Burke said he was in Oklahoma with a family member facing a medical issue, and planned to return to Washington to be sworn in for the trial on Tuesday.

The trial is only beginning this week after House Speaker Nancy Pelosi withheld the formal sending of the articles for four weeks while Democrats pushed for Republicans to agree to calling witnesses and obtaining new documents for the trial.

Pelosi said at her weekly press conference Thursday that Senate Republicans are "afraid of the truth," when asked what her response is to Senate Republicans who say they shouldn't have to consider new evidence like the Parnas material because it wasn't included in the House investigation.

McConnell on Thursday criticized Pelosi on the Senate floor for distributing souvenir pens while signing the impeachment articles on Wednesday.

"Nothing says seriousness and sobriety like handing out souvenirs, as though this were a happy bill-signing instead of the gravest process in our Constitution," he said.