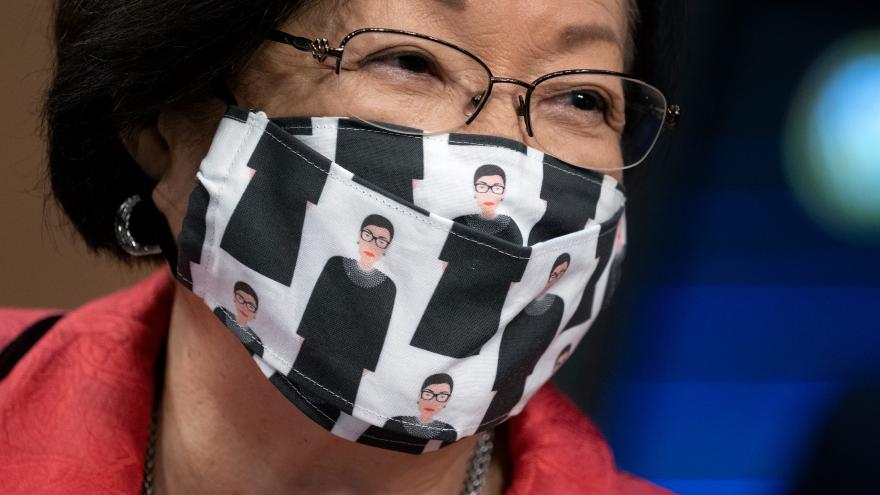 The Senate is expected to pass on April 22 a bill denouncing discrimination against Asian communities in the United States, and create a new position at the Justice Department to expedite reviews of potential Covid-19-related hate crimes. The bill is sponsored by New York Democratic Rep. Grace Meng and Hawaii Democratic Sen. Mazie Hirono. - Stefani Reynolds/Pool/Getty Images

(CNN) -- The Senate passed with a wide bipartisan majority Thursday a bill denouncing discrimination against Asian communities in the United States, and creating a new position at the Justice Department to expedite reviews of potential Covid-19-related hate crimes.

The vote was 94-1. The lone vote in opposition was from Missouri Republican Sen. Josh Hawley.

The bill would also direct the departments of Justice and Health and Human Services to issue guidance raising awareness of hate crimes during the pandemic, and work with agencies to establish online reporting of them. It now goes to the House before being signed into law by President Joe Biden.

Senate Majority Leader Chuck Schumer said Thursday that the bill is "proof" that "the Senate can work to solve important issues," and would tell bigots "we're going after you."

The bill, sponsored by New York Democratic Rep. Grace Meng and Hawaii Democratic Sen. Mazie Hirono, gained momentum after the shootings of six Asian women in Atlanta on March 16 drew even more attention to the rise of anti-Asian violence over the past year.

Some Republicans were initially skeptical about the legislation known as the Covid-19 Hate Crimes Act but Maine GOP Sen. Susan Collins and others teamed up with Hirono to strike an agreement broadening its support.

Hirono said Thursday that the bill's passage "sends a clear and unmistakable message of solidarity" to the Asian American and Pacific Islander community. Collins said it "affirms our commitment to stand with" them against hate crimes.

In a tweet Thursday evening, Hawley explained that his opposition stemmed from what he called "big free speech questions" raised by the legislation.

"My big problem with Sen Hirono's bill that Senate voted on today is that it turns the federal government into the speech police - gives government sweeping authority to decide what counts as offensive speech and then monitor it," he said.

Hirono and other Democrats have also pressured Biden to include more Asian Americans and Pacific Islanders in top roles. Biden has since named Erika Moritsugu, a former official at the National Partnership for Women & Families and counsel to Illinois Sen. Tammy Duckworth, as a liaison to the AAPI community.

Of the 23 Cabinet-level positions requiring Senate consideration, Biden nominated two Asian Americans: Katherine Tai for trade representative and Neera Tanden for Office of Management and Budget director. Tai, the daughter of immigrants from Taiwan, was confirmed as the first woman of color to be the top US trade negotiator.

But Tanden's nomination failed after West Virginia Sen. Joe Manchin, a Democrat, announced his opposition due to her long string of comments attacking Republicans.

This story has been updated with Hawley's tweet about his vote.