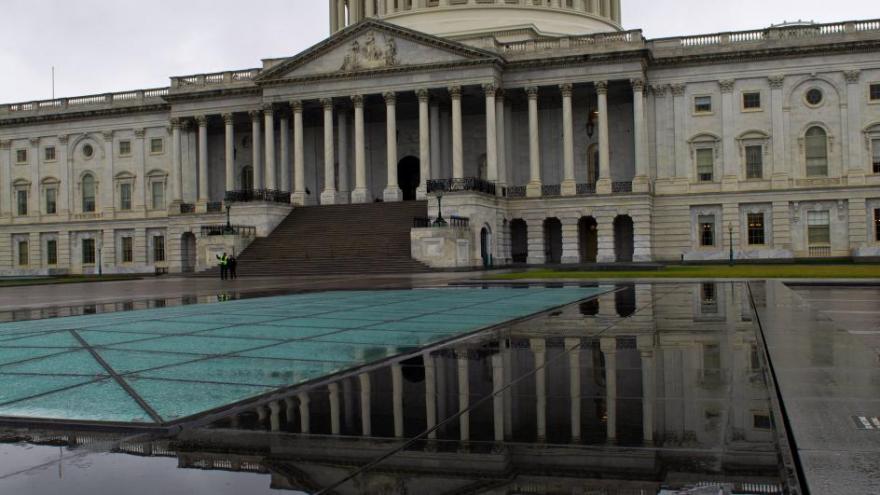 The Senate parliamentarian has ruled against including the increase in the minimum wage in the Covid relief bill.

(CNN) -- The Senate parliamentarian has ruled against including the increase in the minimum wage in the Covid relief bill.

While Democrats had pushed for the increase to be included -- and leadership expressed its disappointment in the ruling Thursday evening -- its removal may actually make it easier to pass the bill, senior Democratic sources believe, because it'll avoid a messy fight over whether to strip it out of the bill and whether to compromise.

"President Biden is disappointed in this outcome, as he proposed having the $15 minimum wage as part of the American Rescue Plan," White House press secretary Jen Psaki said in a statement. "He respects the parliamentarian's decision and the Senate's process."

For now, far from being a defeat, the ruling is viewed as clearing the way for the bill's passage in the Senate, a Biden administration official told CNN.

House Speaker Nancy Pelosi said Thursday evening the provision will remain in the House bill on which the chamber is voting Friday. However, the parliamentarian ruled that the increase to $15 per hour did not meet a strict set of guidelines needed to move forward in the Senate's reconciliation process. That means that the House will pass its bill, the Senate will have to strip the minimum wage provision out, and then eventually the House will have to pass that bill again at the end of the process.

But the ruling likely makes it easier for Senate Majority Leader Chuck Schumer to get his members in line behind the bill since the rise in the minimum wage had been a key sticking point for moderates like Sens. Kyrsten Sinema of Arizona and Joe Manchin of West Virginia.

There are no viable options to use the procedures in the Senate to keep the wage hike in the bill.

White House officials, cognizant of the potential math problem with Senate Democrats if the minimum wage increase were in the final package, had been counting on the provision being stripped, the administration official told CNN.

While there had been discussions about what would occur if it weren't, President Joe Biden's top advisers were fairly certain it would come out -- something Biden himself alluded to several times publicly.

The parliamentarian's ruling takes a significant potential hurdle out of play, officials acknowledged. While Biden will make a push to pass a standalone increase, officials know it has no path in the Senate due to Republican -- and Democratic -- opposition.

"We are deeply disappointed in this decision," Schumer said in a statement following the ruling. "We are not going to give up the fight to raise the minimum wage to $15 to help millions of struggling American workers and their families. The American people deserve it, and we are committed to making it a reality."

The parliamentarian's decision marks the end of a multi-weeks effort by Senate Budget Chairman Bernie Sanders, an independent from Vermont, to include the provision in the relief bill.

"I strongly disagree with tonight's decision by the Senate Parliamentarian," Sanders said in a statement Thursday evening. "The (Congressional Budget Office) made it absolutely clear that raising the minimum wage to $15 an hour had a substantial budgetary impact and should be allowed under reconciliation. It is hard for me to understand how drilling for oil in the Arctic National Wildlife Refuge was considered to be consistent with the Byrd Rule, while increasing the minimum wage is not," Sanders added, referring to the rule -- named after the late Sen. Robert C. Byrd -- that prohibits including "extraneous" measures as part of the budget process that Democrats are employing to send the Covid-19 relief package to Biden's desk by early March.

"Let's be clear: raising the minimum wage is COVID-19 relief," Washington Rep. Pramila Jayapal, the chair of the Congressional Progressive Caucus, said in a statement responding to the ruling. "We simply cannot go back to the Black, Brown, AAPI, Indigenous, poor and working class voters who delivered us the White House and the Senate majority and tell them that an unelected parliamentarian advised us -- based on arcane rules -- that we could not raise the minimum wage as we promised," she added, calling on the Senate to reform the filibuster "to allow populist and necessary policies like the $15 minimum wage to pass with a majority of the Senate."

Progressive Democratic Rep. Alexandria Ocasio-Cortez of New York told CNN earlier this week that she would still support the Covid relief package if the parliamentarian were the one to remove the minimum wage provision, but not if politicians had been the ones to take it out. For Ocasio-Cortez, members of her own party removing or lowering the minimum wage would have made the bill fall apart. Rep. Ilhan Omar, a progressive Democrat from Minnesota, echoed those sentiments.

Senate parliamentarian Elizabeth MacDonough, a little known but powerful Senate official, had been thrust into the spotlight this week, with Democrats eager to see whether the minimum wage increase would survive in the President's relief package. MacDonough is the first woman to serve in the role of Senate parliamentarian -- a nonpartisan role -- since that position was created in the 1930s.